The WTF? Worst Films Extravaganza Presents: Class of Nuke 'Em High 3: The Good, The Bad and the Subhumanoid (1994) 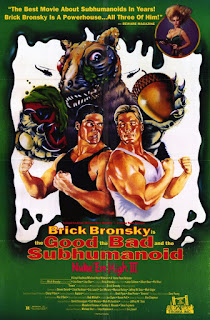 
PLOT
Continuing where CLASS OF NUKE 'EM HIGH PART II: SUBHUMANOID MELTDOWN concluded, Tromie [the mutant squirrel destroying the Tromaville Institute of Technology] is defeated by a bomb shaped like a large acorn. Finally having the opportunity to be together, ace reporter for the Troma Tech Times Roger Smith (Brick Bronsky) and his Subhumanoid girlfriend, Victoria (Leesa Rowland), fall more in love. Soon enough, they both learn that Victoria is pregnant, not knowing she's pregnant with twin boys.

The day when Victoria gives birth, however, scientist Professor Holt (Lisa Gaye) and some corporate scumbag Dr. Slag, PHD (John Tallman) steal one of the twins without Roger's or Victoria's knowledge [Holt and Slag have no idea Victoria was pregnant with twins either]. Victoria gives birth to the second child, but dies due to the trauma of the delivery. Roger, just glad to have gotten a healthy baby out of this horrible ordeal, decides to take great care of his son, who he names Adlai (Brick Bronsky in a second role). Adlai is a great guy and a model citizen, who's in love with an activist named Trish (Lisa Star).

Meanwhile, Holt and Slag raise the other twin, who they name Dick (Brick Bronsky in a third role). Unlike Adlai, Dick is raised to be evil and a soldier for Slag's goals. When both twins learn that they have superpowers, due to their half Subhumanoid genetics, they realize that they're a piece of them missing and feel a connection to each other. When Holt and Slag realize that Adlai and Dick are twins, they want to use both together as a way to control the world.

I have three words for CLASS OF NUKE 'EM HIGH 3: THE GOOD, THE BAD, AND THE SUBHUMANOID:


HITS
- Some of the jokes work. 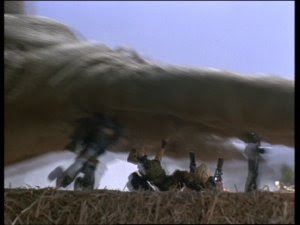 CLASS OF NUKE 'EM HIGH 3 is more of a comedy than a sci-fi/horror film, spoofing other works of literature and cinema, including its own franchise. Most of the time, the jokes are dead on arrival [I'll get to that in a bit]. But some of them do achieve some chuckles and laughs, so it's not completely terrible. There are a bunch of dick jokes throughout the film [since one of the Smith brothers is named "Dick"], with some of them actually being kind of funny but eventually running their course quickly. Some of the weird dubbing is kind of humorous at times. There's also a scene where a werewolf is taken care of by hitting it with a rolled up newspaper. It's stupid, but I just found it oddly funny.

I thought the funniest stuff was during the end credits, where the names are changed or the cast and crew are being goofed on for the benefit of the comedy. For example, the stand-in for Brick Bronsky was Brick Bronsky himself. Unfortunately 95 percent of the script is either corny, or not funny at all. So I'll cherish the moments that do make me laugh with this awful sequel.

- The "special effects". CLASS OF NUKE 'EM HIGH 3 is obviously a low budget affair, so the quality of the effects can't be top notch. But for what effects that are used, they aren't too bad. The main one is the glowing arms both twins possess that unleash a ton of power, which is pretty much the only computer generated effects of the film. We have the return of Tromie the Squirrel, who is still a man in a rubber costume on a model set of the actual location. We also have some werewolf thing that looks okay. It's not the greatest or anything, but it's something considering the low budget of this flick. I'll take what I can get at this point compared to the rest of this mess.


MISSES
- Terrible screenplay. Where do I begin? CLASS OF NUKE 'EM HIGH 3 is loosely based on William Shakespeare's Comedy of Errors, which details a set of twins who were separated at birth - leading to funny mishaps when others confuse the one for the other. Stick with the classics, because while the film does a variation of this, it does it in the most dull, unfunny, and shallowest way. I like the inspiration and the premise because you could really play around with it. There are some moments where Adlai and Dick are confused for the other [even though one is blonde and the other has black hair] and it leads to chaos. But there's not much of it other than that, as the film is more focused on silly gags and dumb jokes.

For example, every time Trish appears, we see a close up of her butt which leads to a farting sound. The first time it's funny because you don't expect it. But it keeps happening until the film ends. If the film is trying to pass Trish as this hot, desirable chick [honestly, she isn't all that], why have her constantly fart? Makes no sense.

The dick jokes get old really fast. There's this huge subplot about a boll weevil that doesn't really go anywhere or effect the film in any substantial way. And my main beef is the fact that the film is very much full of exposition. In fact, much of the film is told in narration and explaining things that are going on the screen. I'm not mentally challenged. I can see and understand what I'm watching. I don't need someone else telling me what's going on when I'm already experiencing it. It's a bad storytelling tool and it's just plain annoying. Also, a lot of the dialogue happens to be dubbed, as if something was lost during the production stage in terms of audio. The dubbing just makes the whole film sound worse than it already was, with characters saying things are not funny or things that don't move the film along at all. I honestly can't believe that it took EIGHT WRITERS to come up with this screenplay. Just awful.

- Bland direction. Eric Louzil doesn't bring much style to this film, which it definitely needed to compensate for the bad story. It's directed as a point-and-shoot movie, with the usual angles and framing and such. There's nothing really visually interesting about this film. The action scenes aren't really exciting. The comic timing is a bit off. The pacing is terrible, as the film is way too long and it makes CLASS OF NUKE 'EM HIGH 3 feel longer than it actually is. It doesn't work as a comedy. It doesn't work as a science fiction movie. It's definitely not horror. And if this film was trying to be a spoof, it fails miserably. Just a bland visual presentation.

- Acting worse than usual. I expect 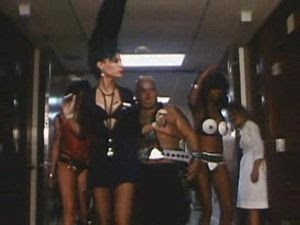 terrible acting in a Troma film, but these actors just grated me. Brick Bronsky is still okay, but I felt he could have played his different roles...well, differently. Even evil Dick still felt a bit like Adlai and Roger Smith, even if Bronsky did show some range that made the villain stick out a bit. Lisa Gaye, my favorite actor of the sequels, is still pretty cool as Professor Holt. I wish she was in the film more. Lisa Star as Trish was pretty bad. It was funny at first, but it lost its luster towards the end. I know it's a B-movie and all, but there seemed to be a drop off in the acting from the second to the third film. The script didn't help the acting either, so I can't totally blame the lack of thespian goodness on just the actors alone. It's pretty poor, even for Troma standards.


THE FINAL HOWL
CLASS OF NUKE 'EM HIGH 3: THE GOOD, THE BAD AND THE SUBHUMANOID is a misfire for a cult franchise that started off really well. It doesn't fully succeed as a comedy. It's not scary. It's not memorable. I honestly can't recommend this film at all to anyone. When fart and dick jokes are your focus rather than the actual inspiration for the twin brothers that could have created a decent sequel, it doesn't deserve to be watched. This film is going to the WTF? Vault where the other inductees can nuke this sequel from oblivion as it'll...