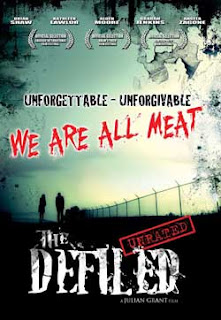 
PLOT
In a post-apocalyptic world, a virus outbreak has infected much of the human population, turning them into something like cannibalistic zombies. The government is hunting down those infected, killing them in order to solve the problem they probably created.

We follow one infected family headed by Yar (Brian Shaw), who tries to keep his pregnant wife (Alden Moore) and two children safe from being captured and killed. Knowing his family wants some human flesh, he goes hunting, finding a body inside a tent, not realizing that there are radioactive warnings all around the corpse. He lets his family take the corpse for dinner while passing on it and drinking from a liquor bottle the corpse had on him instead.

The next day, Yar finds out that his family are now incredibly sick, to the point that each one of them dies. Yar does manage to save his newborn son by literally extracting him from his wife's corpse. Yar realizes he's his son's only hope for a better future, leaving his family behind and looking for some sort of haven. Along the way, he saves an uninfected woman named Janice (Kathleen Lawlor), who was about to be murdered by two infected humans. Although they both seem untrusting of each other at first, Yar and Janice come to sort of a truce as he lets Janice help him with his son. Will these three be able to start a new family? Or are their fates doomed?

exposed zombie film. Presented in an arthouse sort of way, THE DEFILED focuses on the zombie's [or infected person's, in this case] point of the view of the situation rather than a human. Instead of survivors scrambling together to make sure they survive the outbreak while bickering on a good plan, THE DEFILED lets us in on the world of the infected themselves, making us witness what they need to do in order to survive. They communicate like cavemen [losing all intelligent speak], hunt for human flesh, and eat it to survive. They also have to hide from those who created them, knowing that they're hunting them down like dogs. It's an original and fascinating concept that I'm really surprised other filmmakers haven't latched too much on, although some have created more intelligent zombies that interact like humans would [like in DAY OF THE DEAD, FIDO, and LAND OF THE DEAD].

THE DEFILED is also strong due to the fact that it has an infected character teaming up with a healthy human as they go on the run to protect themselves and Yar's newborn. As humans, we know another human is capable of love, protection, and the willingness to sacrifice themselves to save someone we deeply care for. But Yar's portrayal is more profound as, in a lot of ways, lost a lot of his human side due to this disease he's suffering from. His mind and behavior has degenerated into nothing but instinctual knowledge and feelings. He's like an animal in a lot of ways - doing anything to survive while remaining loyal to his family. The fact that Yar still has human feelings of compassion and love for his son is a great character trait and makes the audience support him throughout the film. It also makes his alliance with Janice more effective as even though they're now different, they both have the same feelings for each other and for the baby. It's a great display of showing that two different people, one diseased and the other not, are both the same. This gives the hunters more of a villain feel since they want to destroy this due to being afraid of the outbreak spreading, even though they were probably a part of it or working for those who were.

THE DEFILED also has to contend with the fact that there is no actual dialogue in the film at all. We do have music and the characters do grunt and yell at each other, but no actual words are spoken for 100 minutes. It's a big challenge to keep an audience invested in a story that doesn't involve emoting with words. Instead, the acting has to really make up for this. And while sometimes, dialogue could have helped during duller moments in the film, I appreciate the boldness by Julian Grant to let the visuals do the talking rather than the characters making up the film.

I will say that THE DEFILED did bore me a bit at times, especially after the hour m 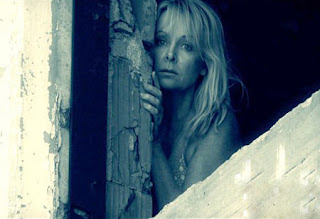 ark where Yar and Janice are walking around to different places that don't really move the story forward. I understand these scenes were kept in to show what society and civilization now looks like due to this horrible outbreak, but the film wouldn't have changed much if taken out. In fact, I feel as if this great concept would have been more effective as a shorter film. With less focus on establishing this world and more focus on the character's journey for salvation in a desolate civilization, THE DEFILED would have gotten better praise from people. But the film does lose its momentum for a while in the second half, although the final act does make up for it somewhat. Still, trimming maybe 25 minutes wouldn't have hurt the film at all.

DIRECTION - Julian Grant does a really excellent job bringing his vision to life. While I already mentioned the uneven pacing with certain dull scenes that could have been edited out, the rest of the visuals work better than one would expect from a film like this. THE DEFILED is shaded with a blue-grey tint to give off a look that was inspired by NIGHT OF THE LIVING DEAD (1968) and CARNIVAL OF SOULS. It actually gives the make-up work and special effects done for the infected [created by Robert Kurtzman] a more old-school, creepy look that looked pretty convincing of their condition. There is a moment where the film does go into a reddish tint, but it's during a dream or flashback sequence or something. The cinematography and camera work is very nice. The editing is solid, although Grant likes to fade-in and fade-out a lot, which can be a bit distracting and annoying. I would have loved a dissolve every now and then. I do have to give credit to Grant for taking on an ambitious project and making it work for the most part. It'd be interesting to see what he can do with a bigger budget and some dialogue.

EDGE FACTOR - Language is N/A. There is a sex scene, but nothing that's graphic at all. As for the violence, there are gunshots and physical grappling. But it's pretty tame stuff considering the other opinions out there in this very sub-genre.

ACTING - There are really only two main actors in the film. Brian Shaw was excellent as Yar. His role involved a ton of body language and he used it really well to convey every emotion he had to portray without speaking. I thought he carried the film like a champ. Kathleen Lawlor was decent as Janice. She had good moments, but I wished she'd show more expression with her face. She usually had the same face for much of the film. But I thought the two had nice chemistry as they worked well off of each other.

SPECIAL FEATURES - The DVD for THE DEFILED comes with a few features. One is a feature-length commentary track with actors Brian Shaw and Kathleen Lawlor, pretty much giving audiences information about the film's production and discussing their time filming the movie. Other stuff includes "Slide Show", which is a 4-minute slideshow of stills from the film, "Home Movies", which is 2-minute test footage that's not really explained. And of course a trailer for the film itself. 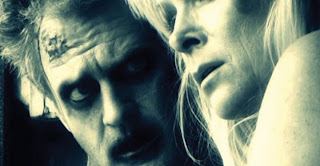 THE DEFILED is a film that's high on ambition and meets it for the most part. I still feel that this film would be stronger as a short, as the second half does drag on a bit without dialogue. But the film is unique and interesting enough for me to recommend it to those who want to see something different and more artsy done with the typical zombie film.