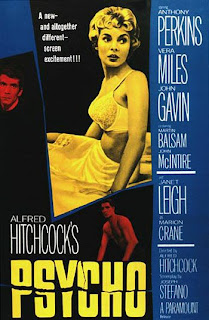 DIRECTED BY
Alfred Hitchcock
STARRING
Anthony Perkins - Norman Bates
Janet Leigh - Marion Crane
Vera Miles - Lila Crane
John Gavin - Sam Loomis
Martin Balsam - Det. Milton Arbogast
Genre - Horror/Suspense/Slasher
Running Time - 109 Minutes
Score - 4 Howls Outta 4
There is no terror in the bang, only in the anticipation of it. - Alfred Hitchcock
Fifty years ago, a movie was released that terrified audiences from taking long showers and changed the face of what horror films were supposed to be forever. It's been studied in film classes. It has inspired the slasher sub-genre. It's been parodied. And it's definitely been homaged. Alfred Hitchcock's PSYCHO is a movie that has been loved, admired, and respected for its contributions to horror and general cinema. Even with good sequels and an unfortunate remake, PSYCHO has stood the test of time and has become a pop culture phenomenon. It's both a popcorn movie and a work of art - how many other films can honestly say that?
PLOT
Marion Crane (Janet Leigh) is at a crossroads. She wants to marry her lover, Sam Loomis (John Gavin), who is dealing with huge debts due to ailmony payments and his late father. Desperate for money, Marion decides to steal and run away with $40,000 - a cash transaction that her boss asks her to deposit in the bank. While driving to see Sam, her guilt and fear continues to grow. When a rainstorm hits during her drive, Marion stops at the Bates Motel, which has twelve cabins for twelve vacancies. The motel is run by a nervous, yet talkative Norman Bates (Anthony Perkins), who lives in a big house by the motel with his sick mother, who berates Norman any chance she gets. Feeling sorry for Norman, Marion decides to befriend him. The two share their stories, almost becoming kindred spirits in a way, both looking for a way out, yet not wanting to leave at the same time. After the talk, Marion decides it's best if she returns home with the money in the morning. Before going to bed, Marion decides to take a shower. Unfortunately, Mrs. Bates is ready for a shower herself...
REVIEW 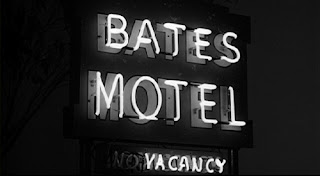 What can I say that hasn't been said about PSYCHO? It's considered Alfred Hitchcock's last great film, even though THE BIRDS, which was released in 1963, is a good film. The audience was absolutely frightened by the film at the time. People fainted. People became ill. The twist ending had people talking. The film made a lasting impression on audiences in 1960. The fact that many of us still talk about PSYCHO proves that the impression hasn't stopped lasting fifty years later.
The screenplay for PSYCHO was written by Joseph Stefano, based on a novel by Robert Bloch, who would go on and write the excellent Joan Crawford vehicle, 1964's STRAIT-JACKET. The novel was based on infamous serial killer Ed Gein, who was also the basis for Leatherface in THE TEXAS CHAINSAW MASSACRE. The novel and the adaptation changed horror forever, as it moved away from the fantasy Universal Monsters into a more realistic genre.
PSYCHO has a fantastic script, due to its structure and its pacing. The first 50 minutes of the film is one big tease and a false seduction that guts the viewer when the first twist of the film occurs. The focus is on Janet Leigh's Marion Crane character, as she escapes with stolen money in search for a new life with the man she loves. Just the way the scene comes together is brilliant. We learn about Marion's character through her actions and her feelings about the world around her. She's always paranoid about something or someone, whether it's that pesky cop who wakes her up in the middle of the road and follows her to a car lot, and to her boss who she encounters on the way out of town. We're put in Marion's position as we start to connect with her character, feeling apprehensive and a bit nervous along with her. We want her to escape with this money. We want her to run away with Sam. And then after she has that talk with Norman Bates, we want her to repent and bring the money back. And just when you think things will be okay, Marion is killed off in probably the most famous horror scene of all time [which I will go to shortly].
While modern audiences aren't as gullible by this act [SCREAM pretty much took that suspense away by killing off major stars before the opening credits], I can't imagine what people thought of this back in 1960. They must have been shocked, appalled, and scared out of their minds. If the main character and lead actress isn't safe, then who in the hell is? Fifty minutes of caring for a flawed, yet human character - snatched awa 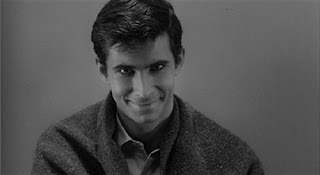 y from us for a scare. It's really messed up, yet so brilliant and so respected. Why? Because now the audience has no idea what will happen in the last half of the film, creating a roller coaster ride that no one expected to be on.
I think the script is also great because all the characters are flawed in their own way. There's no hero here. Is Norman Bates a villain? Who's to say since he believed he was doing the right thing over covering up the murders and protecting his "family". Everyone is a victim in this film. They terrorize each other and themselves. There's no true protagonist or antogonist here. Pretty ballsy stuff.
And I can't not discuss some of the themes created in the horror genre by PSYCHO. This film definitely dips its feet in the sexual pool of psychoanalysis. Just like in the later giallo and slasher films, that took many of its themes and motifs from PSYCHO itself, sex is the enemy. The first real image of the film is Marion Crane in a hotel room after having sex with Sam, wearing a black bra that must have been considered scandalous back in 1960. And was there only one bed? People must have had a heart attack. It's an erotic image for sure. Then we get Norman peeking through a hole to watch Marion undress. The remake took this moment an unnecessary step further, but the point is still clear: her sexuality is a sin and it has to be taken care of. And that's when murder comes into play. She's too provocative for stirring the urges that Norman keeps supressed due to his mother, and his mother has to clean up the mess. Sexual freedom has to be restricted, which is what we see in probably 85 percent of horror films since the release of PSYCHO. And let's not forget the mother-son relationship, which is creepy in itself.
The real star of PSYCHO is Alfred Hitchcock himself. His direction is impeccable here. The film is black and white, which is ironic since all the characters are in shades of grey internal-wise. The locations are almost gothic and pretty bland to look at. Yet the cinematography is stunning and the editing is crisp. And just the way the film flows shows the work Hitchcock put into this film, by creating storyboards of each scene to make sure they were all shot to perfection. The film could have been really sleazy, but he created a work of art here. Watching it again, I noticed how many clues, symbols, and moments of foreshadowing there were. It all makes the shock ending that much better and logical. It was like watching the movie again for the first time. And obviously, the most famous scene [and most talked about in horror classes] is the shower scene that ends the first half of the film and starts the second. It's one of the most brilliantly edited and directed [both visually and in sound design] moments of cinema. 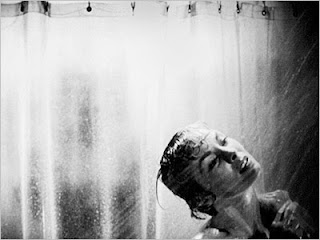 This scene took six days to shoot and was shot in 77 different camera angles. For a three minute scene, there are 50 cuts. We get close ups, medium shots, overhead shots, narrow angles, wide angles - it's all here. And these cuts make the scene longer than what it probably is in real time. It's a very controlled and violent scene, even though we don't see the knife penetrating skin or any gore at all. The music by Bernard Hermann [who does masterful work here with adding tone and atmosphere with his score], Janet Leigh's screaming, and the knife sound effects [made by cutting a melon] add to the intensity of the scene. There's an actual book that analyzes this one three-minute scene, proving without a doubt that this is the exact moment that horror was changed. Hell, Brian de Palma has been using Hitchcock's aestethic for years. And John Carpenter was definitely inspired by Hitchcock when he made HALLOWEEN, which is probably the greatest homage to this movie. Just fantastic direction by one of cinema masters. An Oscar nomination well-deserved.
The acting in PSYCHO is top-notch. Anthony Perkins truly made a star-making turn as Norman Bates, creating a creepy, yet sympathetic character all at once. And the fact that Perkins used certain characteristics, such as the candy corn thing and the nervous ticks, to give Norman depth shows how much he understood the character. Unfortunately, he was so good in the role that he was typecast for the rest of his career until his passing in 1992. Janet Leigh is also memorable as Marion. While down to earth, she's so passionate in her desperation and driven in her sensuality. Hitchcock loved his blondes, and Leigh was one of the classiest actresses in his many films. And her shower scene has lived on for generations, especially through her daughter, Jamie Lee Curtis. The other actors, such as Vera Miles [who would return in the 1983 surprisingly excellent sequel, PSYCHO II], John Gavin, and Martin Balsam are all devices to the plot. But they all give solid performances and the film wouldn't be memorable without them.
THE FINAL HOWL 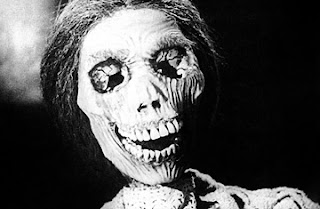 Would I recommend PSYCHO? Duh! It's a classic for a reason and just a wonderful film. And if you do plan on buying this film, the two-disc edition that recently was released is the way to go. From a great documentary, to a newsreel about the insane and brilliant marketing for this movie, PSYCHO is more than worthwhile. It's a fantastic horror movie by a master of suspense and horror. Hell, it's a fantastic movie period.
Posted by Fred [The Wolf] at 4:21 PM