The Watchtower of Justice: The Avengers (2012) 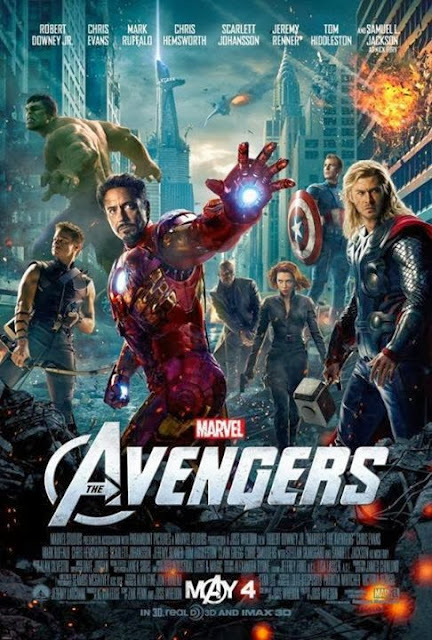 When Marvel decided to form their own studio and started building solo superhero movies that existed in the same universe, fans were pumped for the inevitable Avengers team up movie that would be the icing and cherry atop an already delicious cake. Iron Man and The Incredible Hulk in summer 2008. Iron Man 2 in summer 2010, which was basically a prelude to The Avengers. Thor and Captain America: The First Avenger in Summer 2011. And now the moment fans old and new had been waiting for: The Avengers in an already packed superhero movie summer in 2012. Going up against both Batman (The Dark Knight Rises) and Spider-Man (The Amazing Spider-Man) is never an easy task to pull off. But The Avengers was the highest grossing film that summer and beat out The Dark Knight, which before Avengers was considered the best superhero movie of all time. Now, fans are kinda divided on which one deserves that mantle. While I do love The Avengers and it is the best Marvel Studios movie aside from Thor and Iron Man 3, I still prefer The Dark Knight Trilogy, Man of Steel, and The Amazing Spider-Man for personal reasons. I didn't grow up with The Avengers the way I'm sure many kids who loved superheroes did. Yes, I had heard of Iron Man and Captain America, but aside from the outfits and names, I didn't know shit about them. Yes, I knew who The Incredible Hulk was, mainly due to the short animated series. But all the others? Nope. Growing up, Batman and Spider-Man were and still are my top two favorites in the costumed hero department. Superman was popular on TV. The X-Men were a hit in animation. So, while I still love The Avengers and am a new fan, I will always have Batman, Spider-Man, and Superman closer to my heart. But that's not to say that I wasn't super excited to see Iron Man, Hulk, Captain America, Thor, Black Widow, and Hawkeye take on aliens and the God of Mischief!

Loki survived his fall into a black hole and has come to Earth to steal the source of power that S.H.I.E.L.D has in their possession. First, Loki puts a spell on Dr. Selvig and Hawkeye to help him open a portal that could damn our world. This causes S.H.I.L.D's director Nick Fury to take action by assembling a team of the most powerful people on this planet. Those powerful people are Tony Stark/Iron Man, Steve Rogers/Captain America, Thor, and Dr. Bruce Banner/Hulk. Together they form a super fighting force to stop Loki from letting aliens destroy New York City.

I will never forget my theatrical experience with The Avengers. I went with my Dad opening night and the showing we were going to see was already sold out, so we went ahead and bought tickets for the next show. We sat around in the van for a little bit till it was close to time for the movie to start. Just about every damn row from the very front to the very back was jam packed full of everybody from the elderly to parents taking their children.  I remember getting the distinct pleasure of sitting next to some big guy who had serious B.O. and having some boys sitting in front of me giggling and texting during the show. But, once the lights dimmed and the movie began, I forgot all about those annoying little boys, or my nose begging me for Oxygen. You know why? Because I was having a total blast watching Iron Man and Captain America stand side by side, Thor knocking Iron Man across a forest, and who can forget Hulk giving Loki a professional ass whoopin'? Yep, that was The Avengers. A total blast of fun, excitement, amazing visual and special FX, Hulk/Bruce Banner finally done to perfection, aliens crashing through a city, explosions, Scarlett Johansson giving me a nice boner, Tony Stark making me laugh my ass off, and just being the definition of a summer blockbuster. It's that roller coaster that you want to catch the thrill again and again. Yes, I am not as attached as I am a Batman, Superman, or Spider-Man, but it doesn't matter. I had a great time at the movies despite the unpleasant theater conditions.

When I first heard that Joss Whedon was set to write and direct The Avengers, I was more than happy. This is the same man who gave me two kickass TV shows during my childhood with Buffy The Vampire Slayer and Angel. Sure, he had not had much movie making experience outside Serenity, which was the movie version of his short lived TV series Firefly. But, I always knew that Whedon had the potential to make it huge beyond the small screen and 2012 was the year of Joss Whedon with The Avengers and the horror film that he co-wrote and produced, The Cabin In The Woods. Whedon directs The Avengers with honor, respect, and love for these characters. The film never misses a beat, and Whedon's outerspace stuff looks frickin' phenomenal. If he hadn't already played in Marvel's toychest, I would have said that he would have been the perfect filmmaker to bring that Justice League film to life. Still curious who gets that gig unless Zack Snyder jumps up and decides to, or maybe Ben Affleck, although I have a feeling he will get to direct the solo Batman films.  Whedon also handles the screenplay well. We get that classic Whedon humor like when Stark tells Banner that he loves it when he turns into a giant green rage monster. And Hulk kicking Loki's ass certainly made me cheer and giggle in my seat, even though I had to hold the breathing part thanks to B.O. guy.  Nick Fury making a flying monkeys reference, and Captain America picking up on it made me chuckle. Speaking of Captain America, I LOVE his new suit. It's very classic Captain America whereas the suit in his solo film was more a military war suit. And that finale in New York City has gotta be one of the single greatest scenes in superhero cinema history. Words can't describe how awesome it was seeing all these characters come together as a team.

The cast was spot on in their respective roles. Robert Downey Jr. is Tony Stark/Iron Man. The dude has enormous humor and tons of charisma that you just love. He's the kinda dude you just want to chill with. Chris Evans was a great pick for Steve Rogers/Captain America. Finally, that 1990 movie is wiped away from the character's identity. Chris Hemsworth is still thunderously awesome as Thor. The man is the definition of a superhero.  Mark Ruffalo replaced Edward Norton, but ended up giving us the best portrayal of Dr. Bruce Banner/The Hulk applied to film. Ruffalo was a nice surprise. I hope he eventually gets that Hulk movie that he deserves. Scarlett Johansson is smokin' fuckin' hot as Natasha Romanoff/Black Widow. Plus, she can kick a lot of ass. My kinda woman! Samuel L. Jackson is great as the slick and cool eye patched Nick Fury. Clark Gregg is great as always as Agent Phil Coulson, who is most likely not dead and is sadly on that God awful Agents of S.H.I.E.L.D television series that failed to capture the awesomeness of these movies in every way. Jeremy Renner is really good as Agent Barton/Hawkeye. But, Tom Hiddleston just about steals the show in his reprisal role as Loki. I love Hiddleston's menace as a villain. You can tell that the guy is having a major blast playing this character and us audiences are therefore having a blast watching him having fun. Hell, the man even came to Comic Con in character and talked to the fans as Loki. So awesome, this guy.

Overall, The Avengers is the best Marvel Studios movie to date. Love it and look forward to Phase Two going forward and leading up to summer 2015's Avengers: Age of Ultron. The team will be expanding and the universe getting even more fascinating than it already is!