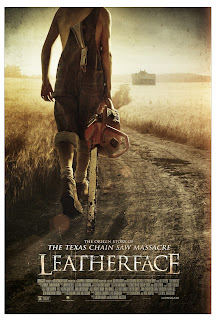 PLOT (from IMDB):
A teenage Leatherface escapes from a mental hospital with three other inmates, kidnapping a young nurse (Vanessa Grasse) and taking her on a road trip from hell, while being pursued by a lawman (Stephen Dorff) out for revenge.

2017’s TEXAS CHAINSAW MASSACRE prequel, LEATHERFACE, had a lot of hype among horror fans awaiting its release. Even though there was a mixed reaction to 2013’s TEXAS CHAINSAW 3D despite its classic line of “Do your thing, Cuz!”, the film was a financial success and was ready for a sequel. However, the studio and producers couldn’t agree on a story, creating the need for a prequel instead - even though there was already a prequel [THE TEXAS CHAINSAW MASSACRE - THE BEGINNING]. But I guess that was for the remake story and not for the original continuity that the franchise is back riding on [why are these horror franchises so confusing?]. Anyway, it was believed that audiences would appreciate an origin story for the franchise’s main character, Leatherface, explaining how and why he became the horror film icon we’ve all grown to love. Bring in INSIDE and LIVIDE directors Julien Maury and Alexandre Bustillo to helm the film, with Lili Taylor and Stephen Dorff as the leads, and you got some excitement for a film no one really asked for but still wanted to see nonetheless.

However, the production was troublesome. Either due to dissatisfaction from Maury & Bustillo, or from Lionsgate itself, reshoots and multiple edits delayed the release of LEATHERFACE by two years. It also didn’t help that its potential theatrical release was dropped, settling for a DirecTV release in September before hitting all VOD platforms a few weeks ago. Unlike many years ago, the direct-to-video stigma no longer exists. But its distribution made many question whether LEATHERFACE was worth the watch. And while it’s not a terrible film, LEATHERFACE just ends up being pointless and a victim of an identity crisis.

Let’s just get the good stuff out of the way:

LEATHERFACE is a well-made movie. Maury & Bustillo try to bring back a lot of the lighting and feel of the original Tobe Hooper classic in LEATHERFACE, giving the film a classic look while maintaining a modern vibe that modern fans could probably appreciate. The action sequences involving the more brutal moments of the story are shot really well, with the directors attempting to bring tension and cringe-worthy moments that could leave some feeling uncomfortable - and others feeling like they’re back home in Leatherface’s world. There are scenes that are definitely meant to shock audiences, including a moment where a couple have sex while a break out is happening inside a mental asylum. This same couple also have sex on top of a corpse in a later scene. It’s grotesque and disturbing, which is exactly what this franchise should be capitalizing on. It’s edgy where it matters, due to Maury & Bustillo understanding how to bring that kind of tone in a horror film like this one. 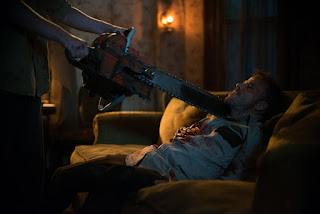 Speaking of the visual presentation, LEATHERFACE also has some nice gore effects. We get some grisly decapitations, lost limbs, faces getting mutilated, and the expected chainsaw murders. The film doesn’t hold back when it wants to be brutal, which I appreciated. It’s great stuff.

And I have to compliment the acting in this film. I thought the performances are very good here. Lili Taylor is a delight as Verna Sawyer, the mother of the clan. She takes the role seriously and brings something menacing subtle with her performance. While she does awful things to people, you can also sympathize with her situation as well. I wish she were in the film more, but I appreciated her commanding presence whenever she was on screen. Stephen Dorff was also good as Hartman, the Texas Ranger who wanted revenge on the Sawyer family for murdering his daughter. It could have been a one note performance, but Dorff brings enough dimension to his grief and feelings that you want to sympathize with his character arc - even if the character is heavily flawed in his actions. I thought Sam Strike was very charismatic as Jackson, while Vanessa Grasse played the classic role of “final girl” Nurse Lizzie well. Finn Jones played his part as well as the script would allow him to, while Christopher Adamson played the sinister doctor to a tee. I thought LEATHERFACE had a pretty great cast….

….It’s just too bad that the script and narrative is what ruins this film big time. Now, I wasn’t expecting this prequel to be as good as the classic 1974 film or its first couple of sequels. But I was expecting it to be better than TEXAS CHAINSAW 3D. Sure, LEATHERFACE is better made and better acted. But TEXAS CHAINSAW maintained a consistent tone and mood, while feeling like a modern day TEXAS CHAINSAW MASSACRE film for a newer generation regardless of its quality. LEATHERFACE only feels like a TEXAS CHAINSAW film during its opening few minutes and during the end of its final act. It’s almost as if the screenwriters forgot what film was supposed to be a prequel for. 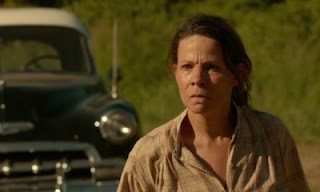 The tone of this film suffers from a schism it can’t recover from. We have a vengeful sheriff who feels more comfortable in THE DEVIL’S REJECTS than he would here. Two members of the young cast that escapes the mental hospital [Clarice and Ike] shoot up a restaurant, have sex on top of a corpse, and act erratically around others. Did they audition for a prequel of NATURAL BORN KILLERS and stepped onto the wrong set? It honestly feels like a tamer version of a Rob Zombie film, but less memorable and less interesting. I don’t mind this film to be inspired by better movies, but maybe it should focus on what it’s really supposed to be - a prequel to THE TEXAS CHAINSAW MASSACRE. Even THE NEXT GENERATION did a better job at that than LEATHERFACE.

The worst part happens to be the treatment of the title character and how it goes against everything that has been established about him. During the narrative of the film, we’re never told which one of these escaped characters is the real Leatherface. Sure, we have characters that embody what we think Leather would look like when he was younger, but we’re never sure since names have been changed during most of the film. I don’t mind the mystery and I think it’s a decent twist if you never see it coming [I figured it out due to certain characters getting more screen time than others]. But the fact that this certain character ended up being Leatherface just felt odd and forced - as to swerve us along the way for a nice twist. But it could have worked if the script was stronger.

What I had real issue with was how this character suddenly became Leatherface. It seems he became the horror icon we’ve grown to love due to accidental circumstance, rather than a prolonged series of events that twisted his mind and body to the point of no return. We learn how Leatherface’s appearance came to be, which somehow turns him from a normal teenager into a slow-minded and violent killer. We’re also seem to be told that even though young Leatherface seemed to have a sense of morality and ethics at times, his family would always get to him and make him evil. The nature vs nurture argument is fine. But to have a character drastically change so quickly and just become the Leatherface we now know, even though he didn’t show any of these tendencies in any scene prior to this happening, is just bad writing. It does a disservice to Leatherface and to the fans of the franchise. 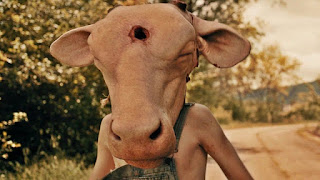 LEATHERFACE could have been a good prequel to a classic horror film. And while it’s well made and well acted - with some nice gore effects - the story doesn’t do the prequel justice. The character arc for Leatherface doesn’t feel natural and doesn’t fit with the character we would come to know. And the film seems to suffer from an identity crisis, wanting to be any other film besides THE TEXAS CHAINSAW MASSACRE. THE BEGINNING was a way better prequel for the character. LEATHERFACE just ends up being pointless and honestly shouldn’t have been made at all. Not the worst in the franchise, but nothing really memorable either. What a shame.