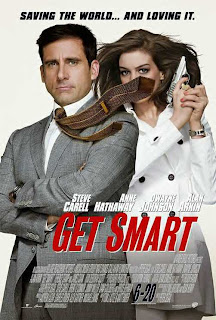 
PLOT - Based on the 1960s television show of the same name, GET SMART is about Maxwell Smart (Steve Carell), who is a top data analyst for a spy agency called CONTROL. Max wants to be a field agent but never gets the opportunity because he's just that good as an analyst. However that changes when some rival agency called KAOS attacks CONTROL headquarters and manages to get hold of a list of all the field agents in order to kill them all. The Chief (Alan Arkin) recruits Max as a field agent [since he's not known] and puts him together with Agent 99 (Anne Hathaway), who has a surgically altered face.  The two unlikely partners head to Russia to stop KAOS from carrying out its mission with nuclear weapons. But since the two partners are total opposites, hilarity ensues.
REVIEW

STORY - GET SMART is just another in a line of television shows turned into a film. Thankfully GET SMART leans towards THE ADDAMS FAMILY and THE FUGITIVE rather than BEWITCHED and THE AVENGERS (1998). However, it's one of those films that feels like "been there, done better". The script by Tom Astle and Matt Ember is decent but doesn't do anything that makes GET SMART stand out. One, it feels like a bunch of sketches put together to look like an overambitious plot that fails on both originality and a decent payoff. Two, the film was too long and pretty contrived through much of it. Should have been shorter. Three, was this an action film with humor or a comedy with action? I could never tell with this one and how to react to it. And then there's the fact that the AUSTIN POWERS trilogy have already spoofed this spy genre and a whole lot better too, making GET SMART seem weaker in comparison.

Besides that stuff though, the screenplay was feasible and funny at times. I liked the homages such as Agent 13 (played by Bill Murray) being in a tree, the shoe phone, and the stupid cone of silence. And surprisingly, there was a decent amount of character development, especially with Max and Agent 99, who probably had more depth than they deserved. The villains were kind of weak though and never felt like a threat to anyone. A decent screenplay on paper but felt kind of empty and soulless when translated to film.

DIRECTION - Peter Segal, who directed the remake of THE LONGEST YARD and ANGER MANAGEMENT, doesn't really do well in making GET SMART feel or look fresh. The pacing is off at times, as Segal doesn't seem sure if he should focus on action sequences or comedic bits to propel the running time. Besides, the action stuff isn't all that exciting anyway, though they're filmed nicely. I think the problem visually was that scenes just took way too long to get to the point, as if overbloating the point instead of making it simple and subtle for us to understand and laugh over. Less is more, dude. Listen to the cliche.

I will say the film does look really nice and the editing and other technical stuff were nicely done. But he needs to become an engaging director if he wants people to remember bits from his films. To be quite honest, I don't remember much about GET SMART now that I'm writing this. And the film came off more like a Steve Carell vehicle rather than a homage to GET SMART. Not a good sign.

VIOLENCE/SEX/LANGUAGE [aka THE GOOD STUFF] - The language was very tame. There is some sexuality involved but it's pretty tame as well. A lot of violence but nothing that will disturb anyone. Typical PG-13 action/comedy hybrid.

ACTING - The performances here were actually very good in GET SMART. Steve Carell is always fun and likable to watch. Watching him play Maxwell Smart is no exception. He tries to mimic Don Adams at times but also makes the character somewhat his own as well. Too bad the script really gave him dumb things to do. That airplane bathroom scene in particular...what the hell was that about? And why was it too long? Carell is a great comedic actor though and I liked him here, regardless of the material. He also had nice chemistry surprisingly with Anne Hathaway. She plays the Agent 99 thing a bit more seriously than Carell does Maxwell Smart but it balanced out their chemistry in their scenes. She's a great actress, no matter what film she's in. Hathaway also looked pretty hot in this film too. So that was a plus. Alan Arkin was pretty funny as The Chief, but doesn't get to do a whole lot until the end. Dwayne Johnson, a.k.a. The Rock, is pretty cool as Agent 23, although I felt he was underutilized in much of the film. It felt like he should have been a bigger deal for the story to completely work, but it never materialized for some reason. But Johnson does well due to his knack for comedy and his charisma. I felt the other actors were kind of a waste though, especially Terence Stamp as Siegfried. It felt like he didn't give a crap and just sleepwalked in every scene he was in. Maybe he read the script or something. And Dalip Singh, a.k.a. WWE's The Great Khali, was okay as well. Nice cast that needed better material.

MUSIC - We get the classic GET SMART theme song. We also get "Take A Chance On Me" by ABBA, "Ain't No Other Man" by Christina Aguilera, and even "4 Minutes" by Madonna, Justin Timberlake, and Timberland. Weird soundtrack really for a spy comedy, but I like the songs so I can't complain.

THE FINAL HOWL
GET SMART is nothing more than a popcorn film you'll want to rent on a Friday or Saturday Night. Other than that, it's not as smart or as funny as the AUSTIN POWERS films and the story seems to be suffering from schizophrenia. Plus it's too long and feels kind of empty when it comes to investing the audience into the film. But I laughed and it entertained me. So it wasn't all that bad. GET SMART "missed it by that much."
Posted by Fred [The Wolf] at 3:11 AM