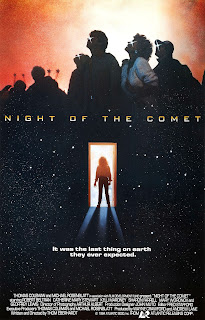 Directed By: Thom Eberhardt Starring: Catherine Mary Stewart, Kelli Maroney, Robert Baltran, Sharon Farrell, Mary Woronov, Geoffrey Lewis Genre: Horror/Science Fiction/Comedy/Zombies Running Time: 95 Minutes Score: 3 Howls Outta 4 (8 out of 10) Plot: Two girls from the Valley wake up to find that a passing comet has eradicated their world and left behind a mysterious red-dust and a pack of cannibal mutants. With the help of a friendly truck driver, the girls save the earth from a villainous “think tank,” karate chop their way through flesh-eating zombies, and, of course, find time to go to the mall.
Review: Thom Eberhardt’s cult flick NIGHT OF THE COMET is the post-apocalyptic sci-fi horror film for those nostalgic for arcade games, mall shopping and satire on Reaganism and consumerism. Inspired by multiple 50’s B-movies, THE OMEGA MAN and DAWN OF THE DEAD, this movie takes a dystopian world and infuses it with neon lights, new-wave and pop-rock and a rad vibe due to colorful characters who have a sarcastic view on their new reality. The film is boosted by fun lead performances from Catherine Mary Stewart [Regina] and Kelli Maroney [Samantha], who bring intelligence and toughness [Regina] or clueless, yet bubbly sass to lighten up the mood [Samantha]. It also helps NIGHT OF THE COMET having a good supporting cast as well, including future Star Trek: Voyager star Robert Baltran as love interest Hector and Mary Woronov playing a kind scientist who has to deal with colleagues who want to use any survivors as test subjects for their own survival. Eberhardt’s direction infuses a lot of mood and atmosphere through great cinematography by Arthur Albert, who captures the desolate isolation of an empty Los Angeles during Christmastime. The set locations, like the radio station and the mall are used really well and place NIGHT OF THE COMET during a certain era. From piles of dust due to curious people staring at a comet, to zombies who want to attack our survivors, Eberhardt shoots everything with a nice pace and a switching of tones that organically takes a serious topic and turns it into something lighthearted that makes the film’s message easier to swallow. I do wish the film had embraced its horror aspect more, as we barely deal with any zombies throughout much of the film. The film is more of a comedy than a horror movie anyway, but some tension would have been nice. I also think the film’s ending is a bit hokey and cheesy, only there to bring back an Easter egg from the opening moments of the movie. But other than that, NIGHT OF THE COMET is a good time if you’re looking for some light cinema that embraces its cheese. 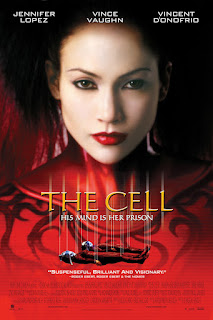 Directed By: Tarsem Singh Starring: Jennifer Lopez, Vincent D’Onofrio, Vince Vaughn, Catherine Sutherland, Dylan Baker, Marianne Jean-Baptiste, Jake Weber, Dean Morris Genre: Horror/Science Fiction/Thriller Running Time: 107 Minutes Score: 3 Howls Outta 4 (7 out of 10) Plot: A psychotherapist journeys inside a comatose serial killer in the hopes of saving his latest victim.
Review: An underrated sci-fi police procedural, 2000’s THE CELL would probably be forgotten about if it weren’t for the strength of the movie’s leads and the impressive visual presentation by director Tarsem Singh and cinematographer Paul Laufer. The visuals, especially, are what make THE CELL stand out from other contemporaries of the time like THE SILENCE OF THE LAMBS and SE7EN, resembling more films like 1984’s DREAMSCAPE or A NIGHTMARE ON ELM STREET flick. Each scene inside any of the leads’ minds looks like a music video, which is not surprising since Singh directed R.E.M.’s “Losing My Religion” [a scene in the film actually resembles one of the set pieces from that very video]. This is the work of a man who has let his imagination run wild, with so many stylish motifs inspired by famous art pieces. There’s fashion happening throughout the movie, with the actors given different looks to play off of. Even so, everything visually seems a bit off, with colors being both bright and muted at the same time, while figures in the background throw you off with strange poses and interesting visual aspects that don’t seem right to the human eye. It’s a stunning looking film with disturbing images, like a serial killer hovering over his victim via hooks through his naked back, or someone getting cut up to the point where their intestines are pulled out and played with. Even in 2022, I’m still impressed by this film’s strong direction. The cast seems game for all of it. In particular, Vincent D’Onofrio stands out as the film’s villain - getting to haunt our heroes while wearing strange outfits and headpieces, enjoying the moment to play a menacing presence for much of the movie. Even his quieter moments stand out, revealing a real person despite the evil that permeates through him. Jennifer Lopez is much more quiet and sympathetic as our heroine, allowing the looks she displays throughout to speak for her much louder than her dialogue. Vince Vaughn is good as the supporting FBI Agent who shares memorable moments with both lead actors. The only negative is really the pedestrian and predictable police procedural that plays out, mainly in the film’s final act. There’s nothing really special about it and plays out exactly as one would expect it to. There are no real twists and turns when it comes to the story, and the film never really explains how one can travel into someone’s mind all that elaborately. I guess the film needs this plot to drive the action forward, but it’s honestly the least memorable thing about THE CELL. Still, THE CELL is a film I feel that should be watched at least once, or revisited if you haven’t seen it in a while. It’s still a visually impressive work of art that shows that originality and creativity can go a long way in a feature film. 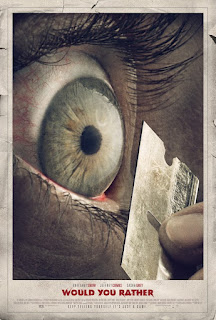 Directed By: David Guy Levy Starring: Brittany Snow, Jeffrey Combs, Jonny Coyne, Lawrence Gilliard Jr., Enver Gjokaj, Sasha Grey, John Heard, Robin Lord Taylor Genre: Thriller/Horror Running Time: 93 Minutes Score: 3 Howls Outta 4 (7 out of 10) Plot: Desperate to help her ailing brother, a young woman agrees to compete in a deadly game of “Would You Rather”, hosted by a sadistic aristocrat.
Review: I was expecting a lame rip-off of films of the “torture porn” era like SAW or HOSTEL. But WOULD YOU RATHER is surprisingly a tense little thriller with some decent-to-good performances and cringe-worthy moments due to director David Guy Levy letting one’s imagination create something more gruesome than what appears on screen [or lack thereof]. Following SAW’s footsteps in tackling the concept of playing with one’s ethics and morality when it comes to surviving a terrible situation - in this case, with an added incentive of the last person standing with a large sum of money - the film does a pretty good job mixing noble and kindhearted characters with those who take pleasure in hurting others like it’s some sort of sport. While not the most developed screenplay with dynamic characters, the storytelling does enough to give us a glimpse of the different personalities who are part of this devious game and why they choose to make the decisions they make as things get more desperate towards the end. The games played in WOULD YOU RATHER aren’t really visualized in a gruesome way like the “games” that are presented in the SAW films. But the ideas behind them are pretty twisted. Would you rather electrocute the person next to you, or yourself? Would you rather whip a person’s back until they bleed to death, or stab someone with an ice pick instead? Or maybe you’d like to submerge your head in a barrel of water for two minutes or take your chances with a mystery card? Director David Guy Levy does a nice job building tension and suspense over the character’s choices and their subsequent actions, whether good or bad. Despite not being a stylish movie, Levy allows the script and the actors to be the focal point. Considering the low budget, this is definitely a good move. The actors play their parts well. The standouts are Brittany Snow as a sympathetic player who is constantly in conflict with her morality due to wanting to save her sick brother and needing the money to pay their bills, Jeffrey Combs as a hammy upper class host who twirls his proverbial mustache any chance he gets, and Robin Lord Taylor as the snobby rich son who got his kicks watching people in need suffer. WOULD YOU RATHER is a bit of an underrated little horror flick that I wasn’t expecting to enjoy as much as I did. There’s nothing really special about it, but the actors are mostly fine and the tension and suspense created by the screenplay and direction are solid. I was caught up in what I was watching and the ending is a bit of a kick to the nuts. If you got 90 minutes to spare, this is not a bad film to fill that time.