In collaboration with a selection of the finest film blogs the infranet has to offer Lost Video Archive is proud to contribute this quality post to Blair Week, a six day extravaganza expounding on the virtues of Linda Blair and her legacy of quality motion pictures. Don't believe me? Just read on... 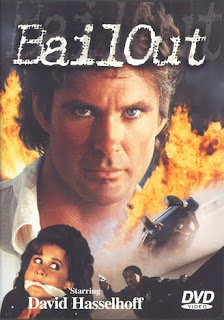 
Apparently, it's Linda Blair Week at the blogosphere [not sure if this is legit, but I'll go with it] and I was offered the privilege to contribute something for this special occasion. Seeing how I've already written reviews for THE EXORCIST, SAVAGE STREETS, and CHAINED HEAT, I'm no stranger to the legend of one Linda Blair. So I was excited about the prospect. Hey, maybe I could finally find time to review REPOSSESSED, one of my favorite spoofs?

Nope, someone already took it.

Okay, I'll do a film I haven't seen since I was a kid - HELL NIGHT.

Stolen from my grasp.

As I looked through the week's events, I noticed every Linda Blair film was getting a retrospective. Except for this one:

Oh God...
Look... I have finals and assignments coming up. I really don't want to review this piece of shit, so I'll make this review short and sweet.

THIS MOVIE SUCKS COCK IN HELL!

Let's look at the plot: White Bread (David Hasselhoff), Blue (Tony Brubaker), and Bean (Tom Rosales) are three bounty hunters who work for a shady bail bondsman who wants to make sure his "clients" go to court so he can get paid. They're hired to make sure an heiress (Linda Blair) makes it to her court date, which will make them a lot of money. However, she's kidnapped by Columbian drug dealers because they want the $5 million that her father (John Vernon) owes them. It's up to W.B., Blue, and the Bean to save her.

Reading the plot makes it sound like a good film. Unfortunately, you can only judge it AFTER watching it, causing you to lose 90 minutes of your life that you're better off spending to do something else. The script is terrible. There's no character development besides stereotyping everyone in the film. The most ridiculous one is Bean, who happens to be called that because he's a short Mexican. He also speaks with a stereotypical accent, tries to be funny with some stupid catchphrase [doesn't work], and he happens to have like eight kids - because, you know, he's Latino and Latinos have large families even if we struggle to support them. Obviously, White Bread is the leader and he's the one who gets the girls. And then we have Blue, who is actually black. I'm surprised that he wasn't called Sexual Chocolate or something like that, since he was the smooth talker. And of course, their boss was a greedy Jewish man. Gotta love racism! Let's not even talk about the dialogue, which is terrible. And the story progression was just atrocious. It felt like a bad TV movie that I wished I could just fast forward through.

Speaking of TV movies, the direction by Max Kleven made it look like one. In fact, I was surprised this was made in 1989 because it looked 10 years older than that. It was like watching a rerun on TV Land for Charlie's Angels or Starsky and Hutch. I don't know if it was the camera or the film they used, but the movie looks really dated. Kleven's work is pretty much a point-and-shoot affair. There's no real style that makes BAILOUT visually interesting. It's like a lost episode of The A-Team, where everyone shoots at each other but no one gets shot. That is until the end, where the heroes [made up of 5 people] manage to kill an army of 50 all by themselves with gunfire. And Hasselhoff blows up a helicopter with a grenade launcher. Heh. The action scenes are pretty cheesy.

The acting is no better. David Hasselhoff plays David Hasselhoff. If you've seen Knight Rider, Baywatch, or that cheeseburger video where he's wasted, you know what I mean. At least he has a sweet mullet. Linda Blair doesn't have much of a role as she's kidnapped TWICE and is pretty much tied up for most of the film. I will say that she seems game for anything here and actually makes her nothing role somewhat interesting to watch. She has no chemistry with Hasselhoff but she tries. And she knows how to shoot a mean gun. Tony Brubaker and Tom Rosales made the most of it as Blue and The Bean, even though Rosales tried to be the comic relief [he was neither a comic or a relief]. John Vernon did okay in his short role as Blair's father. He looked more tired than engaged. And Gregory Scott Cummins was the stereotypical Latino villain. Nothing more, nothing less.

- Blue was trying to teach a boxer the "rope-a-dope" technique, which led to him getting knocked out in the process. It felt like I was watching MILLION DOLLAR BABY, except there were a few hundred thousand dollars missing from the story.

- The Hoff couldn't believe someone had the nerve to call him a "fuckface". Ironically, that's what he did when he casted Pamela Anderson and Nicole Eggert for Baywatch!

- Linda Blair got kidnapped by a bunch of thugs. They must be from the Catholic Church. I knew that whole thing with the crucifix would get her into trouble.

- A warehouse had a speed limit of 10 MPH. I guess slow motion running isn't just for the beach.

- "May a bird of paradise make a cushy nest up your nose." I think that sort of thing is only possible for people like Triple H or Barbara Streisand.

- The thugs wanted to blow Linda Blair's brains out if The Hoff didn't leave them alone. They must have been horror fans. I knew that mindfuck known as EXORCIST II: THE HERETIC would get her into trouble.

- Linda Blair got kidnapped again as leverage for a negotiation. They must have been punks. I know making that guy bend over backwards to kiss his ass goodbye in SAVAGE STREETS would get her into trouble.

- Two Mexicans were shot by an army patrolling their borders. This new anti-immigration law in Arizona is really getting out of hand!

THE FINAL HOWL
BAILOUT is a waste of time, money, and energy. Definitely not Linda Blair's highest career moment, even though it probably did help Hasselhoff fund for a cheeseburger and some alcoholic beverages. Avoid. Avoid. Avoid. I'm sending this turd to the WTF? Vault, where bail will be remanded.