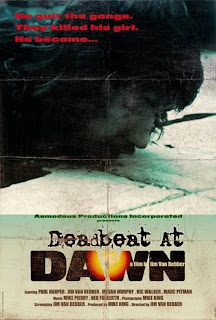 PLOT (from IMDB)
After one too many encounters with The Spiders, The Ravens’ leader’s (Jim Van Bebber) girlfriend (Megan Murphy) tells him to quit the gang or it’s Splitsville. He does so, but the leader of the Spiders (Paul Harper) is hellbent on revenge and arranges the murder of the girlfriend. That ticks off the boyfriend, who wreaks havoc with the two gangs, who have joined forces in order to pull off a security truck heist. 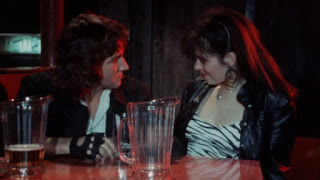 If you cross 1979’s THE WARRIORS and 1984’s COMBAT SHOCK, you’ll get 1988’s DEADBEAT AT DAWN - a low budget and ultra violent action-thriller that proves with just four years and $10,000 at his disposal, one man could make a gritty, grindhouse cult film that even over three decades later would still be talked about and admired. It’s gritty, violent and disturbing in all the right ways. When you can make THE WARRIORS feel tame, you’ve got something with your movie. DEADBEAT AT DAWN isn’t a complicated film, nor should it be. It’s your standard revenge film, where the protagonist loses a loved one due to a rival and just wants vengeance against this individual. It’s DEATH WISH, but more romantically punk and rough around the edges.

What makes the simple story work are the major players that get most of the focus. It helps that DEADBEAT AT DAWN revolves around Goose, the leader of The Ravens who goes through a lot within 80 minutes. While a bit of a prick at first, we soon see how much he loves his girlfriend Kristy. So much so, he’s willing to step down as leader and leave The Ravens [which doesn’t settle well with the rest of the gang]. Even though he’ll sell drugs and steal to make ends meet for him and his girl, Goose comes across as caring and romantic in an unorthodox way that makes him likable and charming in his own unique way. Unfortunately, his life crumbles when Kristy is murdered, leading him down a path of drinking, doing drugs, and even dealing with a greedy drug addict for a father who is still suffering PTSD from his time in Vietnam. But when he’s forced back into gang life, he decides to finally take control of his own destiny by getting revenge on everyone who’s wronged him. Most 2 hour films barely have any character arcs that are as detailed as Goose’s in DEADBEAT AT DAWN. The man completely changes from the start of the film right to the film’s very bloody end. I’ll discuss Jim Van Bebber’s performance in a bit, but he really gives Goose life and makes us care for him to the point that no matter how he has to do it, you want him to get revenge on these bastards who took away everything that meant something to him. That’s the quality of an interesting, well-written (enough) character. 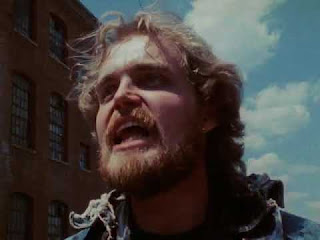 The other major characters are memorable as well. Goose’s girlfriend, Kristy, is obviously the inciting incident that sets everything to its downward spiral. But she’s an interesting love interest as she dabbles in witchcraft, meaning as a means to protect her boyfriend from getting hurt, or even killed. She’ll talk to fortune tellers, play with Ouija boards, and even create magical amulets for Goose to wear as protection even if it will cost her hers. She doesn’t have a whole lot of depth, as she’s the typical girlfriend character, but these other elements give her enough to stand out. On the other side of the spectrum, we have Danny - the leader of the Spiders. Talk about a character we were born to love to hate. Not really sure what his deal with Goose is, but it’s probably due to Goose defeating him in every fight and pretty much owning his turf. When he ends up ordering for Goose’s death but gets Kristy’s instead, he uses it to his advantage to get one up on his rival. It also doesn’t help that Danny is an abusive creep, beating up his loving girlfriend - in one case, punching her when she declares her love for him. What a stand up guy you want taken care of by the end of this film. His sidekick, Bonecrusher, is no better. The guy is a psychopath who enjoys hurting others and proudly using it to get a reaction out of others. Bonecrusher probably has the best dialogue in the film and it’s no surprise why he’s considered a cult fave. The dude is nuts. Another person of note is Keith, who was Goose’s second-in-command but turned leader when Goose leaves The Ravens. His disapproval of Goose’s quitting turns him into a creep, becoming power-hungry and even working with his enemies just to get a quick payday. While we don’t know their life stories or anything deep like that, the supporting characters fit their archetypes well and help create a bleak atmosphere that makes the actions of these characters tolerable and understanding to watch unfold.

If there was any flaw with the script, it would be that sometimes the film has exposition or moments where characters talk about something that doesn’t really contribute a whole lot to their characters or the plot. A lot of exploitation films do this to compensate for a lack of a major budget and/or to beef up the run time. It doesn’t detract much from DEADBEAT AT DAWN, but you can tell when the film is trying to fill up time before the next major incident happens. I also would have liked a bigger backstory about the rivalry between Goose and Danny, but again doesn’t really hurt the film since Danny makes things really personal within the present story. 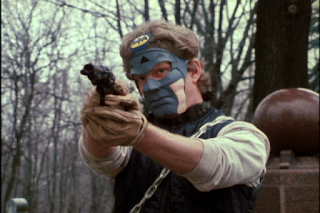 The direction by Jim Van Bebber [who also wrote, produced, and even plays main character Goose] is pretty good, considering Bebber didn’t have a ton of resources to use while filming. Shooting around Dayton, Ohio provides a ton of gritty atmosphere, as the location looks like a place no one would want to live in and would shape people into violent and heartless folks. I’m surprised that Dayton looked really dirty and bleak back in the late-80s. You’d think it was pre-90s New York City or something. The editing and sound design at times can be a bit rough, but it sort of brings a certain level of charm to the film. I did think the fight sequences looked and felt as realistic as possible, despite a lack of polish choreography. There are some cool gore effects, including a hand being shot off, fingers bitten off, throats being pulled apart, and even decapitations. Plus, Bebber is awesome with a pair of nunchucks, kicking major butt with them. The film also has a nice flow and moves pretty quickly for its 80 minutes. It looks and feels like an exploitation film made for grindhouse theaters, which is probably why DEADBEAT AT DAWN works better than it should. The most interesting thing about the film is that while bleak and sort of depressing in terms of its premise, the execution plays out as this over-the-top fun time in terms of its violence and oddball characters. Bebber had a clear vision and did a great job visualizing it on film.

The acting isn’t the greatest out there, but it works for DEADBEAT AT DAWN. Paul Harper plays a really hatable villain in Danny, a role I’m sure Harper had a lot of fun to play. Marc Pitman is even better as Bonecrusher, portraying a nut job with gutso, enjoying himself while quoting the film’s most memorable lines. Megan Murphy and Ric Walker are good in their respective roles. But the real star is Jim Van Bebber as Goose. The man is captivating on film, portraying a man with so many layers, it’s hard not to care and root for the guy. He’s a force on screen, peeling every layer out of Goose from start to finish. From happiness, to grief and to angrily vengeful, Van Bebber creates a fleshed out human being that we wish deserved a better run at life than he actually does. The man also did his own stunts and can wield a wicked pair of nunchucks like nobody’s business. DEADBEAT AT DAWN exists because of this man and he makes the most out of everything. Nothing but respect and appreciation for his performance and his behind-the-scenes work.

DEADBEAT AT DAWN eluded me for decades, but I’m glad I finally got to catch up with this awesome exploitation film. Gritty and violently fun, it’s a film that won’t win any awards but will keep your interest at how well done it is considering it is super low-budget. You have a revenge story you can understand, over-the-top gore that will either shock or impress you, and a strong performance by jack-of-all-trades Jim Van Bebber that more than keeps the film afloat for its short runtime. Fans of ultra-violent exploitation action films should get a kick out of this one if they haven’t already.