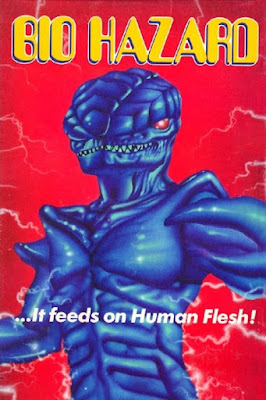 A group of skeptical government officials headed by General Randolph are brought to a remote laboratory for a demonstration in “Psychic Materialization”, a successful side effect of an experimental drug. But the project scientists had warned that not enough testing had been completed to assess safety concerns. In a freak accident during the demonstration to the politicians, a vicious creature is created! Unable to contain the monster, it unleashes unbelievable havoc & destruction against mankind! Reproducing itself at an alarming rate, and all known weapons seemingly powerless against the creature, the scientists are gravely concerned for the survival of mankind! 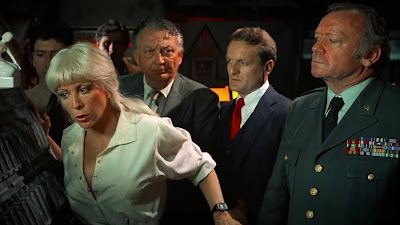 BIOHAZARD is a B-movie that I wanted to like more than I did, considering the film’s promotional art with that cool looking alien creature. But a bare bones plot with uninteresting characters, trying to stop a 4-foot alien monster as they drive around, make out and recite bad dialogue brings this film down for me. Despite its generic plot ripping off sci-fi movies like 1979’s ALIEN and 1982’s E.T.: THE EXTRA TERRESTRIAL, there’s not much in the way of story to dissect in BIOHAZARD. Also, actress Angelique Pettyjohn [who plays one of the more unconvincing psychics in a film] looked so much like Lady Gaga, that I wanted to watch A STAR IS BORN or HOUSE OF GUCCI instead. But at least the film is short, the alien outfit is better than one would expect with a low budget flick, the gore make-up is actually impressive and the film looks great considering its budget. And seriously, how many films do you know have a 7-year-old child masquerading as an alien creature as he mauls people in the neighborhood and rip up posters of E.T.? Plus, that jarring ending and a blooper reel that proves the best of the bad acting was in the actual film! Not so terrible that it lives up to its title, but BIOHAZARD is pretty average and doesn’t warrant much of a recommendation unless you watch with some buddies under the influence of booze or other substances. You could do a lot worse, I guess.