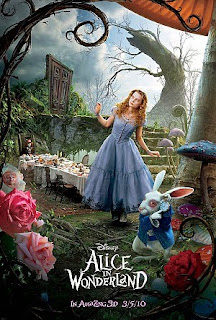 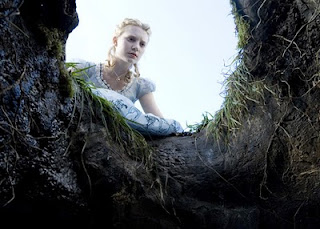 h the Looking Glass, and What Alice Found There, 19-year-old Alice Kingsleigh (Mia Wasikowska) is forced to go to some society function where she's been set up for the Lord's son, the stuffy Hamish (Leo Bill), to propose to her. With all the attention on her, which adds to her confusion, Alice runs away. She follows the White Rabbit (voiced by Michael Sheen), falling down a rabbit hole while chasing after it.

Alice is transported to a fantastical land inhabited by strange looking creatures and people, including talking animals and dangerous playing cards. The inhabits are unsure whether they retrieved the real Alice Kingsleigh, as Alice has no recollection of her past adventure in Underland [not Wonderland as it's incorrectly called]. Only The Mad Hatter (Johnny Depp) believes her to be the real Alice, seeing her as the only hope for the salvation of their land.

Apparently The Red Queen (Helena Bonham Carter) controls Underland under a tyranny, where she uses the Jabberwocky (voiced by Christopher Lee) to keep her reign as it destroys all threats to her power. A scroll foretells that Alice will slay the Jabberwocky, which in turn will hand The Red Queen's power over to her good sister, The White Queen (Anne Hathaway). Knowing this, The Red Queen orders her knight, Knave of Hearts (Crispin Glover), to find Alice and kill her before Alice finds the Vorpal Sword and makes the prophecy comes true. 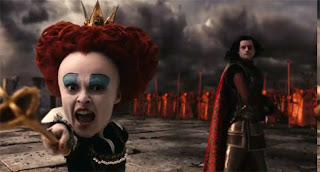 hould look like a fantasy come to life, and that's exactly what this Disney sequel does extremely well. All the characters look distinct and the CGI looks cartoony, but in a good way since this is really meant for children. I also liked how dark the look was as well, as it truly depicted the Red Queen's reign over Underland, while not being so scary that it'll frighten children. The costumes are great as well, as the characters from the novel look exactly how you'd imagine they'd look. It looks like a Tim Burton film and I think the live-action stuff mixed with the green screen and CGI gave the film a magical feel this story deserves.

- Tim Burton's direction. This one is more hit than miss, in my opinion. While I do miss the Tim Burton of old [pre-PLANET OF THE APES], I do think his direction here isn't all that bad. While there are some pacing issues because this film is probably longer than it needs to be, the visuals are quite stunning and the editing is top notch. The action scenes have some nice tension and excitement to them, which is a definite plus. While I miss his more original, darker stuff, I still admire Burton quite a great deal and will watch anything attached with his name. He's almost becoming a parody of himself at this point though. I hope DARK SHADOWS gives us more of the Burton of old.

- Mia Wasikowska and Helena Bonham Carter. Both actresses are really good in ALICE IN WONDERLAND. Waikowska is quite fetching in the role of Alice, giving the character a quiet vulnerability while maintaining a hidden strength that showcases her independence and fight for what's right. I would like to see her in more films. Carter, for me, was probably the best actor in the film. She just steals the show in every scene she's in, enjoying being a total bitch with a huge head. I dug it.

- The story. Now I don't think Linda Woolverton's screenplay was terrible. But it definitely was lacking in many areas. For 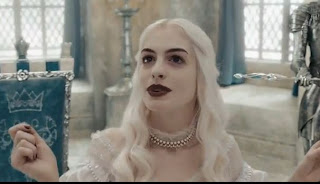 one, it was hard at times to decipher whether ALICE IN WONDERLAND was a true sequel or a reboot of sorts. Some scenes play out just as they in the novels, even though we're led to believe that Alice has already gone through these trials when she was younger. Also, the tone of the film was inconsistent. Was this a fantasy film? Was this an action film? A science-fiction film? It was like watching THE CHRONICLES OF NARNIA, THE WIZARD OF OZ, and HOOK all in one film. THE CHRONICLES OF NARNIA feel came from the adventure portion of the narrative. The evil Red Queen and the good White Queen remind me of the two Witches in THE WIZARD OF OZ. Hell, the Red Queen even had simian servants! And HOOK is obviously due to Alice's age and her return to Underland so she can remember her past there and save the day.

Speaking of Alice's arc, that too was a bit conflicted. For much of the film, she's too wrapped up in what she believes is dreaming that she's in Underland. While I get it as a plot device, it becomes frustrating towards the end when her arc is really about something deeper - becoming an independent woman who can handle herself and doesn't need a man to sustain her. I also thought the ending was a bit much, especially when it sort of seemed like it was supporting imperialism. Really? Is that what ALICE IN WONDERLAND is really about? Coming into an unknown world and becoming some sort of hero in order to take it over? Wow. I just wish the film had more depth to it, that's all.

- Johnny Depp. I really hate putting Depp in a MISS category. I'm a huge fan of the actor ever since the 1980s. But his portrayal of The Mad Hatter isn't really that great. It's just okay. For the biggest name actor in the film and the most promoted, his performance was pretty lackluster. He just seems to be going through the motions here, not being mad enough to really be an interesting character other than Alice's somewhat conscience. He looks like Carrot Top with a top hat and bad make-up. I know Burton and Depp are a package deal these days, but I think this could have been one occasion where Depp took a break and someone more interesting could have played the Mad Hatter role. Depp is a great character actor, but he did nothing for me in this film.

- Anne Hathaway. Just an annoying performance as The White Queen. I get that she was the opposite of the Red Queen, but she had no depth to her at all. Hathaway is a good actress too, but this wasn't a good role for her.

- The Futterwacken Dance. I did not need to know or see what it was. 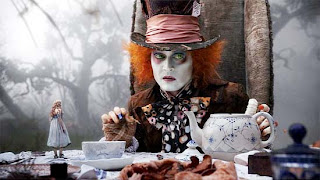 1 billion-plus worldwide box office], ALICE IN WONDERLAND may be one of Tim Burton's and Johnny Depp's least interesting and satisfying films. As long as these two have been around, you'd expect more out of each of them at this point. It's a beautiful looking film and the two lead actresses carry it quite well. But it's not engaging enough as a story and it'll just make you dust off your Lewis Carroll stories and re-read them again instead. ALICE IN WONDERLAND is a film I can either leave or take with not much care. Let's hope the next Depp-Burton collaboration is a lot more interesting.