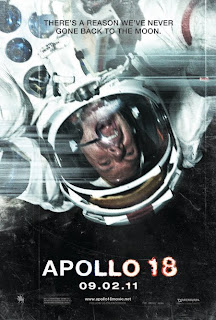 
PLOT
It's 2011 and some website discovers and airs some footage that details the exploration of Apollo 18, which the Government has erased from all memory and denies to have ever existed - claiming that Apollo 17's mission to the Moon was the last one recorded. However this new footage proves different, as it shows three astronauts (Warren Christie, Lloyd Owen, Ryan Robbins) on the non-existent Apollo 18 on a top-secret mission commissioned by the Department

of Defense. While one astronaut circles the orbit to keep track of the shuttle from above, the other two astronauts decide to investigate the moon and collect samples for research.During their investigation, they discover a Russian Moon Capsule abandoned nearby, knowing that something must have happened to any of the cosmonauts involved - even finding one of the bodies on the Moon's surface nearby. Nathan Walker (Lloyd Owen) finds moon rocks, but is attacked by one of them. Complaining that something is now inside his spacesuit - in fact infecting his body period - Nathan's behavior begins to change as he becomes sick by the invasion. As Nathan begins to lose it, his teammate Ben Anderson (Warren Christie) realizes that whatever was inside of the rock is using Nathan as a host body, meaning trouble for the three unsuspecting astronauts.

HITS
- The actors. I will discuss why APOLLO 18 was a hard sit through at the start of the film and why I was almost tempted not to finish watching this movie at all. If it wasn't for the solid acting in this found footage horror/sci-fi flick, I would have given up on it after a half hour. But Warren Christie, Lloyd Owen, and Ryan Robbins carry the movie extremely well, as I believed every one of them during their terror. Not only did all three look like they were from the 1970s, but I believed each one reacted to the same situation in very different and subtle ways that gave their one-note characters a ton of personality and dimension. I especially 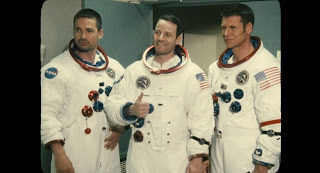 enjoyed Lloyd Owen's performance, who went from 'all-American astronaut' to paranoid and vicious infected victim quite convincingly. Warren Christie, who had to play off of him, was great as well as the sympathetic lead. I really thought these men did an incredible job taking a weak script and making it worth watching. If not for these gentlemen, I wouldn't have watched the entire film at all to see it actually get better as it went on.

- The special effects and make-up. While there's not much of it here, I thought the SFX was really cool. The moon rocks, which obviously hold a dark secret, were convincing in their visuals and never looked cartoon-ish or fake. I also liked the infection make-up used on Lloyd Owen when he becomes the creature that's infected him. Simple, but effective. I dug it.

- The visual style. I thought the look of APOLLO 18 was pretty authentic and helped me keep watching the film as a whole. The cameras inside the shuttle were dead-on similar looking to real life shuttle footage. The grainy footage outside the shuttle gave the film a sort of documentary, gritty look that I liked. Plus the sets were fantastic. The interior of the shuttle looked legit. And it created a nice sense of claustrophobia and tension that really elevated the film. And I know the moon setting was a movie set, but damn if it didn't look real. I thought the film looked great, so kudos to director Gonzalo Lopez-Gallego for that.

- The last two acts of the movie. I'll get to the first act in a bit. But APOLLO 18 doesn't really pick up the pace and the mood until the second act, where the astronauts locate the Russian shuttle and the dead cosmonauts. After that, the pace is very quick and the atmosphere is very tense and suspenseful. We see the villains of the film, we watch the characters freak out and try to figure out what to do, and then we see them realize that they were sent on a suicide mission by their government who they had trusted their lives and careers to. There's less scenes of just two people talking, and more scenes of two people being active and trying to get themselves out of a dire situation in vain. I also loved the conspiracy angle concerning the Government as well. I felt as the film reached its conclusion, it came off as very effective and pretty messed up [but in a good way]. Like I said, I was about to give up on APOLLO 18 after its first half hour. But once the film picks up, you can't help but watch and see how it all ends up. I literally stopped trying to distract myself with other things once the shit had hit the fan, watching the movie with great interest and actually enjoying it. If only the film had actually started and ended that strongly.


MISSES
- The first act. Now I can appreciate a slow build to the action, terror, and suspense in any film. As a matter of fact, most films like APOLLO 18 should do that to suck viewers in ri 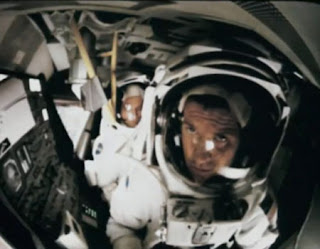 ght from the start and give them a bit of development for the characters and the situation they're in, or about to get into. Unfortunately, APOLLO 18's set up just takes way too much time. In fact, it's a really slow paced portion of the film that left me bored and wondering why I bothered to watch it. In fact, when the film was in theaters, audience members actually walked out during this act because of the massively slow set up for future events. There's not enough time with the characters so they can be developed all that much besides their name and title. There's also a ton of conversation during this portion, and not enough action. I don't mind dialogue heavy scenes, but I usually expect these scenes in the second act, not right at the beginning. It may be too much, or too little, for many out there. If it wasn't for the acting, APOLLO 18 would have lost me. I respect and appreciate a slow burn, but this one was way too slow.

- The antagonist. I don't think the villain(s) of the story are terrible. I just wanted the antagonist to be something more major than it actually was. Even though the appearance of the villain does help the film and increase the pace, I was really expecting something more major and edgier. I also think we get to see the villain right away the moment it appears, instead of cutting away from it like it does afterwards until the very end. This is more of a personal issue for me rather than something that hurts the film, but I thought the villain could have been more threatening. Still, what was done with the antagonist was done well.

- The ending. Again, I didn't hate the ending. It was just 'there' for me. I guess after watching [REC] again recently, I was expecting an ending that grabs you by the balls and makes sure you remember what great it ended. Instead, it ends pretty predictably. Other found footage films like PARANORMAL ACTIVITY and THE BLAIR WITCH PROJECT had very memorable conclusions that end up being highlights to their respective movies. APOLLO 18 pretty much ends exactly as you would expect it to really. It's not a horrible ending, but compared to how tense and suspenseful the film is during the climax, it's kind of a letdown. I did dig the info during the epilogue of the film, proving that the worst villains were probably the ones on Earth rather than on the Moon.


THE FINAL HOWL
APOLLO 18 is a film I don't understand

all the dislike and hate for. Yes, it's a tough sit through during its first act. Yes, it won't blow everyone away in terms of quality. But for what it is and what it does, I was pleasantly surprised that it wasn't as bad as I heard it was. I thought the acting was the saving grace of the movie, while some of the camera work and special effects were actually quite nice. Sure there's a pacing issue, but once it picks up, it's a cool ride. If you like found footage flicks, you could do worse than APOLLO 18. Just be patient and you'll see there's a decent little film in midst of its predictably and slow pacing.