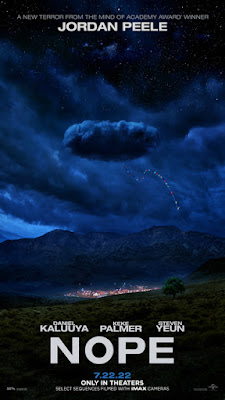 Residents in a lonely gulch of inland California bear witness to an uncanny, chilling discovery.

2022’s NOPE is Jordan Peele’s third directorial film in the horror genre, following the massive success of 2017’s GET OUT and the quieter success of 2019’s US. Unlike the more social and political commentaries of those two films, NOPE is less focused on that and more interested in a truthful look on the Hollywood industry and how people are changed because of it. Because of that, NOPE feels less like a horror film [even though aspects are there] and more like a Quentin Tarantino western-drama with aliens terrorizing a small California town. While audiences expecting more of what Peele had presented previously in his films might be disappointed, I like that NOPE stands out as something different from the rest of his filmography.

This will be a fairly spoiler-free review since the less you know about NOPE will benefit one’s viewing experience. But I thought the narrative was pretty great for the most part, with some wonderful dialogue and narrative beats that actually captured your interest. The Haywood siblings, OJ [who gets mocked for his initials by caucasian members of the Hollywood industry for obvious reasons] and Emerald are victims of an industry that uses them and spits them out. After their father is mysteriously taken away from them, the siblings struggle with making ends meet by being horse handlers for television and film. OJ is the quieter one, focused on business and feeling like he’s being judged by others in the industry for social and political reasons. OJ is still grappling with what happened to his father and wants answers. Emerald has a more outgoing personality, less interested in the animal handling of the industry and more interested in selling herself to anyone with power for a job in front of the camera. She’s a singer, dancer, actress and whatever else because she feels like she’s a star that refuses to be seen and respected for various reasons. The siblings bicker over their differences in how they approach Hollywood, but come together when strange things happen around them.

Other characters deal with the Hollywood industry in other ways. Ricky “Jupe” Park is a former sitcom child actor dealing with a massive trauma that had happened on the set of his show years ago. He runs a carnival as a way to get control over what happened to him, laughing away parodies and constant gossip about his past as a defense mechanism. Antlers Holst is a Hollywood cinematographer who doesn’t feel respected enough in the industry, wanting to capture something truly out there to make a name for himself. And while not part of the industry, retail worker Angel Torres gets caught up with the strange happenings that goes on because he wants something exciting in his life for a change. 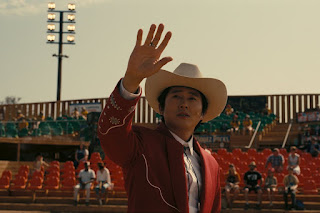 The main horror aspect is the obvious UFO narrative that drives most of the film. While there are creepy moments and random jump scares at times, the film mostly plays it like a Steven Spielberg action/drama/comedy more focused on how the characters react and deal with the situation rather than the aliens terrorizing them [even though they do]. There’s probably not enough alien invasion action for some viewers, but NOPE would rather focus on the human elements of the situation rather than gore, terror and special effects. It brings characters together, giving audiences some nice bits of dialogue and interactions that are entertaining. It also reveals the true colors of other characters, which may or may not reap rewards their way. But if you’re expecting a MARS ATTACK kind of movie, this isn’t it.

What brings down the film for me are several things in terms of the screenplay. One, certain characters don’t get enough screen time to gain any depth. Certain characters at the end who played a key role didn’t really engage me because I barely knew anything about them. Two, some of the comedy takes one out of the terrifying situation. Where one should feel tense and creeped out a bit, these moments are drowned out by funny dialogue or jokes that destroy whatever horror Peele was going for.

And the main downer involved a pretty important character’s backstory that was so interesting, I wanted to see how it would all play out in current time. Unfortunately, the characters involved exit the film before the film’s final act, making this subplot questionable. It wasn’t until I left the theater that I realized that this subplot had no real resolution, making me wonder why even bother adding it to the film. It’s almost as if Peele was more focused on the UFO stuff and decided to just end this subplot earlier than one would expect. It’s too bad because I found this particular narrative element super engaging and nothing really came of it. Very disappointing. 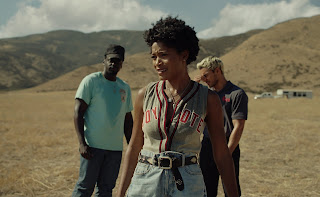 As for the direction, Jordan Peele does a solid job with NOPE. The film is split into many chapters, but it never really ruins the flow or pacing of the movie. The special effects are handled well and the action moments are strongly presented.  And some of the jump scares worked on me, so nice job there. The real winner is the cinematography by Christopher Nolan collaborator, Hoyte van Hoytema. NOPE is a gorgeous looking movie, especially on an IMAX screen. Hoytema uses the locations and the vast, empty spaces of the Haywood ranch to their fullest potential, creating a visual arena where anything can happen. Do I think it’s Peele’s most exciting work as a director? Nope, pun intended. But it's solid visual masterwork by a confident filmmaker who knows what type of films he wants to make. And I have respect for anyone who could make Corey Hart’s “Sunglasses at Night” into a dark, nightmarish song during certain moments of the film.

The actors all do a great job. Daniel Kaluuya brings a quiet, stoic confidence as OJ Haywood. He’s your typical western hero, focused on the task at hand in order to save the day and answer the questions that have been haunting him. Steven Yeun is very good as Ricky “Jupe” Park, hiding the character’s trauma through smiles and confident body language, while showing vulnerability whenever the past begins to haunt him again. Brandon Perea brings some comic relief as Angel, bringing some levity and having nice rapport with Kaluuya and Keke Palmer. Michael Wincott brings a quiet intensity to Antlers Holst. But the show stealer is, without a doubt, Keke Palmer as Emerald Haywood. Palmer seems to be having a blast throughout, reciting the best dialogue, performing in the film’s best sequences, and just showing everyone how charismatic and talented she is. It’s about time she got some recognition for her talents because she’s a star. 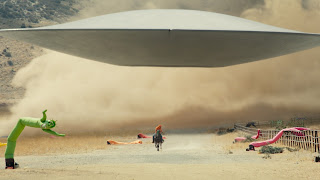 While not as good as 2017’s GET OUT, I found Jordan Peele’s NOPE to be slightly better than his previous film, US, due to the mostly successful handling of the movie’s ambition and scope. Less of a horror film and more of a sci-fi western, NOPE is a film about Hollywood and its troubling history when it comes to child actors and people of color. It’s a film that focuses on myths and gossip about the existence of UFOs. It’s a film that deals with how trauma changes people for better or for worse. There’s a strong narrative that’s sometimes hindered by a level of routine that could be seen as meandering at times, lack of depth for certain characters, and expendable subplots that make you feel cheated when they’re interestingly built up but not resolved in a satisfying way. But the direction, and especially the beautiful cinematography by frequent Christopher Nolan collaborator Hoyte van Hoytema, are solid. At times, Peele captures the anxiety and terror of the UFO situation that threatens the main characters in believable ways. And the acting is solid as expected, with a star stealing performance by Keke Palmer who outshines everyone around her due to her charisma and handling of funny dialogue that makes her a delight to watch. NOPE doesn’t totally come together as it should due to Peele sacrificing some of the stronger narrative beats to focus on the monster movie aspect of the story. But it’s a fun time, especially in theaters, and continues Peele’s streak in keeping me invested in what he has planned next for the horror genre.