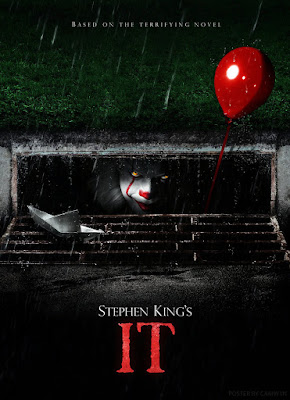 PLOT (from IMDB): In the town of Derry, Maine, the local kids are disappearing one by one, leaving behind bloody remains. In a place known as ‘The Barrens’, a group of seven kids (Jaeden Lieberher, Jeremy Ray Taylor, Sophia Lillis, Finn Wolfhard, Wyatt Oleff, Chosen Jacobs, Jack Dylan Grazer) are united by their horrifying and strange encounters with an evil clown (Bill Skarsgard) and their determination to kill it. 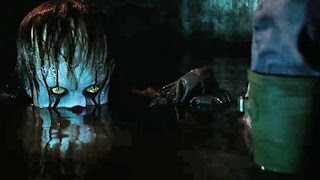 With a record-breaking box office this weekend worldwide for an R-rated horror film, 2017’s version of the Stephen King adaptation IT has taken everyone by storm. Clowns are upset, people with coulrophobia are soiling themselves, and horror fans are extremely happy that a horror film has saved the box office after a dry Summer season. IT was a film that was heavily hyped and debated about by fans of the novel, and by those who had fond memories of the 1990 television miniseries that brought us a memorable Tim Curry as Pennywise the Clown, creeping many of us as children and pre-teens. There were people that said the new adaptation would suck. There were some that believed that the source material would never translate well on screen in any format.  There were people who were displeased with the casting and the look of the modern Pennywise, feeling the film was going to fail the moment it was screened. And to all those naysayers, you were dead wrong about this one. IT not only surpasses the previous adaptation, but it manages to be a really good time too.

While 2017’s IT is a great film, I didn’t think it was perfect. I did have small issues with the movie, but it didn’t take away from my enjoyment of it. I thought some of the CGI, especially in the final act, wasn’t the greatest. I know CGI is something us modern audiences must get used to in order to watch supernatural events happen on film. But there were certain times where Pennywise looked like a cartoon and it took away a bit from the scene. It’s not as bad as some of the CGI as in Andy Muschietti’s underrated 2013 horror film MAMA, but it’s evident. I also felt that some of the characters didn’t get as developed as others. I think Mike got a bit of the short straw, especially when a lot of his character was given to Ben [the history of Derry’s tragic events]. It’s hard to give everyone a strong arc in a 2-hour film, but there were times where Mike just felt like he was “there” rather than really feeling as if he was part of the Losers Club. And probably the biggest flaw of the film: it wasn’t that scary. I’ve never been scared of clowns, so Pennywise made me laugh more than anything. And jump scares don’t do much for me 99 percent of the time, and didn’t do much for the audience that I was sitting with [none of them screamed or reacted to these moments]. I found IT enjoyable as a well-written adaptation of one of Stephen King’s better novels rather than feeling any sort of fear of what I was watching.

That being said, IT is a pretty great adaptation of the novel’s first half. The dialogue is strong. The characters are interesting. And it had a nice flow from Pennywise terrorizing poor Georgie, to the Losers Club finally confronting Pennywise for all the trouble he’s caused Derry. For me, IT is more than just Pennywise the Clown haunting kids and using their fear to feed his hunger. I’ve seen some complaints online with people wanting more Pennywise and wishing he was funnier, not understanding that the story is not even about Pennywise really. He’s just a plot device to give deeper meaning to what the child characters are experiencing in their lives.

IT is really about the struggles of growing up in a tough world. We’ve all experienced adults not really understanding our feelings towards certain things. Bill loses his younger brother and his parents treat him like a nuisance they don’t want to deal with, taking out their grief on him when he only wants their love and support as he personally feels guilty about it. Beverly deals with rumors of promiscuity while being sexual abused by her father. Ben is bullied for being overweight, while pining for Beverly - who in turn has eyes for Bill. Mike is bullied for his skin color, while still haunted by the death of his parents. Richie cracks jokes to hide his insecurities. Stan struggles with his identity. Eddie deals with his hypochondria, due to his mother who has passed on Munchausen syndrome to him. Even psychotic bully Henry is somewhat sympathetic, as he has a hard ass police father who bullies him. You can understand where his anger comes from, even if he is an evil prick. The kids all have issues we can relate to, since we were all their age once. Pennywise feeds on their insecurities, eventually making them stronger [or weaker] in the process. Unlike the TV adaptation, which has a very good first half in its own right, this version gets what the novel is really about in terms of its subtext, its tone, and how it portrays its characters.

Funny how IT is a better A NIGHTMARE ON ELM STREET film than the last few sequels and that stupid remake. I guess it can be done!

As for Pennywise, I loved how he was used in this film. I was worried he’d be overexposed as the film’s visual antagonist, but he only appears when necessary. He’s less funny than the previous adaptation, but way more vicious and sinister. If I were afraid of clowns, he’d be the one I’d be worried about instead of Tim Curry’s wonderful interpretation. Pennywise is no joke in this film.

The characters wouldn’t work without some great actors playing them. The child actors are absolutely fantastic, really bringing a genuine bond and chemistry between them all that reminded me of THE GOONIES and/or STAND BY ME. Jaeden Lieberher did a great job carrying the film as Bill, the leader of the Losers Club. I felt his guilt and grief over the loss of his brother, denying himself that Georgie was dead when he knew what the truth was. He captured that childlike innocence that we never want to lose as we grow up. Sophia Lillis was a standout as Beverly, capturing a lot of depth for someone so young. She played off of so many actors, yet shared a different dynamic with each of them, fleshing out a tragic character looking for that light at the end of the tunnel. Lillis is one to watch out for. Stranger Things’ Finn Wolfhard was great as Richie, providing the film with the comic relief. His dialogue is the absolute best and he was the one I most connected to. Hey, I had a foul mouth too when I was younger and had no shame about it. Fuck off. And Bill Skarsgard blew me away as Pennywise. I was really unsure about his casting at first, but he brought the devious and sinister nature of the character that Stephen King envisioned in his novel. Tim Curry will always be Pennywise to many of us, as 1990’s IT is one of his best performances. But 2017’s IT needed a darker version of the character - a Heath Ledger to Curry’s Jack Nicholson, I guess you can say. It totally worked and I look forward to seeing Skarsgard again in the second part.

Andy Muschietti’s direction is really inspired. I enjoyed his visual eye for MAMA years ago, praising his work on that film. But IT is a much better playground for him, as he’s able to conjure up some memorable imagery that many of us are still taking about days later. The fear sequences are really tense and suspenseful, especially inside of the Neibolt House during the last half of the film. I liked that the film looked it could have been made in the late 1980s, from the fashion, to the technology, and to pop culture easter eggs splattered throughout. I loved the direction during the projector scene where Pennywise figures out what the Losers Club is planning for him. I also dig that each location for the characters look different and look lived in already. I had issues with some CGI, but others really worked and helped the film pop visually. It’s a really beautiful film from a director who knew what kind of film he wanted to make here. And I got to say - the gore in a film starring children really surprised me. I won’t spoil things if you haven’t watched, but no child is safe right from the opening sequence. It’s unfair to compare it to the 1990s version, since that film was restricted due to television rights and FCC guidelines. 2017’s IT just proves that this story deserved an R-rated treatment on the big screen to highlight the nightmare feel of the novel.

And 2017 has had some great soundtracks. The New Kids on the Block gag was really funny, but hearing Anvil. The Cult, XTC, and Anthrax during key moments that enhanced the scenes was really cool. I’ve been really digging the use of popular music in movies lately, and IT was no exception. It captured the time frame and the characters within the story perfectly.

IT really surprised me. I was expecting it to be better than the 1990 adaptation, but I did not expect the film to be this good. I’m actually worried the second part won’t live up to expectations now. But Chapter One provides what you want in a horror film. You have a great villain. You have characters you can relate to and like. You have memorable moments. And you’ll enjoy yourself because it’s a film that actually has heart and treats its source material with a ton of respect. It didn’t scare me unfortunately, but it may scare someone else. IT is, without a doubt, one of the best Stephen King adaptations ever put to film. I’m so happy it’s doing so well, because that means horror is doing well. No one is in the Losers Club when it comes to that.