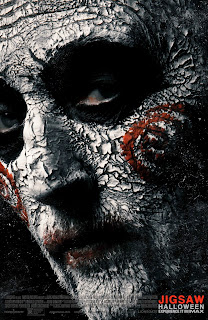 DIRECTED BY
The Spierig Brothers

PLOT (from IMDB):
Bodies are turning up around the city, each having met a uniquely gruesome demise. As the investigation proceeds, evidence points to one suspect: John Kramer (Tobin Bell), the man known as Jigsaw, who has been dead for ten years. 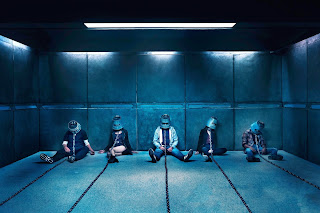 I’m sure modern audiences barely remember, but the SAW franchise was a big deal for the horror scene throughout the mid-to-late 2000s. It introduced us to James Wan and Leigh Whannell. It made Tobin Bell’s Jigsaw character a pop culture icon. And it helped create that annoying term, “torture porn”, for horror films where sadistic killers used elaborate traps to murder their victims. The first SAW from 2004 is a modern horror classic in my opinion due to its stylish direction, inventive storytelling, and a twist that everyone should have some coming but somehow we never did. The sequels have had their ups and downs. In fact, the original intended trilogy is still some great stuff. The last few sequels were pretty much just cash grabs - except you SAW VI, we still love you. 2010’s SAW 3D: THE FINAL CHAPTER [not] was a weak ending to a franchise that started with a really strong foundation. It proved that the series had been milked dry creatively and even financially, looking like a shell of its former self.

So it’s been seven years, and news about an 8th SAW film had been around for years. Considering how much time has passed and how the last SAW turned out, I was actually looking forward to a new SAW. Sure, a part of me wondered what the point of bringing the series back would be. Would Jigsaw even fit within the modern horror scene? Would audiences even care? But hey - if it could improve upon how the previous film had ended things, then why not? I mean, seven years is a long time to come up with new ideas to reinvent the franchise. JIGSAW has to be better than THE [not so] FINAL CHAPTER, right?

And after watching JIGSAW, yes - the 8th SAW film is better than both THE FINAL CHAPTER and SAW V. But it’s disappointing to see that no one thought about reinventing the wheel and making the series feel fresh. Instead, JIGSAW pretty much follows every other SAW sequel that exists - traps, red herring characters, and a convoluted twist that you’ll either admire, or roll your eyes at, for being ridiculous. I’m all for Lionsgate for wanting to bring the series back to make a profit. It’s just too bad I’m not all that eager to watch a new one if it ever comes to pass.

There are some good things about JIGSAW. I thought the Spierig Brothers did a great job behind the camera. Along with cinematographer Ben Nott, the Spierig Brothers give the film a more subtle visual presentation compared to the manic editing and yellow-green filters of the previous films in the series. It was nice to visually understand a SAW film for once, as the later sequels got too caught up in their style to be one-hundred percent coherent at times. It’s directed well, flows well, and the Spierig Brothers attempt to make a smaller scale SAW film look bigger and more expensive than it actually is. It’s not the greatest directed horror film ever, but JIGSAW is one of the better directed films in the series.

I also thought the acting was good. Everyone plays their roles well. Matt Passmore does a decent job as the leading man, Logan. Callum Keith Rennie is great as the lead investigator of the new murders, making you question where his loyalty lies at times. I also thought that of all the victims in the film, Laura Vandervoort did a solid job in creating a strong performance that has many subtle layers that start to unravel by the film’s end. Hannah Emily Anderson was also a fun performance as forensic pathologist Eleanor, who seems to be a fangirl for Jigsaw’s murders. And I love seeing Tobin Bell in anything, and his presence here is great as always. I thought this was one of the better acted SAW films.

And while the traps aren’t as memorable or as gory as the previous films, I did think the gore effects weren’t terrible. I thought the spinning cylinder trap was probably the highlight of the death traps really, as it brought some actual tension to the film. And the last trap with the head device surrounded by lasers was pretty neat as well, including watching a head split into multiple segments once the lasers strike.

But just like my gripes with 2017’s LEATHERFACE, it’s the narrative that brings JIGSAW down. You have seven years to come up with something fresh. So what do you do? You just do the same thing that the other films did! Talk about playing it safe just to make money. I was expecting something innovative somewhat, and it’s just the same film we’ve watched eight times already. Gory traps? Suspicious characters? Victims with a horrible backstory that make them less sympathetic as the film rolls through? A convoluted twist at the end that feels as if that’s the only reason the film exists? They’re all here. But I thought some of the previous sequels did these things much better in terms of execution. Some of the other sequels felt clever in their screenwriting. JIGSAW just feels forced when it comes to these things.

I’m kind of bummed that I’m even giving JIGSAW a less-than-positive review, since I actually like this franchise for the most part. Hell, I even liked JIGSAW more when I watched it. But after weeks of thinking about it, I felt more negative about it because I expected more out of it. Even if it was the worst SAW film because it was super different in terms of its approach, at least I could have appreciated it for trying something new. JIGSAW just feels underwhelming because it’s nothing we haven’t seen before in the franchise. And since it attempts to be a reboot, ignoring plot points from the previous films, the twist at the end was easy to figure out because they went to the tired-and-true storytelling that we saw in the first SAW. Sure, some of the victims’ backstories were interesting. And the new characters had interesting arcs at times. But it doesn’t change the franchise, or add anything new. And as much as I admire how they tried to sell us on the twist at the end, it honestly didn’t make any sense if you really think about it. It feels really forced. And if this twist is going to lead to more sequels, I may just wait until home video because how many times can I pay for the same thing but with a different cast? I know fans will love it, but horror has changed since THE FINAL CHAPTER. JIGSAW should have implemented some of that change and continued on that wave for potential future installments. Maybe they will if they ever do another one. But I think it may be too late by that point. But who knows - maybe Lionsgate will surprise us like they did with SAW VI back in 2009. 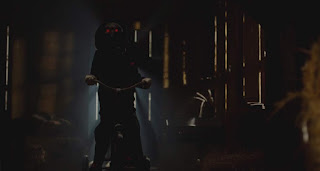 Not the worst SAW film in the series, but still a pretty disappointing entry in the franchise. I commend the Spierig Brothers for bringing a nice, refreshing visual style compared to previous SAW films. I also thought some of the traps were cool and the acting was mostly solid. But it just feels like the same old SAW film we’ve seen seven times already - but more tame and with a twist that feels more forced than usual. After seven years, you’d think the producers would try something different - or at least twist the usual storytelling around to create something new. Fun at times, but JIGSAW doesn’t bring anything new to the table. Hopefully the next installment [if it happens] changes the formula a bit. But I’m not holding my breath on that. For fans only.