The Watchtower of Justice: Superman Returns (2006) 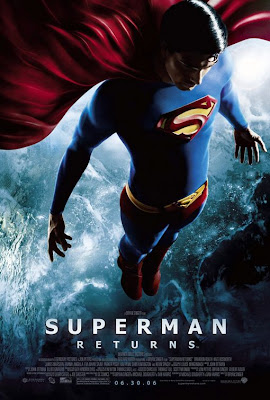 After the box office failure of Superman IV: The Quest For Peace in 1987, it seemed that the Superman saga was indeed closed for good.  Hollywood suddenly went crazy with that other costumed DC Comics character who wears a cape when Batman came to the cinema in summer 1989. Batman became a sensation and you couldn't go anywhere without seeing the Bat logo. Batman spawned three sequels and just like Superman, faded from the public eye after 1997's epic failure Batman & Robin. The 2000s saw a revival of the superhero genre with Fox and Marvel's 2000 hit X-Men, directed by Bryan Singer. Then in 2002, Sam Raimi found success with Spider-Man. All the sudden the superhero film genre was booming. Warner Bros. decided that it was time to resurrect their top two costumed heroes. Summer 2005 saw a rebirth of Batman when director Christopher Nolan released Batman Begins to good success. After achieving success with 20th Century Fox with his X-Men sequel in 2003, director Bryan Singer turned down directing X-Men 3 in order to revive the long dead Superman franchise.  Before Superman IV was a failure, WB and Christopher Reeve had planned to make a fifth film. In 1995, actor Christopher Reeve was in a horrible horseback riding accident that left him paralyzed from the neck down. Sadly, Christopher Reeve passed away due to heart failure from complications due to his illness in 2004. Bryan Singer wanted to revive Superman by treating this new film as if it were Superman III and a direct sequel to Superman II, yet set in modern day. Brandon Routh would replace Christopher Reeve as Superman/Clark Kent, Kate Bosworth would replace Margot Kidder as Lois Lane, and Kevin Spacey would take over the role of Superman's arch nemesis Lex Luthor from Gene Hackman. In summer 2006, Superman Returns flew into theaters to mixed reactions and not so super box office results.

Superman has been missing for 5 years after he went away to see if there was anything left out there of his home world of Krypton. Suddenly, he falls from the sky and crashes at the Kent Farm. Clark Kent returns to The Daily Planet to find that Lois is upset with Superman for leaving without saying good bye, is married to Perry White's nephew Richard, and has a 5 year old son. Meanwhile, Lex Luthor has been released from prison and is trying to destroy Metropolis and create his own continent by causing tremors in the ocean's crest. Luthor also wants revenge on Superman for putting him away. Will Superman's return make the world better or was the world better off without him?

I can remember first seeing the trailer for Superman Returns back when I went opening day to see Batman Begins. At that point in my life (I was 17 years old), I had never seen any of the Superman movies. Only bits and pieces of Lois & Clark, most of Superman The Animated Series, and the first few seasons of Smallville. Superman Returns was the first and only Superman movie I have seen in the theater before Man of Steel in a few days. My Dad and I went opening night. I remember thinking it was okay, but I preferred what I was seeing on Smallville and in Superman The Animated Series.  I gotta be honest, this is probably the fourth time I've actually watched this movie and the third time I've seen it on DVD at home. Yeah, this ain't the kinda superhero film I find myself watching over and over. Hell, I've watched Batman & Robin more than this film and that film was terrible. BUT, I was entertained by it so the 2 hours breezed by. One of my biggest complaints about Superman Returns is that it is too damn long and drags a lot. The Dark Knight is 2 hours and 24 minutes. The Dark Knight Rises is 2 hours and 36 minutes. But, both fly by because they are ACTION PACKED and ENTERTAINING! Superman Returns has some cool special FX, I give them that but it is not an action packed movie. All Superman does is basically mope about Lois or lift heavy shit. The scene where Superman saves the people in the airplane and lands it at a baseball stadium right on the field was cool. All of the scenes of Superman flying were cool. Superman using his heat vision and super breath was cool, but we don't get to actually see him fight anybody because all the villains are Human Beings and Superman can't punch one of us because it would kill us unlike someone with super powers like General Zod or a alien artifical intelligence like Brainiac or a Hell God like Darkseid! Thank the Heavens that we get to see some super action in Man of Steel this week!

Another issue I have is that this film didn't do anything fresh or different than Superman The Movie and Superman II other than having a whole new cast/crew and having a bigger budget for better special FX.  In my honest opinion, WB should have just rebooted the franchise like Nolan did with Batman, which is what they are doing this summer with Man of Steel. While I like the first two Christopher Reeve films a lot, they have kinda haunted the character. For too long, the general public and fans too wanted new Superman stuff to be like those movies. And apparently Bryan Singer did too as he played this as a sequel to Superman II set in 2006. Also another thing that truly irritates me and everyone else is that Lex Luthor is basically the main villain in every movie except for Superman II and III. Therefore, we haven't had the chance to get more of Superman's rogues in a film. It would be like having The Joker be the main villain in every Batman movie. Fans and audiences would get sick of it and want someone else as the villain. The Batman movies have been good about having a different set of villains in each movie.  That's not to say that I never want Lex Luthor to be a villain again, but give me a villain who's an alien along with him. I have a strong feeling that we will see Lex Luthor as a villain in Man of Steel 2, but I pray they use Brainiac along with him to give Superman both a Human and alien threat. One to outsmart and the other to physically punch through space.

The characters for the most part were played very wooden especially Superman and Lois Lane. In fact, Lois came off as a bit of a bitch in this film. Superman just looked sad and bored most of the time. Although Clark Kent seemed a little more alive. I dug the new Jimmy Olsen. Perry White wasn't angry enough for me unlike the other films. Also, Superman has a kid? Interesting...

Negatives aside, I did love Lex Luthor in this movie. I actually liked him more than the Luthor we got in the Christopher Reeve films. He seemed a little darker and more deranged while still being a maniac.  Like I said before, the special FX were pretty solid. Would have been better with some action though. I dug the opening credits sequence and the classic John Williams music score. I kinda dug the new suit. The movie looked good visually. The flashback scene with young Clark doing giant leaps through the cornfield was fun. I didn't feel like I was being tortured, just sitting for too long. The scene where Lex and his crew beat up Superman and Lex stabs Supes with a shard of Kryptonite was intense. I also dug when Superman tells his son what Jor-El told him, "The son becomes the father and the father becomes the son."

The acting varied. Brandon Routh was one I didn't care for as Superman, yet thought he was an okay Clark Kent. Still no Christopher Reeve though. He lacked the charm and warmth that Reeve brought to the role. Did not care for Kate Bosworth as Lois Lane. Sam Huntington was a good Jimmy Olsen I thought. Parker Posey annoyed me as Eve Teschmacher's replacement, Kitty Kowalski. Frank Langella was okay as Perry White but Jackie Cooper was better. James Marsden was okay as Richard White. It's obvious that Singer cast him after working with him on X-Men and X2: X-Men United. And Kevin Spacey outshined everyone in his performance as Lex Luthor, the greatest criminal mastermind of our time. I LOVED Spacey in the role so much more than Gene Hackman. It's a shame that Spacey didn't have an epic Superman movie to star in because I think he would have been great in a more action packed Superman movie.

The direction by Bryan Singer was hit and miss. His visuals were good, but the pacing just dragged and dragged. The movie should have just been 2 hours and had more action to juice it up to being more entertaining. Also many Marvel fans are pissed off at Singer for abandoning the X-Men franchise to direct this film, therefore letting Brett Ratner create X-Men: The Last Stand. Singer should have made the franchise feel fresh instead of trying to be Superman The Movie again. We're in a new generation than we were back in 1978 and want a Superman to be one for the 21st Century, not dwelling on the past. I would have been curious to see that Kevin Smith Superman movie. But, I am happy that we didn't get the Tim Burton Superman starring Nicholas Cage as the Man of Steel. Yikes! So with that, Singer's visuals were right but the story and tone were outdated.

Overall, Superman Returns is not a bad film but it is not really a good film either. It's just an average Superman movie, but not the thrilling sci fi epic that we DC Comics and Superman fans have been waiting for. That film my friends comes to theaters Friday to a theater near you! So go check out Man of Steel where we actually get to see some hardcore action and a Superman for a new generation!