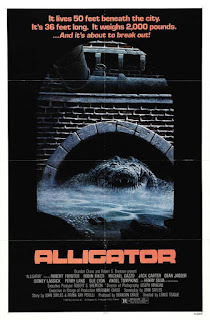 I wonder if Steven Spielberg knew that so many movie studios and producers would take what he did with his 1975 blockbuster JAWS to create their own versions of the same story. Movies like 1976’s MAKO: THE JAWS OF DEATH, 1977’s ORCA, 1978’s PIRANHA, and even JAWS’ own three sequels “ripped off” JAWS’ success to create their own fame/infamy for many audiences. Who knew a story by Peter Benchley would help create its own “animals-run-amok” horror sub-genre?

One of the many films considered to be a “rip-off” of JAWS is 1980’s ALLIGATOR. ALLIGATOR is a film that I hadn’t watched since I was a kid, liking it enough that I wanted to a reason to watch it again as an adult. Now with Animal Summer, I have my reason to see if ALLIGATOR is as good as I remembered. Fortunately for my adult eyes, ALLIGATOR ended up being better than my memory provided.

PLOT
During a vacation in Florida, Marisa’s family allows her to bring home a baby alligator as a pet. Once home in Chicago, her animal-phobic father gets rid of the alligator by flushing it down the toilet. Landing in the sewers, the alligator feeds upon lab-experimented cadavers to survive.

Twelve years later, random killings have plagued Chicago. Severed body parts are found through the sewer system, creating a panic amongst the city. To figure out what’s been going on, brooding detective David Madison (Robert Forster) is made in charge of the investigation. With the help of an older Marisa (Robin Riker), now a popular animal researcher, Madison figures out the killer is a giant alligator - who has decided the sewers aren’t enough, making it up to the surface to continue his rampage. 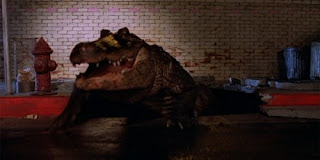 ALLIGATOR is one of the best “rip off” JAWS films ever filmed. Like PIRANHA, which is also quite good in its own right, ALLIGATOR is a smart, fun, and well-made movie that captures the spirit of why JAWS was so successful. It was obviously inspired by urban legends and news stories from the early 20th century, where tales of alligators appearing out of the sewers were big talking points about the dangers of alligators in big cities, while wondering how the alligators got into the sewer system to begin with. It’s a slasher film with an animal as the killer, while also providing a certain social commentary that makes you question whether the alligator is a villain, or a heroic victim of people’s ignorance.

It’s not surprising that ALLIGATOR’s script is so well done. The screenplay was written by PIRANHA scribe John Sayles, who was asked to change a script that involved a sewer alligator in Milwaukee who grew large in size after drinking large amounts of beer! I’m surprised SyFy hasn’t used this idea yet for their upcoming classic, BEER GATOR. Drunk alligators are dangerous, especially behind cars, yo! Seriously, Sayles classes up the original premise - turning a really silly premise and making it pretty serious and thrilling for its time [and even today, to be honest]. New World Pictures was known for their silly and funny [intentional or not] B-movies, but ALLIGATOR takes itself seriously as a creature feature that has a budget behind it to really capture the full extent of the terror.

The character development in ALLIGATOR is pretty solid. Detective David Madison is our hero - a disgruntled man who is haunted by the losses of his past, which affects his future relationships yet motivates him to solve this alligator case to protect the city he loves to make up for the past. He’s the only one who believes the gator threat from the start, having seen it for his own eyes, while the rest of the city, his co-workers, and reporters just think he’s losing it. He also makes the first connection to the local pharmaceutical company with the alligator, showing how smart and active he is. Marisa Kendall, an animal researcher, comes across as a strong, independent woman who, like David, is haunted by her past. Not only does she fall for David [maybe looking for a father figure that her own father wasn’t], but she’s an indirect reason for the alligator threat when she was a young girl. Then you get the rambunctious Chief Clark, who is torn between his loyalty and friendship with David and his professional ties to the city’s Mayor. Speaking of the Mayor, he suffers from JAWS-itis as he would rather make money than protect his citizens. Slade and his lackeys are the stereotypical evil scientists who have the government backing to protect them from any wrongdoing, even though they’re the reason why there’s trouble to begin with. And we have Thomas Kemp, your typical nosy reporter who ends up in trouble. And you even get a big-game hunter whose cockiness leads to more bad than good. These characters are all pretty similar to characters done in other animal-run-amok films, especially JAWS and PIRANHA. But they all work well here in ALLIGATOR, helping the flow the film when the title character doesn’t appear on screen to steal the spotlight. 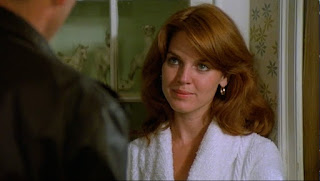 Not only are the characters strong, but John Sayles doesn’t hide the fact that he wants his social commentary to be heard. In many ways, ALLIGATOR is a criticism on vivisection, the government when it comes to class and social issues, and the media’s twisting of true stories into more scandalous ones. All these institutions enable the murders that the alligator causes throughout the city. The experimentation on live animals with chemicals and tossing the cadavers away when the lab results aren’t positive leads to the growth of the alligator. The media would rather disapprove David rather than listen and take him seriously about the giant alligator, which would have saved more lives. And the Mayor would rather protect an upper-class wedding to support the pharmaceutical company in exchange for money rather than protect his citizens. The alligator is less of a serial killer, and more of an avenging angel - going after the evil people who made him the way he is while getting rid of people who stand in his way. Yes, the gator does kill some innocent people because that’s what gators do. But he’s pretty much focused on who Sayles considers the sinners of his story. It’s an interesting storytelling tactic, making the viewer sympathetic towards the alligator rather than most of the human beings in the story. I, personally, root for the gator to get rid of these bastards, which is probably what Sayles had intended. Plus, it’s a lot of fun to watch an animal kill bad and/or stupid people in movies. So for that, the script is a success.

The special effects in ALLIGATOR are very impressive, considering it was filmed around 1979 or 1980 and the budget the film had to use. Richard O. Helmer did a nice job alternating designs for a fake crocodile head seen from the side during chase scenes that looks pretty realistic, to a real-life giant crocodile design that breaks out from underneath the sewers to attack people. The gore is minimal, but the blood adds to the effect of this alligator murdering dumb folk. Nowadays, this would have all been done with CGI, making the attacks look really silly. With these practical effects, you’d really think there was a giant alligator terrorizing actors on a set. I really enjoyed it.

The direction by the awesome Lewis Teague really makes ALLIGATOR stand out from the rest of the JAWS imitators. Teague, while having fun with the script at times in terms of tone and pacing, still manages to take the visual presentation of the narrative seriously. Instead of a cheesy B-movie imitator, ALLIGATOR plays out mostly as a detective/police drama with a man hunting down a serial killer - in this case, an alligator. There are also obvious slasher elements at play here, with the alligator kept mainly in shadows and silhouettes for half the film - just shots of his eyes and mouth to give you a feel of the size of the animal. We also get first person point-of-view shots, in red tint, through the alligator’s perspective. The scene where the gator finally reveals itself out of the sewers is a memorable visual, as well as the fun and chaotic final act where the alligator pretty much destroys a wedding. It’s no wonder Stephen King would hire Teague to direct both CUJO and CAT’S EYE after this film. Teague knows how to balance fun, drama, and terror. 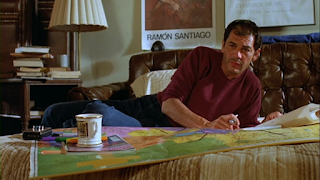 The acting is also pretty great here. Robert Forster is the real reason why ALLIGATOR is highly regarded by those who have seen this film. Any other actor would have treated the premise as a joke and winked at the audience, but not Forster. As David Madison, Forster plays a serious cop who is haunted by his past and is determined to eliminate the ghosts by saving the city that he loves, but doesn’t really love him. Forster constantly shows remorse and a social awkwardness in his character that makes us feel for him and want him to succeed. He’s the reason why the film is an easy watch, because our lead character is someone we are invested in. Robin Riker is also pretty great as Marisa. She plays a smart, independent woman who rushes into action rather than shy away from it. Her banter and relationship with Forster is believable and she makes a great sidekick for him. Character actors Michael V. Gazzo, Dean Jagger, and Sydney Lassick do well in their roles, especially Gazzo as the neurotic Chief. Henry Silva has fun as the big-game-hunter, Col. Brock. And Bart Braverman is wonderfully snarky and sarcastic as the nosy reporter. It’s just a nice cast of actors who play their roles seriously and all elevate what could have been a silly script. 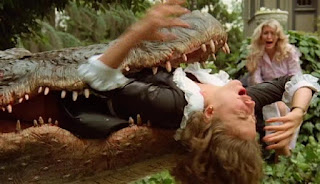 I honestly did not expect to love ALLIGATOR more as an adult as I had 25 years ago. For a JAWS imitator, Lewis Teague and John Sayles manage to craft a smart, fun, silly, and extremely watchable police drama/slasher film starring a giant fake alligator that terrorizes a city. The social commentary makes you question whether the alligator is a hero or a villain, the special effects are well done considering the budget, the visuals are more than solid, and the acting [especially Robert Forster] is just fantastic. It’s not as good as JAWS, but it still manages to stand out and be its own thing. ALLIGATOR is definitely one animal-run-amok movie you shouldn’t miss.