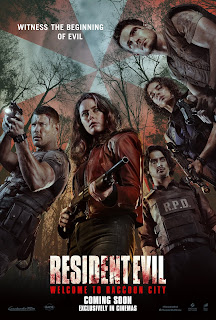 Once the booming home of pharmaceutical giant Umbrella Corporation, Raccoon City is now a dying Midwestern town. The company’s exodus left the city a wasteland…with great evil brewing below the surface. When that evil is unleashed, the townspeople are forever…changed…and a small group of survivors must work together to uncover the truth behind Umbrella and make it through the night. 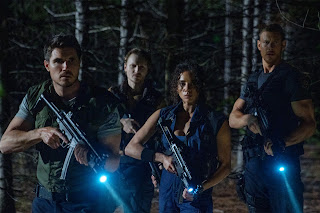 In 2016, Paul W.S. Anderson's era of RESIDENT EVIL films ended with its FINAL CHAPTER - a movie that showed how low the series had deteriorated in terms of quality despite each entry having their fun moments. The Milla Jonovich led franchise was a huge money maker for Sony, however, as while the films sometimes struggled domestically, they were beloved enough in the global box office to keep the series going as long as it did. So you knew that even if Anderson and Jonovich were done with their version of the live-action adaptation, Sony would just reboot it to keep the IP going.

So here we are in 2021 with a new RESIDENT EVIL film called WELCOME TO RACCOON CITY, a reboot prequel that takes place in 1998 during the events of the first two Resident Evil video games. Right there, I should have known I would already look a bit negatively on the film. I mean, who was the genius who thought that adapting two video games into a 107 minute movie was a good idea? Surprisingly, the narrative does a decent job presenting a Cliff’s Notes version of both games - way better than any of the previous RESIDENT EVIL films did. But it just seems like a waste when you can just adapt one game at a time to length the franchise’s run. Why the need to cram a ton of stuff in a film that’s barely two hours? I don’t get it.

Having to adapt two games created a few sacrifices along the way. The big one is the lack of character development for most of these characters. Claire Redfield gets the most depth and is a joy to watch in this film, but the others either get the shaft or have totally different interpretations of their characters that it was a bit jarring at first. In particular Leon S. Kennedy, who is treated as sort of incompetent and almost the comic relief of the film, when gamers would know the character as a bad ass cop who seems pretty capable at his job. But at least he brings some levity to the film and he actually has a character arc that plays out decently. Chris Redfield is a frat boy with a gun, but at least he looks like the video game Chris. Jill Valentine barely gets anything to do really, even though she manages to shine whenever she can. And Albert Wesker seems to be a bit too young to be the villain fans know him to be. His character felt off and I’m hoping that changes if the filmmakers continue this new franchise going forward. I actually liked the Wesker from the previous series and this version is nowhere close to that. But unless you’re a big fan of the Resident Evil video game franchise, you wouldn’t really know who these characters are because the film doesn’t have the time to flesh them out in a significant way. You shouldn’t have to rely on the source material for audiences to know who they’re watching, as some viewers will go into this fresh. 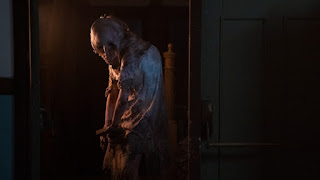 Also, the film barely gives us anything about the Umbrella Corporation. I mean… that’s your main antagonist and the reason why this whole zombie outbreak is even happening! Say what you want about the Anderson-led franchise, but those films took the time to establish Umbrella and give audiences a reason to hate them. We’re just given random facts about Umbrella and their actions so matter-of-factly that it’s all surface level and no depth. Is a look into Umbrella being saved for a sequel? Possibly. But again, you’ll wonder why this company destroyed this city if you aren’t familiar with this franchise at all. And when information is given, it's generic. Meh.

The look of the film also doesn’t hide the film’s budget. For $25 million, it looks way better than it ought to. But compared to other theatrical films in the market, WELCOME TO RACCOON CITY looks like it was made for SyFy or maybe Netflix. The zombie effects, while fine, don’t really stand out. There’s only one Licker in the film unfortunately, and it looks like it came straight from a video game with its questionable CGI. The locations also look like the ones in the first two games, but there are certain sets that look like the inside of a trailer that made me scratch my head. This film looks and feels like a B-movie you could find on cable on a Saturday night and not know that this popped up in theaters months prior. The original 2002 film was flashier and more exciting to look at. I think turning this into a series would have benefited this kind of budget and storytelling, as it would have allowed for more time to establish characters and the situation happening around them. 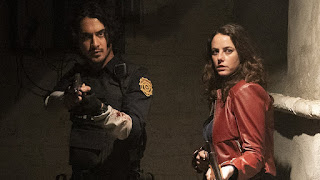 All that being said, I kind of had fun with this movie. The easter eggs and first time appearances of certain video game characters had me acting out that Leonardo DiCaprio meme from ONCE UPON A TIME IN... HOLLYWOOD multiple times. It was super awesome to see Lisa Trevor represented in a live-action adaptation, as she’s one of the more interesting side characters in the first video game. I thought director Johannes Roberts created some nice moments of tension and suspense in the second half of the film, creating a more eerie atmosphere that none of the Anderson films managed to do. I know some found it cringey, but I was really amused by the Jennifer Paige “Crush” scene. It was so bad that I laughed out loud. And for the fact that the film crams two video games into an almost two-hour movie, the pacing could have been a lot worse. In fact, I think Johannes Roberts handled it much better than I probably would have if given the same task. But there was a lot missing that could have been saved if Roberts just focused on one game instead of two. But for what it was, it was tolerable.

The acting is fine for what it is. But the standout is definitely Kaya Scodelario as Claire, who is given the most to do and Scodelario captures the character’s essence extremely well. I always thought Scodelario should have been a bigger name by now. She was good in THE MAZE RUNNER movies. I really liked her in CRAWL. And I think of all the actors, she equipped herself the best here. Robbie Amell did what he could with Chris, while Avan Jogia had an interesting take on Leon that grows on you as the film moves along. It was also cool seeing Donal Logue do his thing, while Neal McDonough sure has that villain role down pat at this point, doesn’t he?

I feel only fans of the video games will appreciate RESIDENT EVIL: WELCOME TO RACCOON CITY more than those who aren’t. The blending of two video games was a weird choice and the narrative has a few slow parts that could lead to some boredom. The characters aren’t fleshed out much [besides Claire and Leon] unless you’ve played the games and some of their motivations seem a bit empty because of that. But the acting is tolerable to good [Kaya Scodelario is the reason to watch], Johannes Roberts’ direction has some genuinely good moments of tension every now and then, and some of the narrative choices are so random and dumb that you won’t help but be entertained by them [that “Crush” scene had me laughing more than I had expected]. This movie has its heart in the right place and making this new franchise closer to the source material is definitely the way to go. It’s just too bad that after all these years, they couldn’t have made a better movie to reflect that. But I’m open to see more if Sony is down for another zombie outbreak.