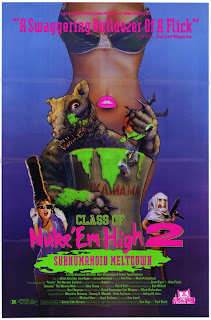 
PLOT
Six years after the events of the original CLASS OF NUKE "EM HIGH, the once demolished Tromaville High has now become the Tromaville Institute for Technology, or TIT for short [giggedy...]. In a smart move, the college is located right by, and even inside, the Tromaville Power Plant! An intelligent, yet scantily dressed, genetic scientist named Professor Holt (Lisa Gaye) has evolved human life, creating a genetically enhanced human being who matures within nine months and will do any jobs normal humans would refuse to. These Subhumanoids tend to have enhanced abilities, and can be identified by their belly buttons that are actually mouths.

A reporter for the Tromaville Tech 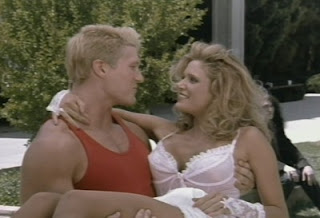 Times, Roger Smith (Brick Bronsky), is a bit of a nerd and a recluse even though he's blond, good-looking, and has a bodybuilder physique [as well as bad body odor apparently]. As part of some expose, he takes part in a sex experiment where he's Number 65 [sloppy 65ths...lucky guy] to get it on with a Subhumanoid named Victoria (Lessa Rowland). Because she's decent looking, and mainly because she put out, Roger falls for Victoria and vice-versa.

Roger soon learns that Victoria is a Subhumanoid and accepts it. But he begins to worry when other Subhumanoids begin to melt down into green slime, leaving only some furry creature that seems to be the true body of a Subhumanoid - with the human appearance as nothing but a shell. Roger also learns that Dean Okra (Scott Resnick) is forcing Professor Holt to create a quick antidote to make the Subhumanoids into his slaves. Unfortunately there's more problems, as a squirrel has eaten some of the nuclear waste and has grown into massive size, destroying everything in its path. What's Roger to do?

HITS
- A weird and surreal storyline. Let me just get this out of the way - I'm not praising the screenplay as it has issues that overwhelm the film. It's a double-edged sword, really. But I will compliment the story on the fact that there's a lot of stuff that's going on to the point where you'll always be somewhat interested in something that's being told. We have the Subhumanoid subplot. We have a love story. We have a battle of good vs. evil. We have a giant squirrel puking on everything and destroying stuff. We have girls with big boobs all over the place. It's a strange film that really appeals either to various audiences, or no audience at all. It's far from perfect and there's too much stuff going on at times, but I appreciated the attempt to create a narrative as cohesive as possible. It's not going to win any kind of prize, but I was somewhat entertained by this dumb story. It's a B-movie from Troma - what do you expect? Shakespeare?

- Tromie. The giant squirrel is probably the highlight of the film. He only appears in the Final Act, but he's a breath of fresh air when 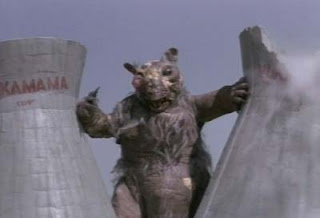 he shows up. The film starts getting pretty tired by this point, so any appearance of a giant rodent grabs your attention right away. He starts out small, eating nuclear waste. The build up is comical, as we hear Tromie's thoughts in his head in a cute voice. Then he grows massive and starts destroying the college, the power plant, and killing people as if he were Godzilla on a rampage in Japan. I think it's also ironic that the main villains are a group of idiots called The Squirrels, yet no Squirrel is a major threat until a real one named Tromie arrives. Not the greatest movie monster ever made, but he's a fun one during the film where it needs it.

- The "special" effects. The monster creature in the first CLASS OF NUKE 'EM HIGH looked amazing for such a small budget. Any monsters in the sequel are nowhere close to look as good. But I do love stop motion animation, even when the creatures look ridiculous or hard on the eyes. We get some here, like a bulimic dolphin, a winged insect-human hybrid, and even a weird looking lizard thing. Tromie is obviously a man in a rubber costume, but it actually made me laugh, so that's a good thing. We also get a lot of people puking green stuff, as well as melting into fuzzy rubber creatures. It looks cheap, but I'm guessing that was the point. Nothing phenomenal, but decent for what it was.

- The soundtrack. I wish I could tell you the names of artists and songs, but it seems difficult to find any actual info on the film's soundtrack. But it does use some pop and pop-rock music that fits the comedic tone well. I liked it.

- Toxie cameo. The Toxic Avenger himself shows up during one of the scenes in a really surreal/meta moment. When he appears, the director tells Toxie that he's on the wrong set and that he's interrupting the filming of CLASS OF NUKE 'EM HIGH PART II. I like that the film was self-aware of itself, meaning that you know that you're not really meant to take anything that you see and hear seriously. Does this make the film better? No. But it's a fun little cameo by Troma's mascot and an interesting cinema move.


MISSES
- Too much going on. Remember when I mentioned earlier that the story was a double-edged sword? Well that's because even though you'll never really be bored by the abundance of subplots, there's really too many of them to follow and not enough depth needed to make them mean anything in the end. Roger and Victoria get together only because Victoria was the first girl to sleep with him. Other than that, it's cliche and there's no real reason why Victoria falls for Roger. Maybe he had great sexual prowess along with his bad B.O., I don't know. The Subhumanoids aren't really explained. They seem to have enhanced agility and possibly super strength, but it's never really explored. Why they have mouths for belly buttons is a head scratcher. Honestly, what was the point of that? Tromie only exists because the film needed a monster to sort of relate to the first film. There's so much more that really needs to be developed, but it just happens for 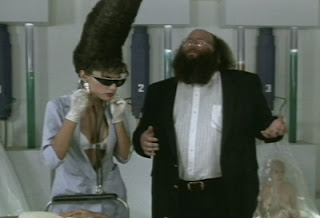 the sake of happening without any sort of reason why it's there to begin with. Plus we also have random moments where Roger, as a narrator, must point out in order for the audience to understand why we're watching this. By the way, I wish the film had started at the beginning, instead of starting at the end so Roger can narrate throughout the entire film. It was kind of annoying and unnecessary.

Look I understand Troma films aren't known for their really deep storylines. I know as a B-movie, this sequel is meant to be silly and illogical. But if you're expecting people to watch a film for ninety minutes, at least give people something they can latch onto. Will you be bored? Probably not. But you'll forget most of it once it ends. The first CLASS OF NUKE 'EM HIGH had memorable moments and interesting characters. The sequel doesn't really have that besides a random few. You end up a bit confused because there's just too much to absorb. That's why having SIX writers is never a good thing - too many cooks in the kitchen.

- The direction. The "too much" issue affects the visual presentation as well. With THREE directors, it does manage to look decent. But again, every frame has a ton of activity in both the foreground and the background. This depth of field is great, because it makes it realistic looking. But when EVERY scene has this and you're trying to focus on what's in the foreground, it becomes a bit jarring and distracting. Important stuff can be happening in the foreground to enhance the story, but I'm busy watching characters act silly in the background. People with ADD are going to have an aneurysm trying to focus on everything.

Plus while the tone is consistent, the pace is definitely uneven. There are lulls in the story that feel more like filler rather than anything substantial to the narrative. If this film was edited 15 minutes shorter, you'd still get the same film but in a tighter package. Funny enough, the European version is actually 10 times longer than the version I watched! I couldn't imagine what was added.

All I'm saying is that it's not a bad looking film at all. Yes it looks very low-budget, but that goes for every Troma film. It's just that the pacing was off and it could have ran smoother. Take out the scenes of filler and the jokes that obviously won't work and put together a shorter film that would come across as more effective. Problem solved. 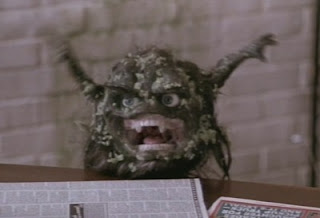 PART II: SUBHUMANOID MELTDOWN doesn't come close to matching the original's charm and cult status. But it's an okay sequel that has some cool moments and interesting, yet silly ideas. I think if the film was more focused on just the Subhumanoids and less on everything else that was going on [giant squirrels, establishing too much on what goes on at TIT, narrating things we can actually see for ourselves], it would have been more effective. Not a recommended watch really. But if you're a Troma fan and like women with "melon heavy breasts", then CLASS OF NUKE 'EM PART II is worth attending for a semester.