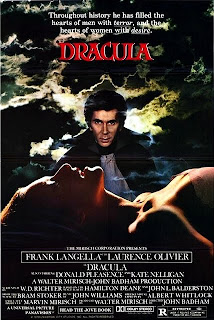 
PLOT
In a retelling of Bram Stoker's classic novel, a ship crashes ashore the coast of Whitby during a massive storm. The only survivor seems to be Count Dracula (Frank Langella), who moves into a mansion at Carfax Abbey, where he becomes neighbors to psychologist, Dr. Jack Seward (Donald Pleasence). What Seward 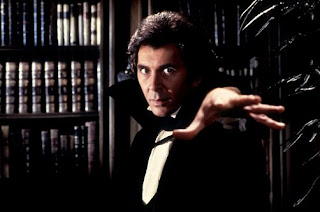 doesn't know is that Dracula is one of the strongest vampires to have ever lived. He also doesn't realize that Dracula has been at sea for too long, causing his hormonal urges to really kick in as he has lustful eyes towards Seward's daughter Lucy (Kate Nelligan) and her friend, Mina Van Helsing (Jan Francis).Dracula seduces and kills Mina, before she's reborn as a vampire. At her funeral, Mina's father, Abraham Van Helsing (Laurence Olivier), investigates his daughter's death and deduces that Dracula may be a vampire. While everyone in town doesn't believe him, the thought becomes more convincing when Lucy begins suffering the same fate as Mina. This brings Abraham together with Seward and Lucy's fiancee, Jonathan Harker (Trevor Eve), to stop Dracula, as the vampire plans to make Lucy his immortal bride.

HITS
- The direction. John Badham, who previously directed 1977's classic SATURDAY NIGHT FEVER, and would eventually direct 1983's WARGAMES and 1986's SHORT CIRCUIT, does a very good job bringing the play adaptation of the Dracula story to the big screen. The film has great production values and a ton of style. The framing and composition is great. The pacing is more than decent. I love the washed out look of the film [even though those who watched it in theaters got to see it in full color - which would be interesting to see as well], and how certain scenes got the color treatment. Badham had originally wanted the film to be in black and white to mimic the 1933 Bela Lugosi classic, but he was forced to keep the film in full color until the home video market allowed him to change the look in his original vision.

There's definitely a feeling of romanticism in this version of DRACULA rather than horror that's consistent from beginning to end, which is done quite nicely. There are some horror moments, like a throat getting sliced at the beginning of the film, a vampire confronting the protagonists in a dark mine, and the climax itself. There's a great sense of artistry here that I dug.

I also have to commend Gilbert Taylor's cinematography. DRACULA has a great gothic look and your eye is pleased the entire way. Just a visually stunning film that still looks fantastic in 2012.

- The acting. One of the strongest aspects of this version of DRACULA are the actors who give their own interpretation of the classic novel. Frank Langella is fantastic as Count Dracula. Like Lugosi, Langella had played the role on stage first. Instead of creating a terrifying portrayal of the character, Langella plays Dracula as a romantic savior and with a bit of sympathy as well. Langella gives the role depth by crafting an intelligent, yet witty figure who has a ton of charisma and a presence that makes you feel something for him other than fear. I liked Langella in the role.

The other actors are great as well. Laurence Olivier was pretty frail and ill at the time of filming, but he's very solid as Abraham Van Helsing. The accent is uneven, but more hit than miss. And he provides a moral center to the film that's 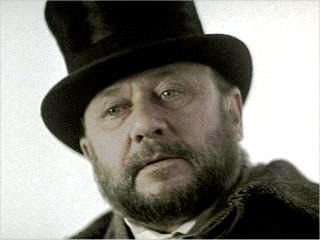 lacking until his character arrives. He plays a great foil to Langella. Also great is Donald Pleasance as the quirky and odd Dr. Seward. Pleasance seems to be having fun in the role and I thought his performance was comical, but in a good way. Kate Nelligan as Lucy is also a stand out. I liked the focus and determination she gave the character. Plus she was sexy as well, which helped make Langella and Nelligan look like a very handsome couple. I thought everyone brought something to the film and really treated the material with respect. No complaints about any of the actors here.

- Dracula's 70s fro. Yes, it looks silly to see Dracula sporting his Studio 54 hairdo while he's trying to get it on with women. But it entertained me and gave the character a different look no one else had presented before. It dates the film, sure. But it put a smile on my face each time Langella appeared. So I'll let it slide.

- The different take on the story. While I would have preferred a more horrific vision of the Dracula character, I can appreciate and respect that they tried to turn Dracula into a sex symbol who wants love rather than just blood and power. DRACULA was actually developed from a 1976 Broadway show that was very successful [also starring Frank Langella as well], and complimented on the romantic take on the story. In a lot of ways, DRACULA presents the title character in a likeable, sympathetic light. He's handsome. He has charisma. He's charming. He never comes across as purely evil, but a man who's on a mission to find eternal love, even if it's executed in a terrible way. DRACULA was also one of the first vampire films where Dracula [or vampires period] were able to withstand daylight, giving the excuse that night is happening somewhere in the world. If you're looking for a ferocious Dracula who's a sexual deviant and a serial killer, you won't find it here. But if you want a love story, then this is the road you need to travel on. Does it fully work? No. But it's interesting.

- The score. John Williams composed the score to DRACULA. Right there, it makes it an instant hit. A lovely soundtrack that fits the film really well.


MISSES
- The love scene. As cheesy and hokey as the presentation is during this very infamous scene where Dracula seduces Lucy and has sex with her, it made me laugh at how bizarre it is. I mean, red laser beams?? Really? Was this supposed

- The name switch. While it does allow for some characters to enter a bit more naturally into the story, I still think switching the Lucy and Mina characters will end up confusing those who have read the novel or watch other version of the Dracula story. It took me a while to get the names straight because I'm familiar with the original version. It doesn't hurt the film at all really, but purists might be up in arms about this change.

- Love story. DRACULA is a romantic drama rather than a straight-on horror film. Dracula and Lucy are meant to be in love with each other. As outside forces try to pull them apart, they just seem to come back together stronger. Well, that would have been the way I would have seen and felt it, if the film actually allowed the two characters to have more scenes together.

There's no depth at all to make this love story work. Dracula and Lucy barely have any scenes together, and rarely have moments alone where I can feel that they two are destined to be together. There's obviously an attraction, but it's based more on lust and control [on Dracula's part] rather than a connection based on the heart. The only reason people buy the love aspect is because that's how DRACULA was marketed. But it never worked for me because there was no realistic build to it. It happens for the sake of it happening, rather than it being a natural part of the story.

including the remake of NOSFERATU THE VAMPYRE, SALEM'S LOT, and the comical LOVE AT FIRST BITE. But DRACULA stands out by focusing less on the horror story, and more on the romantic side of the famous vampire. Great performances, excellent production values, and an interesting take on the classic story make this one worth seeking out even with its flaws. If you're looking for something scary though, this is a definite pass. But if you're looking for a different version of Dracula that relies more on style and drama, then this adaptation is for you.