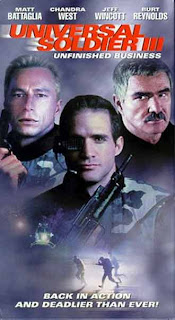 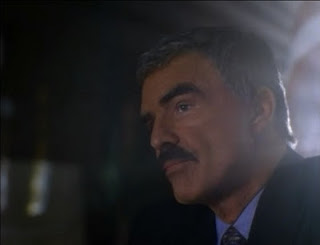 an Chioran)] who she feels could release the story about the UniSol program to the media and the entire world. Before anyone can make that happen, both end up in a hostage situation where Veronica's ex gets fatally shot. Obviously Luc manages to save the day and kill the terrorists, but Veronica is believed to have been working with them - as well as Luc being seen on television, which infuriates some Government officials who want UniSol to remain secret.

Luc and Veronica end up coming back to the United States, where both are still wanted and learn that Luc's parents and their home were burned down in a fire. Luc realizes that the Universal Soldiers did this, under the control of Deputy CIA Director Gerald Risco (Burt Reynolds), who created the UniSol program and names the soldiers after him. Apparently Risco is a dirty government official, using his creations to steal a shipment of gold that's being sent to the victims of the Holocaust.

While Luc and Veronica plan revenge against Risco, Dr. Walker (Richard McMillan) takes some of Eric Devereaux's (Jeff Wincott) DNA and makes a clone of him. He raises the clone as his own, using him as a weapon to bait Luc and bring him back to the UniSol program.


I have three words for UNIVERSAL SOLDIER III: UNFINISHED BUSINESS:

- Slightly better acting than in UNIVERSAL 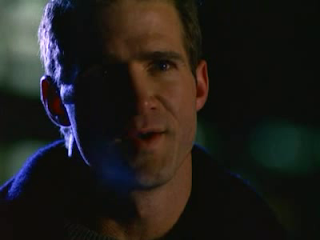 SOLDIER II: BROTHERS IN ARMS. Again, nothing exceptional or anything. But at least the actors here seemed a bit more comfortable with their roles this time around. Chandra West and Jeff Wincott did well just like in the first unofficial sequel. Matt Battaglia, who was awful in the last film, fares a bit better in this installment. While he was still a bit wooden and robotic at times, his acting improved as the film ran on. He was more human in the final act of the film and I liked him a lot more. Richard McMillan was decent as Dr. Walker, just like he was in the last installment. And even though his Irish accent went in-and-out like a groom on his wedding night, Burt Reynolds and his presence somehow made the film more important than the last one. It wasn't great thespian work or anything like that, but I bought the performances more in this installment.

- More interesting subplots. Unlike UNIVERSAL SOLDIER II, this installment had different subplots going on at once that had me involved in what was happening on screen. Since this 90-minute film was meant to be two one-hour episodes, UNIVERSAL SOLDIER III: UNFINISHED BUSINESS seemed to be what the rest of the planned season would have been about if the series had actually been picked up by The Movie Channel. Luc's life transitions after his parents are murdered, his "brother" returns, and his bond with Veronica Roberts grows. Also, with the return of Gerald Risco, the guy who created the UniSol program, the main villain of the show was set up and would have led to some decent confrontations between the two parties. This is other stuff, like Veronica's past being slowly revealed, and Dr. Walker's obsession with Luc and using a clone of his brother to bait him and prove that he could just create a better Universal Soldier out of DNA. Plus add in a hostage situation and more scenes where things actually happen rather than for padding. Now as for how they're executed, that's a different story I'll get to in just a moment.

- Better use of soundtrack. While the music wasn't great and still kind of annoyed me, at least it was used at the right moments. Plus we didn't have songs that didn't relate to the scene they were accompanying. Wish the soundtrack was more interesting to listen to though, but at least my ears were spared this time around.

- The direction - again. Jeff Woolnough returns as director and the visuals are just as terrible as they were in the l 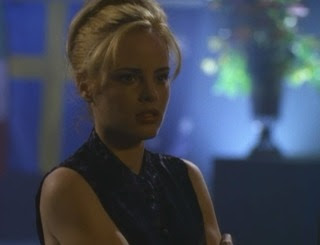 ast film. Constant use of slo-mo was annoying. Quick jump cuts and edits were distracting as usual. The action sequences were horribly choreographed and lacked any sort of energy. Again, I'm sure the budget was small for this and the film couldn't look more than what it was - two television episodes. But the production values were still pretty bad. And the action - I don't count someone shooting a gun, walking away for two minutes, shooting again, walking again for two minutes, and shooting a third time as really exciting action sequences. I've seen cheaper movies with more energy and better choreography. There was more action in this one, but it still wasn't great. Oh well.

- The execution of the narrative. Like I mentioned earlier, there's more going on in this installment. That's a good thing because the last film didn't have enough going on. But just because you have interesting ideas doesn't mean that they'll come across as more than just ideas. The depth level in UNIVERSAL SOLDIER III: UNFINISHED BUSINESS just isn't there to make these ideas matter at the end. Gerald Risco wants to steal gold - but it doesn't really go anywhere. For one, it doesn't help that Risco is barely in the film to begin with. You'd think Dr. Walker was the main villain with his massive screen time. Hell, I don't even remember why he even wanted the gold to begin with. That's not good storytelling! Also, Veronica's fugitive status doesn't really seem like a big deal since she pretty much walks around in bright daylight with hardly anyone recognizing her unless there's a Wanted poster of her nearby. And she gets pardoned at the end by uncovering the UniSol program. Why would she be pardoned for doing that? The program is Government funded! Makes no sense. The biggest one really had to be the Eric clone. He's raised in a lab his entire life, thinking Dr. Walker is his dad and that Luc is the enemy. When Eric and Luc have their confrontation, Eric remembers Luc as his brother. But Eric couldn't have known that if he were a clone. DNA doesn't work that way. It left me completely baffled! Plus we got another person who didn't react well to the UniSol reprogramming, but it was never explained why this person had the ability to reject it while most others can't. I'm glad the writers brought up multiple sub-plots to keep the film moving, but they were just handled very poorly. 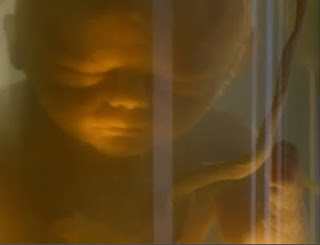 s a slight improvement over UNIVERSAL SOLDIER II: BROTHERS IN ARMS. Even so, it's still a bad flick with a shallow narrative [with great ideas that don't matter] and visuals that will leave many bored. At least the acting was a drop better and the soundtrack wasn't such a terrible distraction. But I wasn't really entertained by this one either and I'm kind of glad these two films were "erased" from canon. I'm sending UNIVERSAL SOLDIER III: UNFINISHED BUSINESS to the WTF? Vault where it can be reprogrammed along with its "unofficial" brother-film. I'm done with this franchise for the time being. As far as I'm concerned, these two UNIVERSAL SOLDIER sequels can...