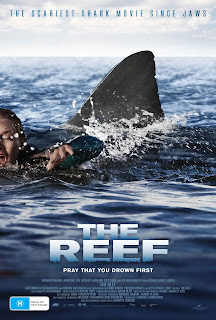 
PLOT
Based on a true story in Australia, five people set out on a boat to scuba dive and enjoy the ocean scenery. Warren (Kieran Darcy-Smith) owns the boat and Luke (Damian Walshe-Howling) rents it out. Luke wants to show the locale to his visiting friend from London, Matt (Gyton Grantley), his girlfriend Susie (Adrienne Pickering), and Matt's sister Kate (Zoe Naylor) - who happens to have had a romantic relationship with Luke. The five enjoy the sailing and the scenery around them, reconnecting in more ways than one.

Unfortunately, the boat hits a large coral reef and it capsizes. With no land in sight and no help nearby, the group wonder what their next step needs to be. The current is moving south, yet Australia is twelve miles north. Luke believes that putting on scuba equipment and swimming their way towards northern land is their best bet for survival, using boogie boards as floatation devices. While Matt, Susie, and Kate reluctantly agree to swim with Luke towards land, Warren refuses due to his uneasiness about what may be inside the water, feeling he'll be safer waiting on the hull of the capsized boat. As the four swimmers make their way towards land, they soon realize that they're being surrounded by sharks, who seem to be hungry. 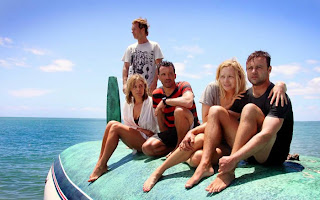 - The simple narrative. THE REEF may be the easiest film I had to review for in quite a while since the story is so simple and doesn't rely on twists and turns to keep the viewer's interest. The closest film I could compare it with is 2003's OPEN WATER, a film that made swimming in the water sort of creepy again due to the presence of sharks. Both are based on true stories. Both involve couples who have to keep each other calm in order to survive. Both involve sharks eating people. And both films feel pretty authentic, although THE REEF is more dramatized while OPEN WATER felt more like a documentary of sorts. Still, both films prove that a thin plotline can go a long way if the right elements are in place.

There's more character development once would expect out of a film like THE REEF. While the film is mainly five people trying to survive an ocean that's infested with sharks, we know just enough about who these people are to sort of feel connected to their struggle. Luke is the heroic, adventurous one. He's the leader, as he makes the plans and tries to keep everyone calm. Out of everyone in the film, he's the most active character. He also has a backstory with his best friend's sister, Kate, who was once an ex-girlfriend he never got over [and vice-versa]. This subplot never feels forced, and you want to see them connect on that level again - which happens under the dire of circumstances. Kate, herself, is also pretty active as a character, but only when she needs to be. At one point in the film, she refuses to swim with the others to find land. But she doesn't want to be apart from Luke, so she changes her mind and ends up being his focus for survival. I felt the dialogue and the moments between these two characters felt natural and I wanted to see what would happen between them.

Matt and Susie, Kate's brother and Matt's girlfriend, aren't as interesting of characters. But that's okay since they do add to the more memorable moments of THE REEF and play their supporting roles well. As for boat owner Warren, he's the character you'll want dead the moment he opens his mouth. He doesn't want to go in the water. He doesn't want to help his friends find help. He would rather have everyone else do the work for him, feeling that staying in one place will be his salvation. I thought the line that he says to Susie as he sees her in a wetsuit - "You look like a seal. Sharks love seals." - made him the ultimate douche. If anyone deserved to be shark food, it was this asshole. There's always one.

I think the best character in the film is the mysterious ocean itself. All the characters are afraid of it, unsure of what may be beneath of surface. In fact, the characters are in the water for quite a bit before we see any sharks pop up. Then they disappear, then reappear. You never know when the sharks are coming and what the ocean has planned for these survivors. I thought the way the water was used was great.

You don't need a ton of depth in a film like this. The fact that these characters are put in a situation most of us would not want any part of tells the tale well enough for any viewer. Everything else is just a bonus. I thought the storytelling here and the dialogue was pretty much perfect for this kind of film.

- The direction. For his second film [the first being a crocodile movie called BLACKWATER], Andrew Traucki directs a fantastic killer shark survival film. Sure, Traucki was probably very inspired by OPEN WATER, since the plot and the way it's directed at times are similar. But while Chris Kentis directed OPEN WATER as sort of documentary-style visually focused more on the drama, Traucki directs THE REEF as a thriller that wants to creep you out. While I didn't find the film scary at all, I did think Traucki brought a ton of tension and suspense to the film. It starts out slow and builds and builds until a shark appears halfway through the film, killing one of the characters 56 minutes into its runtime. Before that, Traucki gets us used to the characters and the struggle they're about to face. Once we're comfortable, he brings out the terror and never lets up after that. In fact, the final act is really tense and I even jumped once. The pacing and editing are really effective here.

I also liked that Traucki used footage of real sharks instead of CGI or mechanical sharks [although some CGI is used, but barely noticeable]. He and the crew had shot real shark footage prior to filming THE REEF, incorporating these shots within the actual film. Through the editing, you get a real sense that a shark is really attacking these people. Those SHARK ATTACK films probably had a bigger budget than this film, yet THE REEF was able to use stock footage better visually than any of those films [well except for SHARK ATTACK 3: MEGALODON - best use of stock footage ever].

Traucki manages to create a sense of openness, while making the film feel closed in at the same time. The use of light and shadows creates some tense moments and make THE REEF an unsettling shark film that deserves a bigger audience. It looks beautiful and plays out extremely well.

- The actors. THE REEF wouldn't work as well as it does without the actors involved. While unknown to most audiences, I'm sure they're all pretty popular in Australia. Damian Walshe-Howling [awesome name] as Luke is the best actor in the film. This guy looks and performs like a potential superstar that could really go global if he wanted to. He has rugged good looks, can handle emotional and action scenes, and just has this cool vibe around him that will make guys root for him and women want him. He carries the film really well. Close behind is Zoe Taylor as Kate, who plays her conflicted role as sister, friend, and ex-girlfriend realistically well. She also plays terrified believably, especially during the final act. Adrienne Pickering is also good as Suzie, playing the frightened outsider. Gyton Grantley is okay as Matt, not really doing much but he's not terrible. And Warren plays a subtle douche as Warren. I really liked this cast and thought the acting was strong. 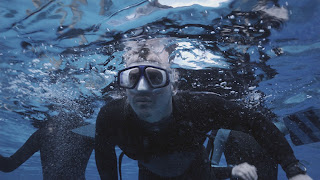 - Predictable at times. It's not THE REEF's fault that it ends up being a bit predictable. By the way of its storytelling, we know which characters are going to survive longer than others. In that sense, I sort of rooted for certain characters over others, knowing that since they weren't getting the spotlight and would end up being shark food. Not to say this takes anything away from the film, but I tend to like my things a bit unpredictable. Other shark films, like JAWS and DEEP BLUE SEA have these type of unpredictable moments that make those films entertaining. I know this was based on a true story, but I wish it would have evenly complimented all the characters so we would never be sure who would live and who would die. Instead, it played out exactly like I knew it would. 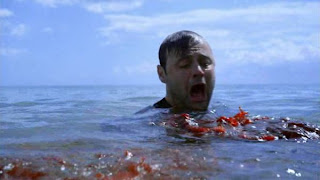 THE REEF is a great killer shark film that I actually like more than OPEN WATER or its sequel, ADRIFT. It has solid acting, great direction, and a simple, yet effective story that will keep you engaged. It's a tad predictable, but overall, it's a very effective shark film that proves that you don't need to give a shark an extra head or super-abilities in order to make the film entertaining. If you haven't yet, definitely check out THE REEF. It may make you nervous to step inside the ocean from now on.