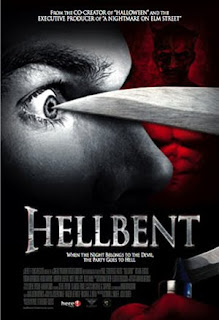 
I've seen a lot of slasher films, probably more than a normal human being should see. I've seen unstoppable killers. I've seen stupid characters who deserve to be mutilated. I've seen tough and interesting final girls. I've seen cool death sequences. And I've seen sex, drugs, and rock 'n' roll. But not once have I ever seen a slasher based around homosexual characters who participate and suffer in the same manner as their hereto counterparts.

That is, until I watched 2004's HELLBENT. Known as the first gay slasher film, I was expecting a David DeCoteau flick like BROTHERHOOD V: ALUMNI, where it's only point is to show male bodies half-naked to arouse gay and female viewers in place of something worth watching, like a decent story or something. I was pretty shocked that HELLBENT not only had these half-naked male bodies intact, but there was also a decent story, actual tension, okay acting, and pretty cool gore effects. Well stamp a rainbow on my ass - HELLBENT actually gets it right! Well...mostly anyway. 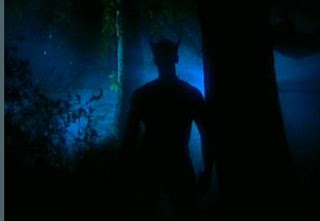 HELLBENT is a generic slasher through and through, but with a gay twist. That might turn A LOT of people off [yes, there are dudes kissing and getting naked - so you homophobes best watch something else], but if they manage to watch it with an open mind, it does right by the slasher formula. The story is thin, yes, but it doesn't insult the homosexual life of these characters and actually manages to become quite tense and fun to watch at times. It was produced by people who were behind the original HALLOWEEN and A NIGHTMARE ON ELM STREET, so you know it wouldn't be all that bad.

The story, like I mentioned, is pretty thin. What you read in the plot is basically it for HELLBENT. It has attractive leads. It has a mysterious killer. It has grisly deaths. It's typical slasher fare. Then again, most slashers don't have really deep screenplays because the story is never truly the focus - the kills and the T & A are. However, writer/director Paul Etheredge-Ouzts manages to create a believable portrait of homosexual characters who just happen to be involved in the world of a formulatic slasher.

Usually in horror films, homosexuals are characterized as feminine, helpless, and caricatures of actual human beings that are meant to be laughed at and made fun of. But HELLBENT doesn't do that at all, treating its characters as people first, with their sexual orientation just being what it is in the backstory. Etheredge-Ouzts takes his time building up the main characters, letting the viewer get to know these guys for a while before they end up dead. We get issues such as bisexuality, cross-dressing, and homophobia, but they never take over the film or become the center. The focus is really on these characters' friendship with each other and the feeling of loss when they start dying. These just help create a deeper movie than HELLBENT probably should have been, making it more interesting than most modern slashers. They're not stereotypical. They're not annoying. They're not over-the-top. These characters are just like characters in any above average slasher film. The only difference is that they happen to enjoy kissing and sleeping with men.

The character of the killer, however, isn't fleshed out at all - and 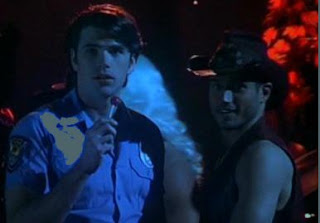 that's probably a good thing. It keeps him mysterious as to why he's targeting gay men. Does he hate gay people? Is he homosexual himself? We never really know his intentions. It actually reminded me of Michael Myers from HALLOWEEN, where we never knew why he murdered his older sister and targeted babysitters in his hometown fifteen years later [until the sequels, that is]. The mystery makes the character creepier. We're never really sure of his motives, making the killer more dangerous and intriguing.

The death scenes in HELLBENT are just okay, due to the low budget. All we really see is the killer decapitating victims with a hand scythe. Nothing really gory. Nothing we haven't seen before. It gets the job done I guess. The CGI was also evident, especially during the scenes where one of the main characters was missing his glass eye [which the killer actually licked out of his socket]. It wasn't distracting or anything, just noticeable.

The direction by Etheredge-Ouzts was pretty good. The pacing was quite nice, as the 83 minutes breezed by. The editing and lighting was a little off at times, but it won't ruin the enjoyment of HELLBENT unless you're a picky snob! And there was some showings of style, especially in the one scene where the killer murders a character inside the club. It's done under a strobelight effect, making the scene not only visually interesting, but it added tension that was needed for it to be effective. The man is no hack and while it's not the greatest direction I have ever seen, it does the job and maintains your attention. For a low budget feature [his debut, by the way], Etheredg 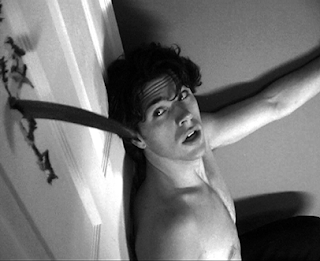 The acting was also okay. Dylan Fergus, Hank Harris, Andrew Levitas, and Matt Phillips all did a great job anchoring the film and making their characters pretty likeable. Levitas and Phillips, especially, were standouts, as they seemed to have a bit more charisma and interesting portrayals. And Bryan Kirkwood as bad boy Jake was also very good in the role, adding a bit of edge to the movie. All the actors in the film was straight and it was refreshing to see them take the gay roles seriously instead of hamming it up stereotypically. They all did a good job.

- Some dude holding balloons was looking for his boyfriend, George. This relationship probably won't work out. Bi-Curious George only has a thing for men with yellow hats.

- "Who would want to suck a green dick?" Um, Betty Ross would like to answer that... 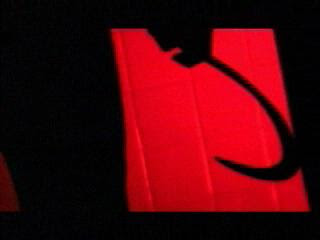 HELLBENT doesn't break new ground or change the rules, but it's a decent watch if you have 83 minutes to spare. The acting is competent, the direction is pretty good, and the characters are likeable and watchable. If a gay-themed horror film isn't your thing, then by all means skip HELLBENT. But if you're open-minded and willing to watch a slasher that does the usual things with a bit of a twist, then HELLBENT is worth the time.