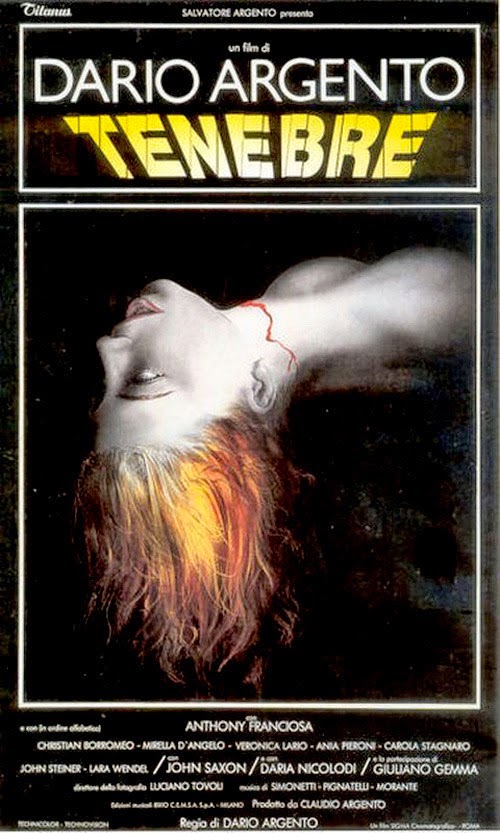 
When it comes to Italian Horror, Dario Argento is the first filmmaker that comes to mind. It was through Argento that I learned what a giallo was, which led me to other films of his - as well as films made by other Italian directors such as Mario Bava and Lucio Fulci. While Argento's most recent fare haven't been so well received - I personally think 1987's OPERA was his last great work - Argento's filmography still manages to make him one of the premier artists in the genre.

Dario Argento really made his mark on audiences through his giallos. Films like THE BIRD WITH THE CRYSTAL PLUMAGE, FOUR FLIES ON GREY VELVET, and DEEP RED really captured audiences, as well as help inspire the American version of the giallo, the slasher film. For a while though, Argento was more focused on supernatural stories, such as SUSPIRIA and its sister-film, INFERNO. But 1982's TENEBRE was Argento's return to the giallo sub-genre, proving to many why he was the master of these certain types of films. Personally, it's not as good as DEEP RED or SUSPIRIA. But it's definitely top 5 material for sure.

PLOT
Peter Neal (Anthony Franciosa) is an American novelist who is known for his controversially sensationalistic stories that have been criticized for their misogyny and violence towards women. He arrives in Rome for a press tour, but his arrival sparks murders within the city that seem to be copying scenes from Peter's latest book, "Tenebre". Peter becomes involved when he starts receiving notes from the killer, taunting him and using his own words against him. Who can the killer be? Is it someone Peter knows? Is it an obsessed fan? 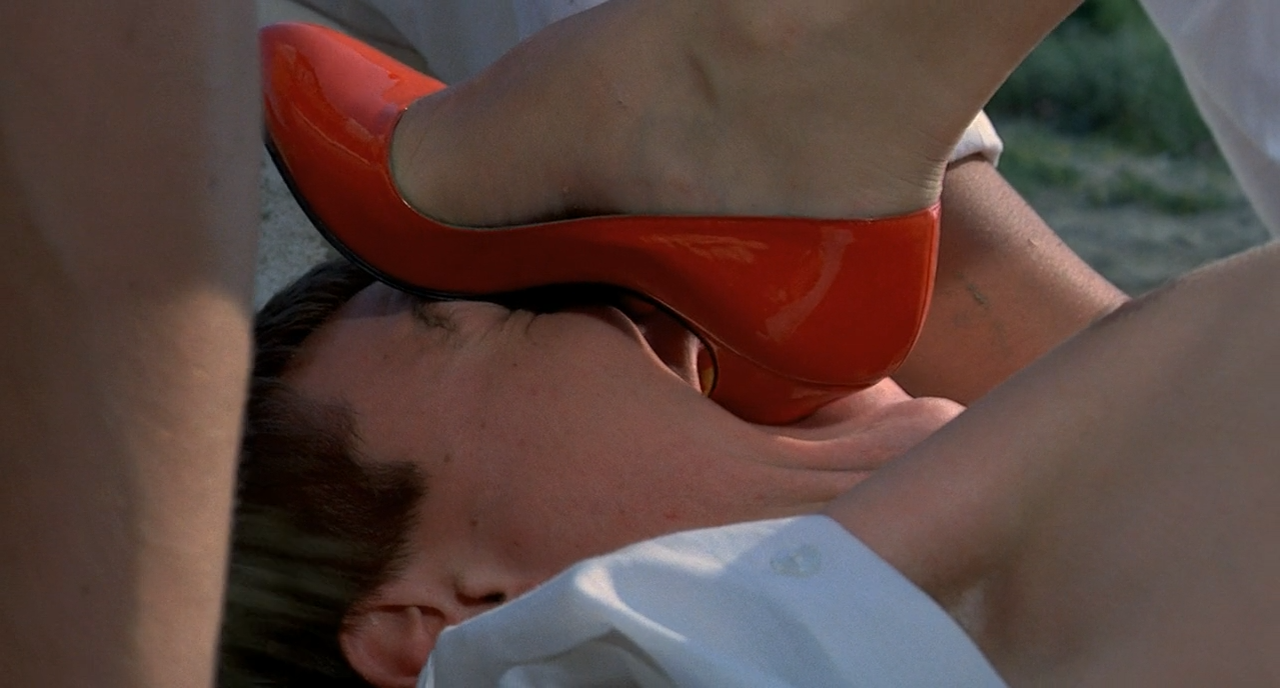 REVIEW
TENEBRE is an interesting film in Dario Argento's filmography. For one, TENEBRE was inspired by a stalker who had harassed Argento once he found fame in Italy. Also, it also seems to express criticisms towards Argento's previous works, especially where it concerns supposed misogyny towards women. The Peter Neal character seems to be TENEBRE's representation of its director - a man who just simply wants to entertain, but seems to be blamed for things he didn't intentionally do. These themes drive the story forward, showing that works of art are there to entertain most, but possibly inspire others to do bad things due to their minds not being able to wrap around reality. 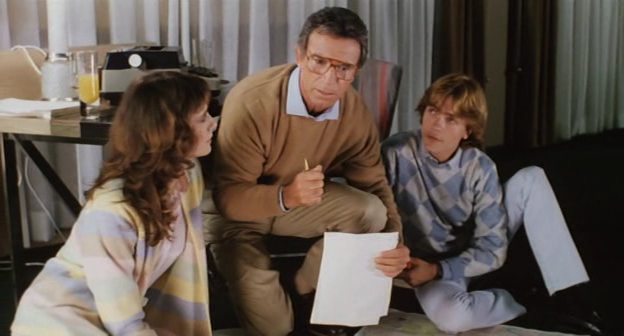 Also, TENEBRE seems different from Argento's other gialli in the sense that the narrative is much more coherent than anything that has come before it. The murder mystery is pretty straight forward, leading to a logical conclusion that makes sense once you realize what's going on. I like how Argento attempts to make any character in TENEBRE seem like the killer. They all have something pretty shady about them - some more than others - making you wonder who's a red herring and who is the copycat killer. The story just builds and builds until you're aching to see where it'll end up, and it does not disappoint. I liked how the main characters seemed intelligent when it came to the situation, with some of them acting pretty suspicious about the whole murder deal. With ex-wives, cheating scandals, and other shady stuff going on, you're never sure where the narrative is going to take you, which makes TENEBRE a lot of fun to watch while you're putting the jigsaw puzzle together. 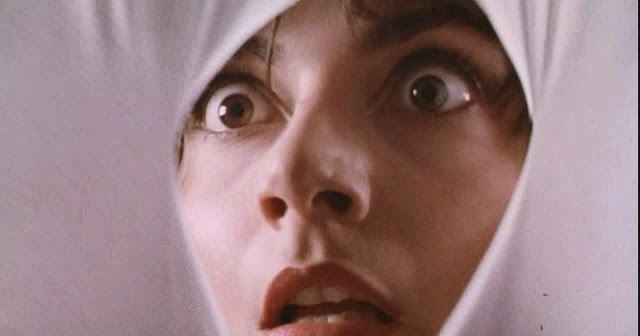 The puzzle is more interesting due to random scenes involving a flashback of a young, beautiful woman in a white dress wearing red pumps. It's obviously from the viewpoint of the killer, but we don't know what this means until the final act. The scenes just come across as surreal and pretty creepy, as you're just left wondering what the hell is going on. Who is this woman and how does she figure into things? And why is she shoving a red heel into a dude's mouth? Pretty strange stuff. 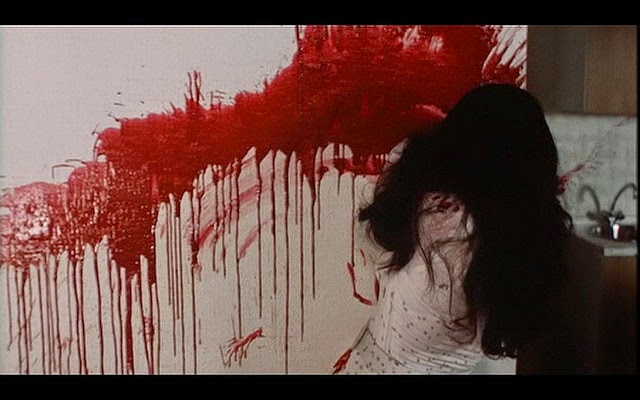 I do feel that the mystery aspect did hinder some of the characterization. Sometimes it's hard to like any of these people because Argento attempts to make each one of them seem suspicious. Also, I felt there were too many characters in the film, taking away the focus from the more major players. It's as if Argento attempted the body count aspect of the slasher film [which was major during this time], while attempting to maintain the aspects of a true giallo. I get what Argento was going for, but I do think it brings TENEBRE down a bit. 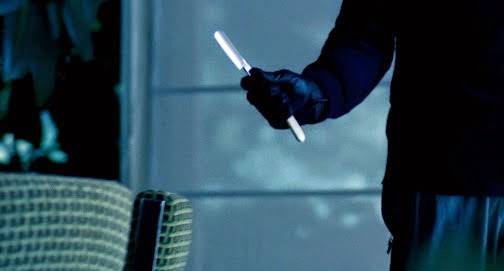 The death sequences in TENEBRE are quite memorable, and pretty bloody. The killer either likes to slice people with a blade, axe them to death, or even strangle them in a car from behind. There are a lot of cool death scenes, including one where an axe amputates a character's arm, gushing blood all over the nearby white walls, as the axe impales into her torso for added effect. We also get a great scene involving a dog attacking a character, leading her towards the home of the killer, who decides to make her night quite horrific as she struggles for help. Probably none of the sequences match up to anything from DEEP RED, SUSPIRIA, or even OPERA. But they're very effective and well done.

The direction by Argento is just fantastic. He injects a lot of style into the film. One scene, probably my favorite, involves this really elaborate crane shot that pans and tilts an entire apartment building in one continuous shot, just to set up a classic murder sequence. Apparently doing this caused a lot of headaches during production, but the final result is so worth it. We get some great POV shots from the killer's perspective. There's a lot of attention to detail thanks for cinematographer, Luciano Tovoli, making us pay close mind to any hints that may linger for us to solve the mystery. The tension and suspense is top notch. I do miss the colorful look that Argento is mainly known for, but it probably wouldn't have fit in well with the film's story and tone. TENEBRE is one of Argento's finest achievements as a filmmaker - one I'm sure he's definitely proud of.

The acting is hard to rate since I watched the English dubbed version of the film. Some actors, like Anthony Franciosa and Daria Nicolodi, come across as hammy due to the voice actors. But that's part of the charm, and they both are good actors, so I can't say anything bad about their performances. I really liked Giuliano Gemma as Detective Germani. He just came across as one cool customer, and pretty intelligent as well. We also get a bunch of hot women who are there to be murder victims, and they all run and scream quite well. And John "The Man" Saxon is awesome as the sleazy book agent. Any film he's in is worth watching, in my opinion. 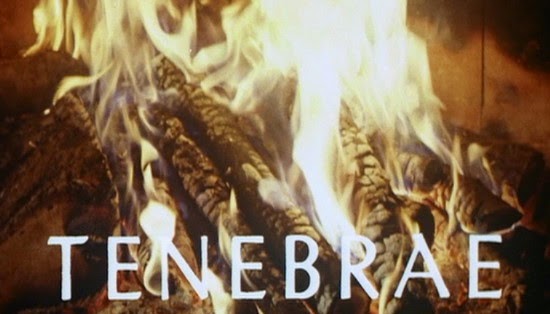 And I can't end this review without talking about TENEBRE's score. Argento is well known for collaborating with electronic rock group, Goblin, on many of his features during the 1970s. Unfortunately by the time TENEBRE was being produced, Goblin had disbanded. But Argento still managed to get three of the members - Massimo Morante, Claudio Simonetti, and Fabio Pignatelli - to contribute a synth score that would drive the narrative forward towards its tense conclusion. I personally love Goblin, and even parts of the group still manage to make great music. It's not as good as SUSPIRIA or DEEP RED, but the score does fit within the tone of TENEBRE. 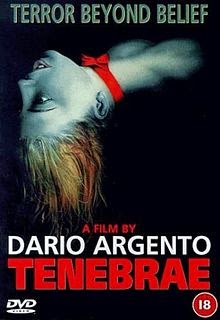 THE FINAL HOWL
While DEEP RED and SUSPIRIA are still my favorite Dario Argento films, TENEBRE is definitely up there for me as well. It's not a perfect film, but it's still manages to be an entertaining thriller that will keep you invested from beginning to end. I think technical wise, TENEBRE is one of Argento's best, although I do miss the more colorful look of his previous works. If you care about perfect storytelling, then TENEBRE will probably disappoint you. But if you prefer more of a visual experience with good amounts of gore and stylish filmmaking, then TENEBRE is right up your alley.