The WTF? Worst Films Extravaganza Presents: I Still Know What You Did Last Summer (1998) 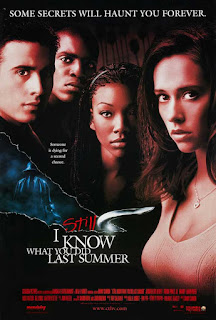 
After a rough few years in the early-to-mid 1990s, the horror genre [more specifically the slasher sub-genre] was revived massively after the sudden success of Wes Craven’s SCREAM in late 1996. Because of teen audiences and mainstream horror fans loving the self-referential treatment that Craven provided in his nu-slasher movie, studios saw dollar signs and wanted to capitalize on the success. Fans came in droves to watch:

And the most popular one of all - four fresh-faced teenagers trying to survive a fisherman with a hook for a weapon after they had accidentally run him over during the Fourth of July.

1997’s I KNOW WHAT YOU DID LAST SUMMER [a loose adaptation of the Lois Duncan 1973 novel] was the first considered, and probably most successful, Scream rip-off. With a $17 million budget, the film made $125.2 million at the box office - promising the start of film careers for Jennifer Love Hewitt, Sarah Michelle Gellar, Ryan Phillippe, and Freddy Prinze Jr. that never really came to be [although all four would be pretty successful on television]. With this level of success, it was inevitable a sequel would be produced to ride the post-SCREAM wave.

Rushed into production a year later to capitalize on the nu-slasher popularity, 1998’s I STILL KNOW WHAT YOU DID LAST SUMMER [ISKWYDLS for the rest of this review for my own sanity] was released with twice the budget, but less the box office [$84 million] of the first. It brought back Jennifer Love Hewitt and Freddie Prinze Jr. [who were extremely popular by this point], as well as bringing in a R&B/hip-hop star in Brandy Norwood to bring in a more urban audience [like the HALLOWEEN series and THE FACULTY would also do at the time]. It received negative reviews, but still manages to maintain a cult following after almost twenty years.

Which brings the question: Is ISKWYDLS a misunderstood slasher sequel? Or does it deserve the negative reception? In my opinion, the answer is very clear.

PLOT
Two years after the horrific accident that changed many lives, Julie James (Jennifer Love Hewitt) is trying to continue her college life even though she’s suffering from terrible nightmares about the fisherman killer (Muse Watson) that murdered her friends the year prior. Her relationship with Ray (Freddie Prinze, Jr.) is struggling because she doesn’t want to return home, as well as Ray being slightly jealous with Julie’s friendship with Will (Matthew Settle). Dealing with high levels of stress, Julie’s friend Karla (Brandy Norwood) tries to hook Julie and Will up - thinking it will help her woes. When Karla wins a free trip on a radio station to the Bahamas, she invites both Julie and Will - as well as her boyfriend Tyrell (Mekhi Phifer) - along to forget their troubles.

As Julie arrives to the islands and starts loosening up and having fun, she starts seeing signs that the fisherman may still be stalking her - not realizing that Ray already had a dangerous encounter with him that left him in the hospital for a while. Things get worse when a massive storm hits the Bahamas, trapping the group as people disappear one-by-one. As Julie and her friends realize the fisherman is on the island extracting some revenge, an injured Ray does everything in his power to arrive at the island to save Julie.

A lot of things here don’t make sense. For one, the whole “winning a trip to the Bahamas from a radio contest” is meant for Julie to take a vacation with her friends there so the fisherman could trap them and have his way with them. But the call isn’t even for Julie. It’s for her best friend Karla, who answers the question for the win [even though she gets the answer wrong]. The killer could have assumed Karla would invite Julie to the island, but what if she decided not to go? What would he had done then? Would he still go after Julie? Would he wait another year to concoct another idiotic plan to gain his revenge? Why not just kill Julie and Ray if he wants them dead so badly? Why make a elaborate plan that could have backfired on him? It’s dumb.

Speaking of dumb, whenever the fisherman had Julie in his sights, he’d just scare her rather than kill her. The worst part is when he traps her in a tanning bed [which Julie has no problem doing after finding a dead body in her closet] with a zip tie, but doesn’t try to stab her or injure her in any way. The game is two years old. It’s time to play, fisherman. The other characters are even dumber, as they struggle trying to get Julie out of the bed by using barbells and other objects - when they probably could have just unplugged the damn thing.

Speaking of the characters, they’re pretty unlikable in this movie. We feel for Julie, as struggles with the nightmares of the fisherman haunting her. But for a girl who is supposedly traumatized, she enjoys wearing clothes that make her look like a sex-pot. Not that I’m complaining that all her clothes are a size too small to highlight her assets, but I doubt someone this scared would try to look this hot for whatever reason. Julie looking rough in the first film makes sense. What changed here? Karla, supposedly Julie’s best friend, also doesn’t mind trying to break up Julie and Ray’s relationship by pushing her towards their mutual friend Will, even though Julie has made it more than clear she’s against the idea. Yeah, I can trust this person! And Will goes along with this as well. I can trust him to home wreck my relationship, yeah! Tyrell makes fun of Julie’s trauma every chance he gets, which makes him a huge jerk. The other side characters are also unlikable, except for Estes - who has a backstory that is never really given the depth it deserves. Honestly, the only likable people here is Ray. And he’s barely in the film really. The characters had depth and likability in the first film. What happened?

And why is the fisherman still wearing a slicker? You’re on a tropical island, for frack’s sake. Wear shorts and a colorful shirt, you Debbie Downer. Seriously, Julie knows who you are and what you look like. Just blend in with the rest of the tourists and kill her. Not too hard.

And then there’s the twist in the final act. Boy… wasn’t that clever? If you pay attention to people’s names, you’ll catch the twist right away. But just the idea of this character existing and manipulating their way into Julie’s world for an entire year is pretty farfetched. I guess I shouldn’t be too upset about it, since it at least shows the screenwriter tried to do something clever here. But it just makes me roll my eyes every time the reveal happens. Some revenge plot…

Sometimes a sequel shouldn’t be made, which I STILL KNOW WHAT YOU DID LAST SUMMER proves. It’s stupid and way too long for its own good, relying on cheap scares and plot holes to capitalize on the nu-slasher craze at the time. And while ISKWYDLS is a bad film, it’s not bad enough to consider it one of the worst horror films of all time. The acting and kill moments are decent, and you get Jennifer Love Hewitt wearing body hugging clothing that help keep your eyes on the screen. If you want an intelligent slasher film, there’s nothing to see here. No one needs to still know what any of these characters did last summer.

Or technically two summers ago.

Why is this film not just called I KNOW WHAT YOU DID 2 SUMMERS AGO?

Email ThisBlogThis!Share to TwitterShare to FacebookShare to Pinterest
Labels: 1 Howl, 90s, horror, I Know What You Did Last Summer, sequel, WTF? Vault