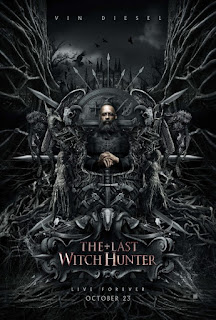 PLOT (from IMDB)
The modern world holds many secrets, but the most astounding secret of all is that witches still live amongst us; vicious supernatural creatures intent on unleashing the Black Death upon the world. Armies of witch hunters battled the unnatural enemy across the globe for centuries, including Kaulder (Vin Diesel), a valiant warrior who managed to slay the all-powerful Queen Witch (Julie Engelbrecht), decimating her followers in the process. In the moments right before her death, the Queen curses Kaulder with her own immortality, forever separating him from his beloved wife and daughter in the afterlife. Today Kaulder is the only one of his kind remaining, and has spent centuries hunting down rogue witches, all the while yearning for his long-lost loved ones. However, unbeknownst to Kaulder, the Queen Witch is resurrected and seeks revenge on her killer causing an epic battle that will determine the survival of the human race. 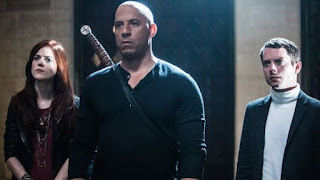 You’d think a film where badass Vin Diesel battles witches would be awesome, if not at least fun, right? Unfortunately if you’ve watched 2015’s THE LAST WITCH HUNTER, you’d know the idea sounds cool on paper but the execution leaves a whole lot to be desired. It’s disappointing because I’m a sucker for any Diesel vehicle, but this film didn’t do much for me to be honest. If I wanted to watch the same story that THE LAST WITCH HUNTER tries to tell, I’d rather watch CONSTANTINE, VAN HELSING, BLADE, or any other film that tells a similar story in a more entertaining way regardless of their respective quality. For a film about hunting witches, it sure had no idea how to put me under its spell.

The best thing about THE LAST WITCH HUNTER and the only reason it was made to begin with is Vin Diesel himself. Diesel has a really interesting personality in which his muscular frame contradicts with how big of a nerd he is. Even though he can probably handle himself well in a physical fight, Vin Diesel seems more at ease playing "Dungeons & Dragons" or watching some sci-fi show like Star Trek. I think it’s really cool to see himself embrace his geekdom, making him relatable as a fan of these types of films. His character of Kaulder is actually based on a character he created while playing Dungeons & Dragons when he was younger, which in turn helped bring this film to life. Out of all the actors in the film, Diesel feels the most comfortable with everything, playing himself as a tortured man who hunts and kills evil sorcerers as an act of vengeance. His character is the only one that feels fleshed out in any way, making us care about him somewhat and giving us a reason to understand his actions along the way. The probably is that the film seems to be based on an idea of this Kaulder character without really knowing how to interestingly create a world for him to live in. It’s a cool idea on paper and Diesel is obviously game for it all, but it doesn’t matter if we don’t give much attention to everything else that’s happening around him.

It doesn’t help that the script isn’t all that inventive. Or creative. Or even silly enough for us to have fun with. THE LAST WITCH HUNTER takes its dumb concept too seriously and never lets the actors and their characters enjoy themselves along this adventure. The first half of the film is at least coherent, as we’re given an interesting mystery that allows the film to introduce characters and world-building elements to flesh out a universe in which Kaulder and company exist in. But the last half just meanders into a boring mess of a film that’s too focused on creating relationships for characters that never earn them, or plot twists that we see coming a mile away but don’t really matter at the end because they’re never given enough attention for us to care. There's a lot of potential going on here, but it's never fully realized whatsoever. It’s obvious with all the jammed-in subplots going on in the film, the producers wanted THE LAST WITCH HUNTER to begin a new franchise for Diesel. But studios have seemed to have forgotten that franchises are earned, not forced upon us because Marvel hit a major jackpot with their MCU success over time. Instead of trying to set up things for possible future movies, focus on a single-film narrative that would be good enough for audiences to want more. And judging by the lackluster success of this film, I think everyone involved probably realized that the hard way.

The direction by Breck Eisner, who also made the not-so-great SAHARA and a good remake in THE CRAZIES, is just there. It visually never feels innovative or passionate, instead feeling like Eisner was hired by a studio to film this in their vision rather than his own. The pacing is off at times, with the action scenes and the slower moments never flowing right. In fact, a lot of the middle portion of the film that involves Diesel and friends going around town to find out answers to the film’s mystery can feel downright dull in terms of its presentation. The action scenes are okay, but unfortunately are edited with quick shots and close ups that never allow us to feel thrilled by what we’re watching. The CGI is a mixed bag as well. Some characters, like the Witch Queen and the monstrous Sentinels look pretty damn good. But the rest of the effects look like a cartoon, taking me out of the film when they appear. It almost makes me wonder where the budget went if this is the best they can do with special effects.

The acting is just there as well. Vin Diesel plays himself, only as a witch hunter this time around. Since it’s based on a character he created, Diesel is totally into his role and made me wish he was in a better written film to really make it work. Rose Leslie as Chloe is cute and actually helps give THE LAST WITCH HUNTER some much needed personality whenever she appears. But she has a two-dimensional role that never really goes anywhere. Michael Caine came for a paycheck, but at least he seems in on the joke. I wish Caine was in the film more because he shared some nice chemistry with Diesel. Their banter was quite fun. Elijah Wood tried to make his role of Dolan 37 work, but he felt out of place for me. It didn’t help that he didn’t do much in the film besides look surprised or confused until the end. He’s usually reliable, but he didn’t seem all that invested here. And Julie Engelbrecht was a pretty bland villain, but she tried to act menacing. Meh.

THE LAST WITCH HUNTER is the epitome of an action-horror film that has a cool character idea, but never knows how to form an investing universe around it to execute the narrative properly. Vin Diesel is the only real redeeming part of this film, as he’s playing a character that’s probably close to his heart and is totally passionate about. But with a messy narrative that’s more focused on building a franchise rather than telling us a good standalone story, characters that aren’t fleshed out enough for us to care, visuals that are a mixed bag and actors who don’t get much to do because the script doesn’t allow it, THE LAST WITCH HUNTER is a disappointing and dull failure for the most part. There’s nothing bewitching about this one.