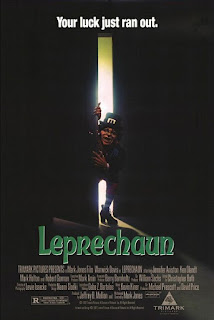 PLOT (from IMDB)
When Dan O’Grady (Shay Duffin) returns to the U.S. after stealing some Irish leprechaun’s (Warwick Davis) pot of gold, he thinks he can settle down and enjoy his newfound wealth. He thought wrong. The leprechaun followed him and O’Grady barely gets away with his life, having locked the little monster in his basement.

Ten years later, J.D. (John Sanderford) and his spoiled daughter Tory (Jennifer Aniston) move in. By accident, the leprechaun is released and almost immediately the annoying creature starts to look for his gold, not displaying any respect for human life. 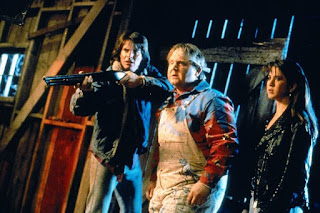 As any horror fan knows, holidays are always an easy theme to craft a scary story around. HALLOWEEN, BLACK CHRISTMAS and MY BLOODY VALENTINE are perfect examples of that. Not even St. Patrick’s Day is safe, which explains the existence for 1993’s LEPRECHAUN - an attempt to create a franchise horror character for a popular day on the calendar like MGM & Universal had done for Chucky with CHILD’S PLAY. LEPRECHAUN is a film I don’t watch all that often, but I’ll probably leave it on in the background if it plays on television. It amazes how many sequels this film has gotten, but people love this dumb Leprechaun and his silly puns. LEPRECHAUN is a bad movie through and through, but it has an odd charm about it that makes it worth watching at least once - especially around St. Patrick’s Day.

The main issue with LEPRECHAUN is that it doesn’t have much of a narrative. The film is just about a vengeful Leprechaun looking for his stolen pot of gold due to some stupid and annoying humans, leading to some violent times - sort of anyway. I don’t mind horror films having a real simple story. Hell, some of the classics could be summarized in one sentence. But what those had over this film are characters we could actually like or care about. It’s obvious from the start that the producers want the audience to love and root for the Leprechaun character. He has the mission. He has the funny dialogue. He has the most interesting things to do in the story. He’s the star from beginning to end. In fact, the first shot of the film is the Leprechaun descending stairs to check on his gold without any sort of set up or explanation. He’s the character the franchise is going to be build around, so why wouldn’t he be the focus? The problem is that the Leprechaun is supposed to be the antagonist, yet he’s justified in his actions because greedy humans stole what belonged to him and he just wants what owed to him. If the supposed protagonists were as interesting or as charismatic as the title character, the simplicity wouldn’t be an issue. But most of them are annoying and unlikable, while others are just there to add to the low body count. You’ll want the Leprechaun to play tricks and hurt these people, which could be fun. But the film plays that aspect a bit safe as well, making one wonder what’s the point. It’s just a strangely written screenplay.

It doesn’t help that you’re not sure what kind of tone this film is supposed to take. It’s obviously a horror film because this Leprechaun is enjoying tricking and killing some folks. But there’s also this goofy, silly vibe that doesn’t totally succeed because the film isn’t all that funny anyway - at least not intentionally. The Leprechaun is obviously inspired by later Freddy Krueger, using jokes and puns while he’s hurting other to amuse the audience. Some of the lines are genuinely chuckle worthy, while most of them deserve a tomato or two being thrown at them. But at least these kind of jokes and puns fit for a Leprechaun character, regardless of how well they work. But that doesn’t excuse the human characters from having really terrible dialogue that makes you roll your eyes and groan more than anything. Each character thankfully has a personality, but that doesn’t make them watchable when they’re alone in scenes together. Tory is a brat who preaches others about being vegan and not having the luxuries of living on a farm rather than the city. Ozzie is the slow one, while his annoying kid sidekick Alex is seriously grating anytime he speaks. And Nathan is just the token good-looking hero that doesn’t have a clue what he’s doing. Seriously, none of these characters would be missed if the Leprechaun had gotten them. 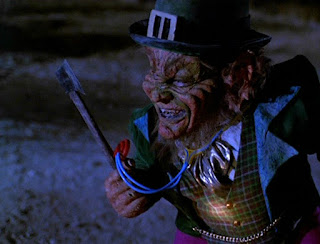 The story does have a few things going for it. For one, I actually like the fact that a four-leaf clover is his weakness like a crucifix would be for a vampire. This Leprechaun enjoys giving people a sense of bad luck, so having the symbol of good luck destroy him makes sense. And the concept is never overused here, making it more effective during the film’s conclusion when it’s utilized. I also really got a kick of the Leprechaun having this OCD deal with shining shoes. There’s one moment where the humans throw their shoes at the Leprechaun, realizing he’s compelled to shine their shoes regardless of how dirty they are. It’s honestly amusing and displays one of the better moments for the human characters. I also thought some of the death scenes were unique. The main one that fans remember involves the Leprechaun using a pogo stick to impale some shop owner until he died. There’s also one that involves clawing a deputy’s face before snapping his neck. And seeing the Leprechaun’s go-kart actually ram and turn over a normal sized automobile is pretty funny. So while the majority of the screenplay leaves a lot to be desired, it does have memorable moments from time to time.

The direction by Mark Jones isn’t the most exciting honestly. We get a lot of tilt and pan, especially when most of it isn’t necessary. And his use of both slow and fast motion at times didn’t really feel like they fit the scenes they were a part of. At least the film is well paced, even though it really should have had more action within the middle portion of the film. And the blu-ray remaster makes the film look really great, probably more than it deserves. I also thought the gore effects looked pretty good as well. While also a terrible movie, I do think Jones did a better job on RUMPELSTILTSKIN, where he was able to cut a bit more loose notwithstanding the quality of that movie. LEPRECHAUN looks fine but nothing that’ll pop out for the audience. 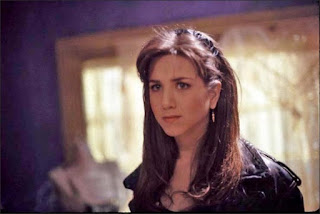 As for the acting, it’s not the greatest either. But some of the actors do try to elevate a silly script. For those who don’t know, LEPRECHAUN is the film debut of one Jennifer Aniston, who would become a phenomenon a year later by starring on Friends. A lot of people consider Aniston’s performance in this film “the period before she took acting lessons”. And yeah, she can pretty rough around the edges at times as Tory, the city brat who soon becomes the heroine of the film. But honestly, I rather take her shaky performance here over any performance she had during and post-Friends, which is pretty much one-note and the same every time. Despite her annoying character, Aniston handles herself well and manages to take it as serious as she can, considering the material. I doubt she even discusses this film anymore, but she happens to be one of the better things about it.

Even better is Warwick Davis as the Leprechaun, who made all the films in the franchise that he was involved with watchable with his energetic performance. Davis has been a highlight in a lot of the projects he’s been involved in, especially multiple STAR WARS films, WILLOW, and several HARRY POTTER movies. Even though it shouldn’t work, Davis makes the Leprechaun character charming and fun in a dumb way, You can Davis is having so much playing the role, which makes it charming to watch him portray it. This series would be nothing without him and it surprised me when he was replaced in recent installments of the franchise.

The other actors are okay. Ken Olandt uses his 90’s hair, chiseled looks and biceps do the work for him. Hey, when it works, it works. Mark Holton played the typical slow overweight redneck in a horror movie role. It feels more like a caricature than an actual performance, to be honest. I wish he had played it more subtle, but then I remembered what film I’m reviewing here. Robert Hy Gorman is pretty grating, but I chuckle whenever a child says a cuss word every now and then. I’ve seen worst child actors. And John Sanderford doesn’t get to do a whole lot but get his hand bitten by the Leprechaun. He was more memorable as Zack Morris’ dad on Saved by the Bell. 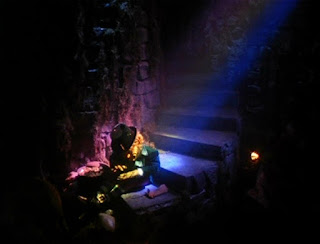 While this film has its fans, I find 1993’s LEPRECHAUN just meh for the most part. Warwick Davis is the highlight as the title character, having a blast in the role and making the silly gimmick work as best as possible. And while a bit rough around the edges, I would take this version of Jennifer Aniston [in her film debut] over the Friends Jennifer Aniston we’ve gotten in the last 26 years. The kills, especially the pogo stick kill, is pretty amusing. And while the puns and jokes don’t always land, at least the film seems to be trying to entertain the audience. But besides the Leprechaun, the human characters are either stupid, annoying, or both - which is more disappointing when the body count is so low. And the direction is pretty pedestrian and not all that memorable, even though the blu ray remaster looks freakin’ great. LEPRECHAUN doesn’t really succeed as either a horror film or a comedy, but there’s something stupidly charming about this one for some reason. I would only recommend this film for Bad Movie Nights or you need something to watch for St. Patrick’s Day. Otherwise, not the pot of gold you’re probably looking for.