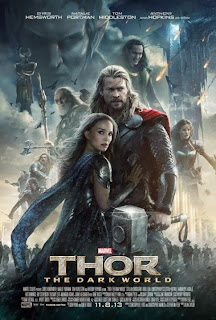 After his fight with The Avengers to stop Loki from destroying New York City and all of Earth, Thor has now returned to Asgard where he has been fighting to keep the nine realms of the universe as safe as possible. But, an ancient evil elf known as Malekith has began his mission to bring the entire universe into an eternal darkness. Meanwhile, Jane Foster and Darcy discover a portal between Earth and another dimension, which causes Jane to get infected with an ancient power in which Malekith wants back in order to complete his mission to bring the worlds back to the darkness that they used to be all those centuries ago. This prompts Thor to return to Earth and bring Jane to Asgard to find a way to get the powers out of her. Since his father Odin won't help him, Thor turns to the man who betrayed him and his family, his brother Loki. On their quest, Thor, Jane, Loki, and Thor's friends must find a way to stop Malekith from destroying this universe for good.

Thor: The Dark World is a straight up science fiction/fantasy epic that is a total blast. While I loved the first film, my one complaint was not getting enough Asgard and exploring what's out there. This sequel gave me that. Sure, The Avengers is still my favorite Marvel Studios film, but Thor: The Dark World has probably become my 2nd favorite with the original Thor flying thunderously right behind it. While the film does have its dark and more serious moments for sure, it is downright hilarious. Most of the humor came from Loki, who I just adored here. But, also the direction they took Dr. Erik Selvig after the events of The Avengers had be rolling. That's another thing I love about Phase Two is the aftermath of what happened in New York. Everybody has been dealing with it in a different way. Tony Stark has anxiety attacks. Thor, Odin, Sif, and basically everybody has severe anger towards Loki and rightfully so, but it is done mostly in a humorous way. And the way Dr. Selvig deals with what happened in Avengers is probably the most hilarious thing I've seen in a Marvel movie. I was just laughing it up with this guy and so was the rest of the audience. We also get to see Loki really embrace his mischief side with his powers to distort visuals and the guy is just having fun with it especially when he makes himself look like an iconic character from the Marvel world. I just love this character and was happy to see him back, even though he wasn't played as the villain of the film.

While Jane Foster is not the best "love interest" in the MCU (that one goes to Pepper Potts in the Iron Man films!), I do like the character. Darcy actually had me laughing this time around, and didn't kinda annoy me like she sorta did in the first film. I also liked her boyfriend who's an intern. I loved seeing Sif back and kicking ass. It's obvious that she has the hots for Thor, even though his eyes are on Jane. Seeing this babe sword fight and just kick a lot of ass was very nice. I do feel that Loki was the better villain than Malekith, but he did okay for the most part. And of course the two end credits scenes were good especially the mid credits sequence, which will tie into a future Marvel Studios film.

The direction by Alan Taylor was breathtaking. I love the look of this film just as much as the first. But, where the first film took place more on Earth, Thor: The Dark World really went beyond Earth and Asgard. Just great orgasms for the retinas.

The cast was really solid. Chris Hemsworth is the superheroic God of Thunder as Thor. This dude just has tons of charisma and is just a cool dude. Tom Hiddleston, my favorite Marvel Studios villain as Loki but here we got to see other sides to the character other than hate and jealousy. Anthony Hopkins still rocks as Odin, King of Asgard. Jaimie Alexander is that strong warrior princess of Themys um Asgard as Sif. Stellan Skarsgard was delightfully hilarious as Dr. Selvig. Oh and look for Stan Lee's cameo, it's his 2nd best behind The Amazing Spider-Man. Kat Dennings was okay as Darcy, much more fun than she was for me in the first movie. And Christopher Eccleston was decent as Malekith, even though he didn't get a whole lot to do.

Overall, Thor: The Dark World is a great time in the superhero/comic book brethren of movies. It's a smidge better than Thor, and flies directly behind The Avengers with Thor right behind it. It's hilarious, fun, action packed, sad/tragic, and is a booming rollercoaster ride of funsauce so go see it or Loki will sneak into your house and turn you into his ultimate flying monkey!