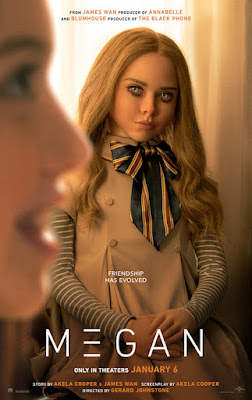 A brilliant toy company roboticist uses artificial intelligence to develop M3GAN, a life-like doll programmed to emotionally bond with her newly orphaned niece. But when the doll’s programming works too well, she becomes overprotective of her new friend with terrifying results. 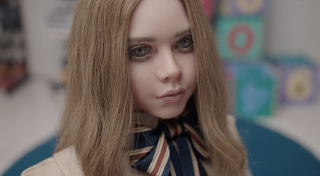 In 1963, The Twilight Zone aired an episode called “Living Doll”, introducing the world to Talking Tina - a doll that would be revealed as some sort of sentient evil being. Due to that episode’s massive popularity, the killer doll subgenre of horror has continued to thrive and please audiences until the modern day. Whether it’s voodoo [TRILOGY OF TERROR, CHILD’S PLAY], magic [MAGIC, PUPPET MASTER] or just the advent of technology [2019’s CHILD’S PLAY remake], dolls continue to frighten audiences despite many of us own one during our childhood as a security blanket of sorts.

Like I mentioned already, technology has really been the element that keeps this subgenre going. It’s not hard to see why. Many of us rely on technological things to keep us up to date with world events, our friends’ and family’s lives, and just to keep us from being bored with the doldrums of modern life. Especially for Gen Z, technology is a lifeline because they don’t know a life before iPhones, tablets, computers and advanced game consoles to keep them occupied. Adding this kind of technology to a doll that’s meant to be more human than robot is always going to return a narrative that won’t be without its hiccups.

M3GAN, or Model 3 Generative Android, is the killer doll for the Z Generation. It behaves like a human being. It can dance for you. It can sing your favorite TikTok song. It’ll even listen and give you advice to make you a better person. But like with all Artificial Intelligence, it’s only going to want to learn as it evolves itself. And knowledge is power - which can be a bad thing depending on who is gaining it. And because of this, the android becomes more intelligent and clever than the human being who programmed it. And as we’ve seen in other bits of media, chaos and destruction can only follow.

M3GAN is marketed as the film’s villain. But is she really? After all, she’s just doing what she was created to do. Yes, the doll does some really bad things - mainly murder due to having a serious attachment to the young girl she’s paired with. But if she isn’t programmed to stop learning and to not do bad things that can hurt others, is she really the one to blame? After all, M3GAN doesn’t have a conscience or emotions that would imply sympathy and empathy. Only the humans behind this android have that capacity.

In my opinion, the film’s villain is really Allison Williams’ Gemma. I mean, she’s not doing it intentionally. She’s a career oriented woman who is surrounded by technology that she has created as a means to keep her company and make her financially capable of living a great life. Unfortunately, her sister and her sister’s husband were murdered in a car accident, quickly making her the guardian of her niece Cady. Both characters are out of their element here. Gemma has no idea how to raise anyone, hoping to leave that to M3GAN or any other toy to keep Cady occupied while she lives her own professional life. Cady is still mourning the death of her parents and having to adjust to a new life. She only connects with M3GAN because it’s a toy that gives her the attention she needs, which leads to attachment issues by the third act.

Gemma isn’t a greedy or bad intentioned character. But in a way, she’s just as robotic as M3GAN. She’s mourning her own loss and has issues adjusting to change because these are things she can’t control with the push of a button. It’s her lack of wanting to connect with Cady that leads to the birth of M3GAN, which not only becomes a media sensation and a great bonus for her bank account and reputation as a toy maker, but begins the drama that plays throughout the movie. M3GAN doesn’t have a conscience, but Gemma does. It’s her flaws that become M3GAN’s flaws, watching her good intentions go down the drain. But thankfully it’s humanity that gives both Gemma and Cady a fighting chance against this malicious android.

It’s obvious M3GAN is about how parents are using technology to babysit their children in order to continue their individual lives, whether that’s professionally or personally. This isn’t something new. Parents have been doing this for decades, ever since the birth of television. We’ve all spent hours a day distracted by television or video games while our parents went to work or were doing chores around the house. But with phones and tablets, we’re now seeing three and four-year-olds looking like zombies, brainwashed by what they’re doing on these tools. They’re not getting that same human interaction and connection us older generations received, more focused on living in a virtual world rather than reality. While technology is great, children deserve to be raised and supported by their parents and/or family in real life rather than learn everything from what they see online. This will probably do more harm than good for future generations in the long run, but only time will tell.

What I’m really trying to say is that M3GAN has a smart script, thanks to MALIGNANT writer Akela Cooper. She could have really turned this film super hokey and cheesy with the whole killer doll deal. But there’s more to M3GAN than just the horror aspect, which allowed me to connect with it more. Being a fan of both these James Wan produced movies, Akela Cooper is proving to be an interesting player in the horror scene. Look forward to what she has up her sleeve next. 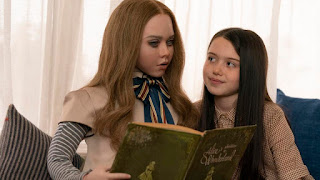 The direction from Gerald Johnstone is really good, making M3GAN seem legit creepy and menacing as she evolves throughout the film. While the film can be tense and chilling at times, M3GAN feels mostly lighter than that - almost like a comedy at times that pokes fun at advertisements, social media and how society treats others without thinking first. The colors pop and the most slasher film moments are shot super well, with a lot of build and suspense that gets you ready for whatever M3GAN has in its violent programming. And while this version of M3GAN is PG-13 [I hear there’s an R-rated cut floating around], the death scenes still manage to pack quite a punch. For a film that only cost $12 million to make, M3GAN is shot to look way more expensive than that.

All the actors rock in this movie. Allison Williams is really great as Gemma, as you understand her character’s flaws and really feel her varied display of emotions throughout the film when bad things start to go down. Williams is a super underrated actress and I hope she continues to shine brighter in future films. Violet McGraw is also great as Cady, acting beyond her years as a sympathetic young character who just wants to feel normal and loved again after a tragedy. McGraw also gets a lot of emotional beats to play with, all of them convincing and justified for her character. And both Amie Donald and Jenna Davis are fantastic as M3GAN. Donald, a young dancer, really captures an android’s movements down. The dancing is strange. The way M3GAN hunts is uncomfortable to watch. And her lack of moving tends to be scarier a lot of the time. Donald is awesome in the role. And Jenna Davis’ cute voice adds a lot to the character as well. Special mention also goes to the supporting actors - in particular Ronny Chieng as Gemma’s boss David and Lori Dungey as neighbor Celia - who bring a lot to their roles and help flesh out the main characters. Just a really great cast for a fun movie. 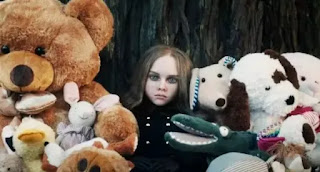 I never would have guessed that M3GAN would be as fun as it is, considering I thought the trailers made the movie look pretty cheesy and that January is usually Hollywood’s dumping ground for films they have no faith in. But it’s a really good time with a relevant commentary on technology and how some adults use it to babysit their children to the point it could be damaging in terms of a lack of human interaction. It also plays around with the killer toy tropes extremely well, proving that no matter what decade it is, talking and moving dolls will continue to creep us out. The direction by Gerald Johnstone is strong, maintaining a lighthearted tone even with the film’s horrific moments. The film also looks more expensive than its $12 million budget would have you believe. The cast is super solid as well, with Allison Williams and Violet McGraw as the aunt and niece who are the center of M3GAN’s terror. Amie Donald and Jenna Davis also get a lot of love as M3GAN’s body double and voice respectively. If M3GAN is any indication, 2023 might be a fun year for movies if this is how the year is starting.