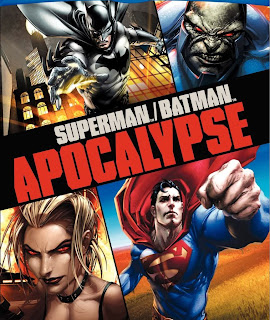 
PLOT
In Gotham City, a spaceship crashes into the city's harbor. Batman (Kevin Conroy) swims into the harbor, finding a green meteor rock. Eventually, he comes into contact with the passenger - a blonde, teenage Kryptonian (Summer Glau) who has the same exact powers [maybe a bit stronger] than Superman. Superman (Tim Daly) comes to help out, halting this stranger when he shows her how similar they are. He learns that she is Kara, his cousin from Krypton. Feeling responsible for 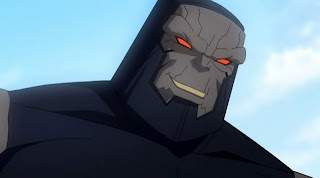 her, Superman decides to take Kara under his wing to Batman's dismay and disapproval. When Kara's powers begin destroy the things around her, due to lack of discipline, Wonder Woman (Susan Eisenberg) and her Amazons step in and decide to train her.

Meanwhile, the evil Darkseid (Andre Braugher) sees Kara as an opportunity to destroy Superman once and for all. He kidnaps Kara, brainwashing her into his slave. Superman, Batman, and Wonder Woman must travel to Apokolips to save Kara and stop Darkseid from succeeding in his diabolical plan.

HITS
- The action sequences. Probably the best part of SUPERMAN/BATMAN: APOCALYPSE are the fight scenes between our heroes and the array of villains that pop up. There are a few of them in this film, but some are better than others. The ones I enjoyed were - Batman, Superman, Wonder Woman, and the Amazons against the Doomsday clones on Themyscira, and the battle on Kent Farm between Superman, Supergirl against Darkseid. Every fight is choreographed well and are quite exciting to watch. The film lacks in many aspects, but the action isn't one of them.

- Most of the voice acting. Not everyone works here, but the majority of the acting is very good. Kevin Conroy can voice Batman in his 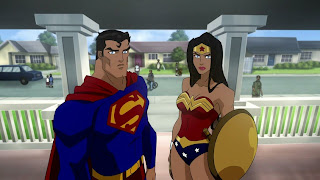 sleep at this point, even though he sounds a bit tired [or bored] here. But it still works. Tim Daly still rocks as Superman. Susan Eisenberg is very cool as Wonder Woman. Summer Glau does a good job as Supergirl, even though I prefer Nicholle Tom's voice from the animated series. And Ed Asner as Granny Goodness was a bit odd, since he's a man and she's a woman. But I found it funny in a strange way, so I didn't mind it.

- Most of the direction. Lauren Montgomery does an okay job with the film. It's far from perfect, but the fight scenes are visualized well and the animation [with an attempt to look similar to Michael Turner's illustrations from the comic book story SUPERMAN/BATMAN: APOCALYPSE is based on - "The Supergirl From Krypton"] look fine. She uses the frame to her advantage, making up for the convoluted story with some exciting visuals - especially during the fight sequences. It's a nice looking film, so I can't say too much was wrong with how it was directed, at least appearance wise.


MISSES
- The story. Now I didn't read this comic book arc, or see SUPERMAN/BATMAN: PUBLIC ENEMIES [which this film is somewhat a sequel to, but not really]. But I do know that it was probably difficult to cram 6 issues into 78 minutes [including opening and end credits]. This becomes a major problem because there's just too much going on here. Is it all bad? Not at all. I enjoyed some of the narrative. But it becomes overwhelming, as well as lacking, at the same time. How is that possible?

Kara's introduction is done well for the most part, as it ties her to both Superman and Batman. But then, Wonder Woman appears for no real reason but to be there. She blames Kara for destroying a park in Metropolis, but it was because Wonder Woman pretty much attacked her to get that reaction out of her. Couldn't she had just approached Superman about her dangerous potential instead of battling her? For a diplomatic character, it makes no sense!

Anyway, we're introduced to the Amazons. Then Darkseid wants Kara to destroy Superman. Then we have Doomsday clones. Then we have Big Barda. And it just continues. No room to breathe. No depth at all as to the situation. How does Darkseid brainwash Kara so easily? Never explained. Why does Batman, Krypto, and Wonder Woman hate Kara so much without getting to know her deal? This just leads to constant arguing that feels like bickering parents trying to decide how to deal with a troubled child, rather than adults trying to control a potentially dangerous situation. It doesn't help that Kara comes across as a brat who wants to fit in and be accepted [which isn't explored enough either]. It feels like I'm watching an outline of a screenplay rather than the final draft of one. The ideas are there, but they're never fleshed out.

I feel as if this film didn't do enough, yet did too 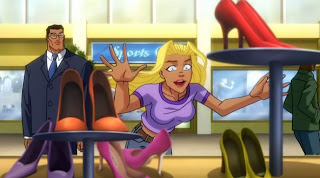 much at the same time. It felt short, yet long, and that's an odd thing to comprehend. This would have worked better as a mini-series of films, or if certain characters were taken out to make it less convoluted. I hear it's very close to what the comic books presented, but I don't think it works as a film - at least in the way it was presented here.

- Andre Braugher. Now I think Mr. Braugher is a fine actor. He's done some great work both on the small and the big screen. But as Darkseid, he's just flat as a board. His voice is just too normal and too calm for the character. When I think of Darkseid, I expect to hear menace and terror. This guy is practically a God. He can kick Superman's ass pretty easily. He should sound like a monster wanting his next snack, not a regular guy strolling through the park. It's a shame Michael Ironside wasn't available to reprise the role, like he did on the Superman: The Animated Series. He was a great Darkseid. Braugher is nowhere close to that. I don't know who to blame for this - Braugher for not giving it his all, or the producers for not finding a better actor or altering the voice a bit. It's a shame because Darkseid is a great villain and he is visually here. But sound design wise, it's a total fail.

- Who is this film aimed to? Non-fans shouldn't bother, since they'll never know what's going on and why these characters are behaving in ways they shouldn't be. Comic book fans might be disappointed, as the title is misleading. Even though the title implies this is a Superman and Batman film, the focus is really on Supergirl - a character that honestly doesn't do much for me unless she's a supporting character or has a really strong arc. This film doesn't have that. Male audiences are going to be turned off by a terrible shopping montage scene [really???] and Supergirl acting like a spoiled brat. I feel this film is catered more to a teen female audience, yet I'm not sure many women would take the time to watch this. I'm not saying there aren't female comic book fans, because there are - probably more than one thinks. But men are the majority of the success of these films, and besides the action sequences, there's not much a male audience would want to invest themselves in. Superman and Batman are supporting players in their own film. So who really is the demographic for this? 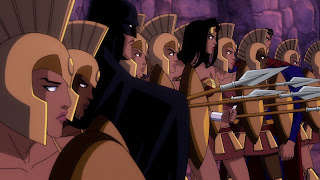 is a pretty disappointing animated feature that had a ton of potential. I hear the film was very similar to the comic book arc that it was adapted from, which makes me wonder whether the film was too short for a 6 issue story, or if the story was even worth telling in a film at all. The story could be better. Darkseid was voiced by the wrong actor. And I'm not sure who exactly DC and Warner Brothers want to watch this movie. At least the fight sequences are cool, the other voice actors are good, and the direction is solid for the most part. A pretty average film that I probably wouldn't watch again.