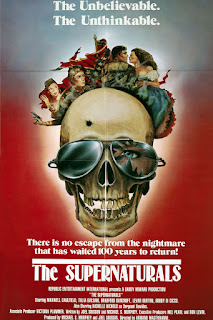 Nichelle Nichols is an army sergeant who leads her platoon into the woods of the deep south on a training exercise. Unfortunately, it is the site where a bunch of yankee soldiers murdered a town of confederates. The corpses of the dead soldiers rise up to wreak revenge. 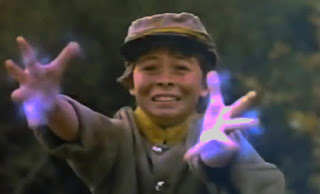 With such an interesting cast of well-known actors, you’d expect 1986’s THE SUPERNATURALS to be more talked about in horror circles. But after watching it, I see why this zombie film has been pretty much forgotten - it’s a pretty dull affair that doesn’t get close to decent until it’s too late in the film’s run time. And having a military zombie film a year after DAY OF THE DEAD just shows how uninspired and lazy THE SUPERNATURALS unfortunately is.

THE SUPERNATURALS starts off well, with a prologue of Union soldiers capturing Confederates during the American Civil War. The Union plans on executing them, including a young boy named Jeremy who is wearing a Confederate uniform pretending to be a soldier. The thing is that Jeremy apparently has supernatural powers which involve reviving the dead and creating special energy around people to protect them. I found this all interesting because it was a refreshing way to explain why there are zombie soldiers later on without having to resort to the typical “government or military experimentation” trope most zombie films fall under. Plus, allowing a child to be a puppet master for the undead gives the film a TWO THOUSAND MANIACS! vibe that I can get into.

Unfortunately, most of the film is during the present day where we get a new group of soldiers who are more annoying than interesting. I mean, the film never really tells the audience how long this platoon has been together. This is important because they act like frat boys who prefer taking dares and goofing on each other rather than taking their roles seriously. Some of these soldiers seem more focused on getting laid, especially with the sole female soldier Angela. In fact, one of these soldiers [Cort] tries to force himself on Angela inside her tent while drunk - to which she responds with a blade to his genital region. That makes Angela more likable than most, but still… Why should I root for any of these people? 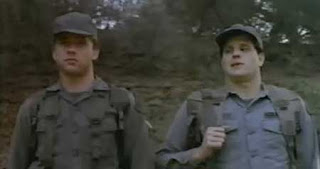 The only other characters of real note are Ellis, a handsome soldier who seems to be connected to the events of the past. Melanie, Jeremy’s mom, lurks around the area mesmerized by Ellis’ presence - and vice-versa - making you wonder whether he’s a reincarnation of Jeremy, a descendent, or someone else entirely. The answer is kind of lame, but at least there’s a level of intrigue presented. The best character is probably Sergeant Hawkins, a hard-nosed and domineering soldier who takes no crap from her platoon and tries to set them straight as much as she can. She’s likable because she’s one of the few people in this film that has a personality and feels the same disappointed way about her soldiers as I’m sure most of the audience will.

As for the zombies themselves, they’re alright. But I’m not sure what they are exactly. Were they raised from the dead out of their graves? Are they demonic ghosts wanting revenge for what happened in the past? What is exactly Jeremy’s power and how is he still alive for over 100 years? And why does his mother look the same while he and the zombies look much older? And how are these zombie ghosts setting up Civil War traps and still managing to show their military training like nothing has changed without the present day soldiers realizing it? If you’re expecting this film to answer these questions, you’ll be waiting for a long time.

Honestly, there’s not much with the narrative that one would expect with that cool poster and interesting premise. There’s not a whole lot of character development. The action is kept to the first ten minutes and the final act, as the rest of the runtime involves the soldiers goofing off and exploring the area where the soldiers execution took place. It doesn’t help that DAY OF THE DEAD was released the year prior and did the military zombie narrative 100x better. 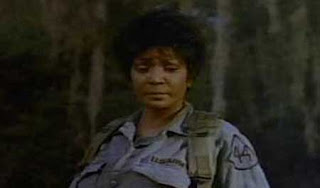 Armand Mastroianni, probably best known for directing the 1980 slasher HE KNOWS YOU’RE ALONE, does an okay job with the material. While the scenes with the soldiers [not involving zombies] drags more than it should, the zombie scenes are well paced and edited to hide the TV movie budget the film has to offer. There’s a lot of mist and a nice use of blue lights to create a moody atmosphere, even though the film isn’t close to being scary. Mastroianni doesn’t show the zombies in full view all that often, but they do look pretty okay considering the budget. And the death scenes are nothing really graphic, besides a cool looking ripped throat scene near the end. Other than that, the film isn’t all that stylish and the presentation isn’t all that memorable to be honest. But the direction does what it needs to do, I guess.

The acting is probably the best part of THE SUPERNATURALS. Maxwell Caulfield does alright as Ellis, the soldier who seems to have a connection with the past storyline. Even though he gets first billing, he doesn’t get a whole lot to do besides stare, look confused and finally be the hero at the end of the film. Talia Balsam does what she can with the role of Angela, bringing some sympathy to a token role. Bobby Di Cicco played a good annoying drunk and misogynist as Cort. And THE SUPERNATURALS may be best known for having two Star Trek alumni from different shows acting together in the same movie. Scott Jacoby had some nice heroic moments but wasn’t given much to do. Nichelle Nichols is probably the best actor here as Hawkins, playing a convincing drill sergeant with sass and attitude that made her endearing. Given the lousy material, Nichols makes the most of it and comes out of it looking cool. As for LeVar Burton, he’s pretty much wasted in this film by being given nothing to do of note. That’s pretty strange considering he was popular even before starring on Star Trek: The Next Generation or hosting Reading Rainbow, due to his role on the 70s miniseries ROOTS. And Maurice Gibb of the Bee Gees has a cameo. It was very odd seeing him. Good cast that needed better material to really stand out. 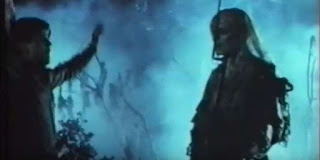 THE SUPERNATURALS is a mostly dull and disappointing zombie ghost movie that’s probably still remembered due to its interesting cast of actors. While the supernatural and zombie aspects are worth watching and investing in, the rest of the film following unlikable and silly characters walking around and pulling pranks on each other drags to the point where you just want the undead to show up and have their way with them. Also, it’s never really explained if these are actual zombies or just ghosts who look dead - as well as why certain characters look younger when they should be older due to the film’s timeline. The direction by Armand Mastroianni is nothing special, but he sometimes captures some mood and atmosphere with a nice use of fog and blue lighting that keeps the zombies in the shadows. The zombie make up looks pretty good, considering the film’s low budget. And the actors are fine, in particular Nichelle Nichols of Star Trek fame as a sassy army sergeant. But some of them, in particular LeVar Burton [another Star Trek alumni], doesn’t get a whole lot to do and feels wasted. If you need to see a military film involving zombies, I’d stick with DAY OF THE DEAD or even 2018’s OVERLORD. Otherwise, it’s totally natural to skip this non-super movie.