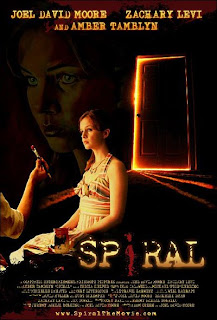 
PLOT - Mason (Joel David Moore) is a quiet, antisocial telemarketer who's asthmatic, loves jazz music, and is a masterful painter by night. He also seems to have bad luck with the ladies he sketches. Mason's only friend is his office manager, Berkeley (Zachary Levi), who's known him for a long time. Berkeley is a not-so-subtle sexist and womanizer, yet is quite devoted to Mason and will do anything to help him.

Mason's world changes with the arrival of Amber (Amber Tamblyn) during one of their lunch breaks. Amber's interest in Mason's art and his awkwardness begins a friendship that breaks Mason somewhat out of his shell. But as the relationship progresses and Amber gets deeper into Mason's world, Mason's secrets begin to be revealed - which may not be good for anyone involved.


STORY - SPIRAL, even though it involves certain cast members from Green's 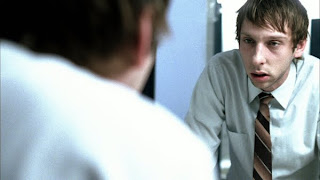 breakout film HATCHET, is not a horror film. It's more like a character study in a psychological drama/thriller that just happens to be sometimes violent and bloody. It's really the complete opposite of HATCHET where the story moves slow in order for the audience to empathize with the main characters and see how and why they behave the way they do and what makes them tick.

And that's why SPIRAL really works - the three-dimensional characters. While there are a few people in the film, it's really a three character film. Mason's awkwardness and lack of social skills stem from a terrible childhood involving his parents, scared that he'll repeat his father's mistakes. He could be a stereotypical recluse, but Mason is a lot more than that. He's a telemarketer who's always late to work, even when he lives two-and-a-half blocks away. His passion is buying jazz records and listening to them as he sketches and paints women he's drawn to. But we know there's something wrong with Mason, as he constantly has nightmares about a certain waitress. He also wakes up with blood on his hands, convincing him that he's murdered these women once his secret has been revealed. Mason is a really complex character, yet the way he's written and even portrayed makes him easy to decipher and understand.

Mason's friendship with Berkeley tends to be a strange, yet realistic, one. The two really have nothing in common on the surface. Unlike Mason, Berkeley is a ladies' man - a sexist player who sleeps around with his female co-workers, not believing in settling down and is very confident about who he is and what he does. But in a way, Berkeley is also as anti-social as Mason. Mason is able to connect with people outside of the physical sense, which he does with Amber. Berkeley, even though he's physically intimate with women, doesn't [or can't] connect with people other than that. The only one he connects with on a broader scale is Mason, as if the two are Yin and Yang. The two are really best friends [almost like brothers], as Berkeley knows a lot of Mason's secrets, yet keeps them quiet and defends him to the end when others have bad words to say about him. The way they interact with each other is realistic, which makes the ending that much more powerful when the twist to the story is revealed.

As for Amber, we wonder why she's so attracted to Mason. Mason isn't the greatest looking guy. Mason doesn't have the most appealing personality or social skills. He's also a man who keeps his secrets, which would make anyone very suspicious. But Amber sticks by Mason's side, almost to the point of being needy and clingy. We don't know much about her past to really see why she would behave this way. In a lot of ways, she's more of a mystery than Mason is because we know more about him than her. This plays into the final act, which I kind of saw coming until the twist, but it's interesting to figure out why this cute girl with a charming personality would want to attach herself to someone who is the complete opposite.

SPIRAL is also a very dialogue heavy film, but it enhances the film and makes what happens towards the end more effective. The interaction in the film is mainly between Mason and Amber, which is quite good, as we watch both of their characters slowly change until everythi 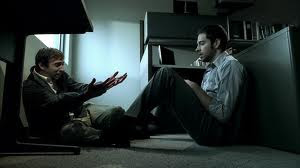 ng falls apart. Even the stuff with Berkeley is compelling. The screenplay is very subtle, yet quite powerful.

DIRECTION - Adam Green and Joel David Moore direct a great film here, that feels almost Hitchcockian in a lot of ways. Moore had written SPIRAL originally as a short film with co-writer Jeremy Danial Boreing, but wanted Green to be part of the project due to their relationship working together on HATCHET as well as Moore having to be in front of the camera for much of the film. This allowed Moore to focus on the arcs of the characters while Green took care of the visual aspect. For a low budget production, SPIRAL looks anything but. It has a lot of atmosphere that's actually quite downbeat and depressing. It's cloudy for most of the film - a lot of scenes involve rain - and it doesn't offer anything optimistic at all. Even when Mason and Amber are enjoying each other's company, the mood around them tells us it won't end well. In a lot of ways, the setting [this was filmed in Portland, Oregon] and tone of the film represents Mason's character and state of mind. This is no more evident when Mason goes through several emotional episodes, where the camera begins shaking all over the place. There is also great framing and composition, especially when it comes to Mason's bathroom door - which is the brightest room in the entire film, but seems to be the one area where Mason is afraid of stepping into as if something horrible has happened in there. It creates suspense and curiosity as to what lies behind that door. It's just a very well shot film that displays style when the film needs it, but really focuses on the characters in order to let them tell the story. I think this may be Green's best work behind the lens.

EDGE FACTOR - SPIRAL is a pretty tame film for the most part. No one gets naked [the closest is Amber Tamblyn's back] and the language is what you'd usually hear in a PG-13 horror film. The violence is also tame, even though there are moments where confrontations become quite tense. This isn't really a film for blood and guts, letting the story be edgy in other places.

ACTING - Joel David Moore does a solid job as Mason. While he does do a bit of overacting at times, he's solid for the most part and is quite convincing as a creepy antisocial man. Moore gives Mason a sad and scary characteristic of an introverted individual who is so quiet that a single look makes him incredibly intimidating. Moore could have played the character Napoleon Dynamite-like, but Moore makes Mason realistic and quite unsettling - especially when there are people like this around us. Even though he's known for more comedic work, SPIRAL proves that Moore can handle drama as well. Amber Tamblyn is also quite good as Amber, creating a character who is the very opposite of Mason, balancing their scenes out quite perfectly. She seems like a normal girl - funny, charming, cute, and very outgoing - yet she's so obsessed with Mason. In a lot of ways, Amber is the perfect mate for Mason, giving exactly what he needs in his life. Tamblyn does well in creating almost an equal for Moore. Zachary Levi, who's probably best known as playing the title character on the show Chuck, is also quite good as Berkeley. He's pretty much a stereotype on paper, but Levi manages to flesh the character out by making him compassionate for Mason. SPIRAL has a very solid cast who truly deepen the script.

MUSIC - Some nice jazz music that set the tone and mood for much of the film. I dug it. 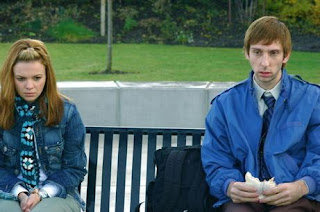 SPIRAL is a very solid film by up-and-coming filmmakers that deserves more than a cult audience. The story is interesting and well-written, the acting is great, and the direction is excellent. If you're into psychological thrillers/dramas, definitely check out SPIRAL if you haven't done so already. It's not for everyone, but if you give it a chance and be drawn into the story, you won't be disappointed. It's nice to see something intelligent and well-thought out for a change.