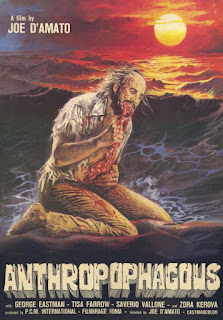 PLOT (from IMDB)
A group of tourists become stranded on an uninhabited island where they are stalked by an insane, violent and grotesque killer (George Eastman) that slaughtered the town’s former residents.

When it comes to the term “Video Nasty”, one of the first films that will quickly come to mind for those familiar with Video Nasties is 1980’s Joe D’Amato’s cult classic, ANTHROPOPHAGOUS. The word anthropophagous [of Greek origin] refers to someone who enjoys eating human flesh, which pretty much sums up the killer in this somewhat-slasher film that’s really a piece of Eurotrash on film that will divide horror audiences according to their tastes. While certain scenes in the film truly earn its inclusion in UK’s Video Nasty list of the 1980s, its reputation probably make the film better than it actually is. ANTHROPOPHAGOUS definitely has its moments, but it is sure a drag to get to them unfortunately.

Let’s get the good stuff out of the way first. ANTHROPOPHAGOUS is known for its gory sequences of murder and cannibalism. If you are into that sort of thing, this film is right up your alley! While I wish the film had a lot more of this stuff [believe me, the film really needed it], what we do get is memorable enough for many horror fans to still discuss it almost 40 years later, whether they’ve seen the entire film or not. I could only imagine what the film censors in both the United Kingdom and United States thought of those very scenes at the time of its release. They must have freaked watching a grown man in grotesque make-up ripping a womb out of a pregnant woman just to take a bite out of it in front of the father of that said baby inside of the womb. While the scene could have been more graphic if D’Amato and writer-actor George Eastman had wanted it to, just the very thought of seeing just a taste of it is disturbing enough. We also get a scene later at the end where the killer is cut open, to which he pulls out his own intestines and munches on them in front of the film’s surviving protagonists. In fact, the scene is made more notorious for being the actual film’s poster art! The rest of the gore is pretty standard in terms of slasher films and Italian giallo films in general. You get the typical stabbings. One person hangs themselves. And we get some nice throat chewing that look pretty realistic at the time. There are a lot of sick visuals in the film that will turn off some that don’t appreciate Italian horror, but the gore is without a doubt the best part of ANTHROPOPHAGOUS. 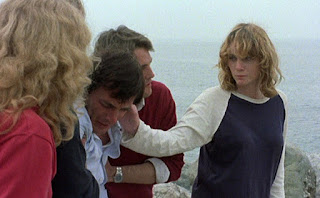 The acting isn’t the worst either, but nothing that really stands out. That being said, I watched the U.S. dubbed version and the voices range from good to laughingly bad. But out of everyone, George Eastman as our killer is really great whenever he appears. Eastman has a great presence in ANTHROPOPHAGOUS, as he’s super tall, wears gross make-up, and provides this creepy stare with his eyes that sort of gives you chills. He only has a few lines during a flashback, but he’s just silent otherwise. I have a feeling Eastman was somewhat inspired by HALLOWEEN’s Michael Myers in just the way he walks, moves and his portrayal as a force rather than a person. It’s a shame the killer only has a major role in the film’s final act, because having him do more throughout the film would have made ANTHROPOPHAGOUS less of a chore to watch. The only other actor of note is Tisa Farrow [Mia’s sister who appeared in 1979’s ZOMBIE]. For a main star, she unfortunately doesn’t really do a whole lot that’s memorable. This is Eastman’s show all the way.

The music score is good or bad, depending on which version of the film you watch. The original Italian version has music that’s so off-putting, it takes away from the visuals. It either sounds like it should belong in a circus, or is so bland that it adds nothing positive to the film to make it a stronger viewing experience. The US dubbed version may steal cues from TV episodes and the awesome KINGDOM OF THE SPIDERS, but at least the musical score fits in better with what’s going on the screen. The stalk scenes has musical cues that bring some tension to them, while the quieter moments has a nice score that tries to elevate these pedestrian scenes. If you cherish sound design, the U.S. version is definitely the way to go. 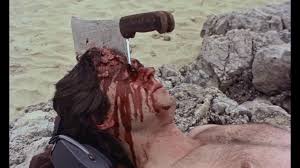 The direction by Joe D’Amato will probably only be appreciated by those who are familiar with his work. He doesn’t have a very stylish eye, directing scenes pretty standardly and without much flash or pizazz that could elevate the film’s storytelling. But he does manage to add a lot of atmosphere with the beautiful Grecian location and the great use of using Italy-as-Greece as the backdrop. The stalk-and-kill scenes, some with first person point-of-view, create mystery, suspense, and tension. And the gore effects are shot really well, as D’Amato never really overdoes it and just gives us enough of a taste to be disturbed and grossed out by a man eating a womb or his own guts. The pacing could be a lot better, but that final act is directed as well as one would expect out of an Italian horror film of its time. It’s not his best work as a director, but the visuals aren’t what bring this film down for me.

That problem lies within the script, which has some great elements sprinkled throughout but never cohesively works well enough to be interesting. The film starts off with a creepy moment of a vacationing couple getting murdered by our unseen killer. But then the film grinds to a halt as we meet our main characters, who honestly aren’t all that interesting or likable enough of anyone to really give a damn about them. They end up just talking and walking around for about 50 minutes, complaining about curses, dealing with one-sided love triangles and spouting expository dialogue that you’ll forget by the time the film ends. It’s not until the characters meet a blind girl who can sense the killer via smell of blood that the film starts to pick up. If this was a 40 minute film, ANTHROPOPHAGOUS would be awesome from beginning to end. The final act alone is worth watching this film, as it feels like a mean-spirited slasher film that’ll keep you engaged. But the first two-thirds of the film will test audiences not used to watching these kind of horror films, or want something with quick-paced action. They’ll probably give up halfway into the movie. It’s a shame because more kills in the middle, or just some well-written dialogue and eventful moments throughout the film would have added a great deal here. Instead, most people who haven’t seen this film will probably just watch the best parts of YouTube and forget about the rest. When the most interesting character in your film is the killer and he’s barely even in the film, you got yourself a problem. 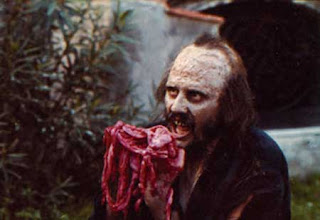 It’s easy to see why ANTHROPOPHAGOUS was listed as a “Video Nasty” almost four decades ago. The gore is pretty intense for the time, as watching a human being eat a womb out of a pregnant woman and then chew on his own intestines was probably more than some were ready to handle back in the day. It’s a shame the rest of the film is a mixed bag. While George Eastman’s performance as the killer is great and the final act is well directed by Joe D’Amato, it’s a struggle to get through the rest of the film with its slow, boring pace and forgettable characters who you won’t care whether they survive or not. ANTHROPOPHAGOUS is a film that ought to be better than it is due to its notoriety, but it’s kind of a chore to sit through for the most part. If you love Italian horror, early slasher films or films by Joe D’Amato, check it out if you haven’t already. If not, just find the bits of gore on YouTube to see what all the fuss is about.