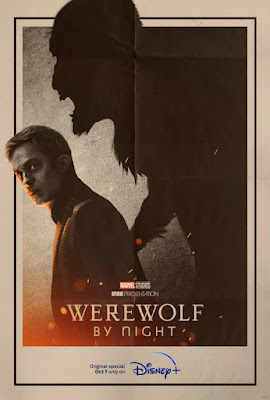 On a dark and somber night, a secret cabal of monster hunters emerge from the shadows and gather at the foreboding Bloodstone Temple following the death of their leader. In a strange and macabre memorial to the leader’s life, the attendees are thrust into a mysterious and deadly competition for a powerful relic—a hunt that will ultimately bring them face to face with a dangerous monster. 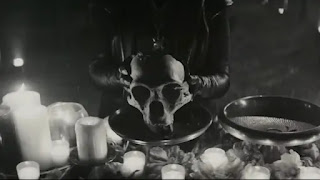 Phase Four of the Marvel Cinematic Universe has been a mixed bag with only a few highpoints compared to the previous three Phases. Thankfully it may be ending on a strong note this year, starting with the Disney+ special, WEREWOLF BY NIGHT - based on a 1972 comic that brought in horror elements to the Marvel Universe.

Composer Michael Giacchino proves that he’s also skilled as a horror director, as he puts the Jack Russell character in a setting that resembles a classic Universal flick from the 1930s and 1940s, complete with black & white filter and film grain that gives an illusion of age. With a narrative that resembles The Most Dangerous Game that deals with monster hunters trying to kill each other for a magical Bloodstone that can hurt monsters, it allows the audience to get to know the small cast of characters for a short period of time. Most of the supporting characters unfortunately get less screen time than others, but I enjoyed their different approaches to hunting. Thankfully, Jack and Elsa Bloodline are strongly written characters who share some nice chemistry throughout, strengthening the narrative.

Probably the biggest takeaway from WEREWOLF BY NIGHT is Marvel’s allowing more violence and gore in their projects. While I think May’s DOCTOR STRANGE IN THE MULTIVERSE OF MADNESS was probably more brutal, WEREWOLF BY NIGHT has its share of gore in terms of dismembered limbs, ears being bitten and pulled like Mike Tyson to Evander Holyfield and weapons impaling people. We also have Ted, a.k.a. Man-Thing, disintegrating a scared someone with just a single touch. 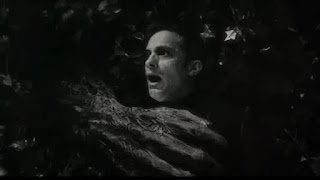 Giacchino’s direction is confident and great, as the film feels like a classic horror film in its approach. The fight choreography is awesome and the pacing is perfect for a special like this. I love that the only color we see for a long time is the red from the Bloodstone, while the mix of CGI and practical effects works really well - especially when it comes to an awesome looking Man-Thing [or “Ted”] and a cool looking Werewolf By Night. The werewolf isn’t the greatest looking werewolf, but I liked the mix of the Lon Chaney look with a mix of a modern edge. Plus, Giacchino’s musical score is pretty awesome too.

The actors are all solid. Gael Garcia Bernal is definitely a get for any studio and he’s wonderful as Jack Russell, bringing a likability and quiet charisma to his lead role. I definitely want to see more of him and his character going forward. Laura Donnelly was also solid as Elsa Bloodline, bringing a toughness and sassiness to her role. I also enjoyed Harriet Sansom Harris’ snooty and power-hungry role as Verussa Bloodline, Elsa’s stepmother and the leader of this hunt. And special mention to Carey Jones as “Ted”, a.k.a. Man-Thing. I really enjoyed his motion capture work that showed how lovable and innocent this supposed monster really is. He could be the next Groot if done right. 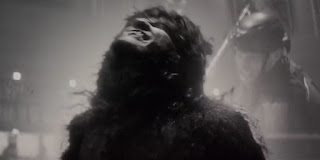 One of the highlights of the mixed bag known as the MCU’s Phase Four, director/composer Michael Giacchino’s WEREWOLF BY NIGHT is a great throwback to the classic horror of the 1930s, 1940s and 1950s mixed with modern technology to really stand out in the massive Marvel Cinematic Universe library. The use of black and white [with red being the only color used for much of this television special] with added film grain is a nice touch, while using the common narrative structure of The Most Dangerous Game with an added creature element allows some bit of depth and a simple character arc that’s more than digestible. The action is well shot, as well as some of the more horror elements that’s gory enough to satisfy genre fans. Due to a great mix of CGI and practical effects, both Werewolf by Night and, in particular, Man-Thing look pretty damn cool. The cast, especially Gael Garcia Bernal and Laura Donnelly, are likable and bring an earnestness to their roles. WEREWOLF BY NIGHT is a nice surprise this Halloween season and I look forward to more of this character in a live-action setting, as well as more horror themed Marvel characters getting their time to shine.