The Watchtower of Justice Looks At: Superman IV: The Quest For Peace (1987) 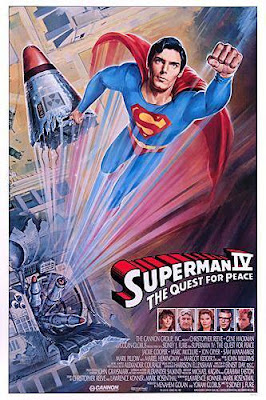 Even though it was met with poor reactions from most critics and audiences, Superman III still did okay at the box office back in summer 1983. So Warner Bros. decided to start developing Superman IV. During the development of Superman IV though, WB decided to make a spinoff film with Supergirl starring Helen Slater as Superman's cousin Kara Zor-El. Originally Christopher Reeve was going to co-star, but negotiations didn't work out. But, Marc McClure who played Jimmy Olsen in Superman The Movie, Superman II, and Superman III reprised his role in the spinoff movie. Supergirl was released in 1984 to poor box office results and people just didn't care for it. Though now it is considered a fun B-Movie by some. Superman IV had a lot going against it. For starters, WB was having trouble finding a director. Richard Lester was approached with him helming the theatrical cut of Superman II and directing Superman III, but schedules didn't work out. Warner Bros. went to Richard Donner, but he refused after being screwed out of Superman II. Even horror master Wes Craven was offered to direct with his work on another DC Comics character, Swamp Thing. Craven was interested but actor Christopher Reeve didn't like the idea of a horror filmmaker directing something light hearted such as Superman. So WB hired Sidney J. Furie to direct what would be titled Superman IV: The Quest For Peace. The production and post production went messy when the budget was cut and the film's length had to be cut down from 132 minutes to 90 minutes. Superman IV: The Quest For Peace was released to theaters in the summer of 1987 and bombed miserably at the box office. The film was panned by critics and audiences alike. The future plans for a fifth installment were shredded and actor Christopher Reeve never put on the costume or red cape again. This was the nail in the coffin for the Superman movie franchise and rightfully so.

Superman goes on a quest to stop nuclear weapons. Lex Luthor escapes from prison thanks to his stupid nephew Lenny and continues his plan to kill Superman. This time, Lex gets a strand of Superman's hair from a museum and sends it into the yellow son which creates a super powered clone known as Nuclear Man. Meanwhile, some high powered stock broker named David Warfield wants to buy out The Daily Planet and starts having false stories published about Superman. Warfield's spoiled daughter Lacy takes a liking to Clark, which kinda makes Lois a tad jealous. Nuclear Man starts some damage. Superman fights him. Superman gets sick from the radiation. Superman gets better and stops Luthor, nephew, and Nuclear Hercules and saves the day. Superman gives a speech about peace. The End.

After suffering internally and externally from witnessing Superman III, you'd think I'd be used to a little pain. While a smidge better than Superman III, Superman IV: The Quest For Peace is still a terrible mess but a less messy one if that is even remotely possible. At least the villain had a logical goal here. Lex Luthor, the greatest criminal mastermind of our time is back thank God. Too bad he is underplayed in favor of Nuclear Arnold who is not actually Arnold. Now ARNULD could have hammed this up to being a Hell of a lot more fun like he did with Mr. Freeze in Batman & Robin.  Anyway, I did happen to enjoy the opening titles sequence a Hell of a lot more here than in Superman III. I also liked that the movie was trimmed down to only 90 minutes, but it is a very long 90 minutes due to how tragic the film is. The most entertaining part was Superman and Clark Kent having to be at two places at once. Superman is supposed to be meeting with Lois while Clark has a date with Lacy Warfield. I thought it was fun seeing him go back and forth with these two women. I did like that we got more Lois since she basically only had a cameo in the last film. But, her and Superman just didn't have that spark that they had in Superman The Movie and Superman II. And somehow he took her flying with him and caused her to forget that she did. What the Hell?

Nuclear Man was just ridiculous. He was basically like a dull version of Hercules with a little bit of The Hulk thrown in. Lex too wasn't as fun as he was in the Donner films. And then we have Otis' replacement with Luthor's nephew Lenny. This guy just spoke in a surfer/stoner dude accent and had a terrible hair cut. Lacy was a somewhat interesting character, but her and Clark never really went anywhere so what's the point? It seemed like she was just a plot device to make Lois jealous.

The special FX were SUPER cheesy in this film. It felt like a Troma film without the Troma awesomeness. At least they used John Williams' classic musical score again. The fight on the moon between Superman and Nuclear Man was pretty humorous.  Clark also keeps hearing his mother's voice and seeing people from Krypton, which was very strange.

The acting in this film is all over the place. Christopher Reeve is still decent in his last portrayal as Superman/Clark Kent. It's a damn shame what would happen to Reeve in the coming years. Margot Kidder does okay in her last role as Lois Lane. Jackie Cooper and Marc McClure do well in their final roles as Perry White and Jimmy Olsen. Mariel Hemingway did okay as Lacy Warfield. Sam Wanamaker was okay as David Warfield. Mark Pillow was horrible as Nuclear Man. Jon Cryer who is most popular for playing Alan on Two and a Half Men and playing in several John Hughes movies is pretty terrible as Luthor's nephew Lenny. And what the Hell is up with his hair? Jeeze!  And Gene Hackman does what he can with his final depiction of Superman's arch enemy Lex Luthor.

The direction by Sidney J. Furie was terrible, yet better than Richard Lester's take at Superman III.