Midnight Confessions Episode 91: "The 3rd Annual Around the World: Part 3" 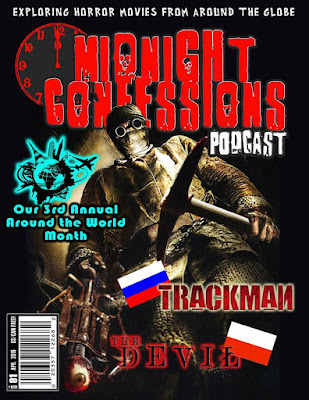 We get delirious with two Euro flicks; THE DEVIL (Poland/1972) and TRACKMAN (Russia/2007). Plus another exciting addition of "How Much of an American Are You?" These movies made us feel bad enough, the death of Chyna and Prince only added to the misery. Also, we end up acting our shoe size and not our age. Sorry, Prince.

We're now on Stitcher! - Stitcher Version
Posted by Fred [The Wolf] at 7:00 PM No comments:

Midnight Confessions Episode 90: "The 3rd Annual Around the World: Part 2" 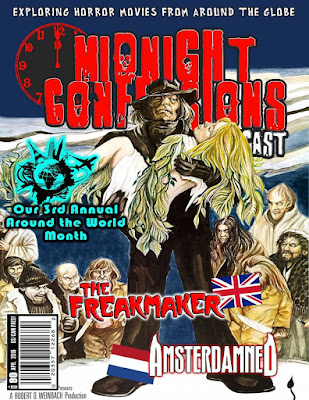 The 2nd week of our Around The World series brings us to the U.K. and the Netherlands, as we take a look at THE FREAKMAKER aka THE MUTATIONS (1974) and AMSTERDAMNED (1988). Plus another round of "How Much of an American Are You?"

We're now on Stitcher! - Stitcher Version
Posted by Fred [The Wolf] at 10:04 PM No comments: 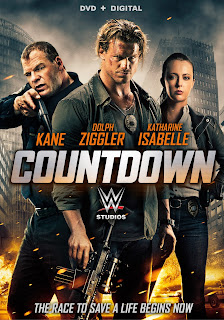 
*You can also find this review at That's Not Current*

For those who are subscribed to the WWE Network, there’s a program called Swerved that has WWE Superstars pulling pranks on each other. Think Punk’d with muscles. It’s a fun show, glad others are getting pranked and not me.

Unfortunately, WWE Studios wanted to change that and swerve all of us by releasing COUNTDOWN, their latest cop-thriller starring WWE Superstars and legitimate actors probably desperate for a paycheck. The trailer led me to believe that most of the film would take place during a WWE live event, having WWE Superstars interacting with other WWE Superstars playing police officers in a very surreal and meta way. Hell, Rusev pulls a gun on someone! Who wouldn’t want to see that film?

Well WWE Studios felt that audiences wouldn’t want to, giving us something more generic instead. Yes everyone - my name is Fred and I’ve been Swerved. Bastards…

PLOT
Ray Thompson (Dolph Ziggler) is an unhinged cop who is still haunted by the death of his child years back. While undercover, Ray busts a Russian gun runner (Alexander Kalugin) and his gang - not before shooting his partner (Josh Blacker) to prove himself. Because of this conduct, Ray is suspended for 30 days by Lt. Cronin (Glen “Kane” Jacobs).

The suspension doesn’t last long, as Ray has been targeted by a terrorist (Alan O’Silva) who has kidnapped a young boy and strapped a bomb to him. The terrorist gives Ray and his fellow officers a ransom of $2 million before the bomb’s timer runs out. Ray finds the terrorist at a WWE live event, killing him but with no sign of the boy’s location. With the help of Internal Affairs agent Julia Baker (Katharine Isabelle), Ray searches the city to stop the late terrorist’s countdown to destruction. 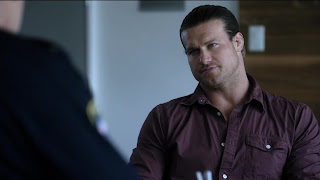 COUNTDOWN could have been a pretty cool film if the trailer was anything to go by. You have two wrestlers in Ziggler and Kane, who are pretty decent actors on WWE television. You have a set up where you’re led to believe that most of the film would take place at and during a WWE event. Add in some interesting action and hottie Katharine Isabelle, and you should have a winner. Unfortunately, the trailer is pretty much false advertising in a lot of ways, making COUNTDOWN less fun than it should have been.

Let me get the positives out of the way: The acting in COUNTDOWN is pretty good. Dolph Ziggler handles himself quite well in his first starring role, doing as much as he can with the material. And if you’ve seen him wrestle, you know he can handle fight choreography better than most. Glen “Kane” Jacobs is a highlight as the stern Lt. Cronin, having the best dialogue and seeming to be having fun in a role that doesn’t involve him playing a killer with a hook. Katharine Isabelle has nice chemistry with Ziggler, shining in certain scenes that allow her to show her chops. I thought COUNTDOWN was one of the better acted films in WWE Studios’ catalogue.

I also liked the action sequences. Sure, they’re not overly original or flashy. But I thought these scenes were some of the best shot, plus the choreography was pretty solid. I’ll never knock Ziggler (as Ray) super kicking a gun-wielding Rusev. That was probably the highlight of the film for me.

And then… there’s everything else. Where do I begin? 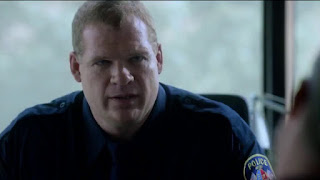 The script for COUNTDOWN is one of the more generic and predictable scripts I’ve seen a film have in recent memory. Usually, WWE Studios movies will take stuff from BATTLE ROYALE or DIE HARD to create their action films. I’m not even sure what COUNTDOWN was inspired by, as it’s all over the place with no real meat on its bones.

The main character arc, I’m guessing, is Ray Thompson wanting to save this boy (with a bomb strapped on him) to make up for the loss of his own son. There are moments in the narrative where Ray is clearly tortured by his son’s passing. He sleeps in his son’s room after reading a bedtime story to someone who isn’t there anymore. He’s reckless at his profession, not really caring about things anymore. The title, COUNTDOWN, is not just about the bomb but about Ray’s idea of how fleeting time is and how no one can change it. Unfortunately, there’s not enough of this aspect to really tie things together and/or make the narrative interesting. Plus, the bomb boy isn’t really a major focus, as he’s talked about, but never shown until the last few minutes of the film. I wanted more scenes with the kid, as that would have created tension and sympathy. But it’s never really about him. It’s about Ray trying to rid himself of the ghost from his past by saving the future of this child. There’s never a real balance between the two plot lines. That’s a major issue.

The script is also very generic, as it’s mainly rogue cops trying to solve a case by interrogating people. They also drive and walk through places to fill time as they search. It’s like watching a Law & Order episode, but with less drama and tension. I never felt as if there were any stakes when it concerned this bomb. Sure, people were going to die. But Ray and Julia Baker just meander around without any sense of urgency. It doesn’t help that Ray murders the kidnapper at the end of the FIRST ACT, instead making the gun runner the main antagonist of the film because Ray busted him at the beginning of the movie. The gun runner isn’t even all that interesting, as he doesn’t get much to do until the film calls for it. Hell, I forgot he was even a character until he showed up with his goons. That’s not good.

The real issue is that the potential displayed in the COUNTDOWN trailer is a slap to the face of those expecting a goofy 90 minutes. The idea of an action cop thriller taking place within an arena while a WWE live event is taking place is brilliant! Not only can you get quick cameos from the real wrestlers playing themselves during this situation, but you can have them interact with Dolph Ziggler and Kane playing different characters other than themselves. Hell, you could have had a scene with real Ziggler and Ray Ziggler interact with each other for a funny moment. But nope, you only get this WWE stuff for about 10 minutes at most. No wrestler cameos. No interactions between the wrestlers and the wrestlers playing actors. You do get that one funny scene with Rusev and Lana, which proves how great this film could have been if there was more of that. It’s a wasted opportunity. WWE Studios played it really safe here, giving us something we’ve seen time and time again. It’s sort of like the current product - stale and leaving us wanting more. 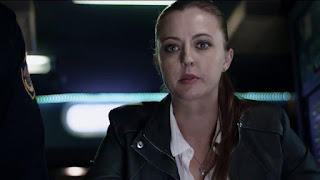 The direction by John Stockwell (Cougar from TOP GUN!) isn’t his finest work as a director. I’m guessing this was one of those “I’ll do it for a paycheck” deals where his heart wasn’t really in it. Like I said, the action is shot decently. And the movie does look nice picture quality wise. But the pacing isn’t all that exciting. And the editing is downright laughable.

There’s a shot where it looks like the tripod took a tumble, creating this tilt effect that didn’t match the scene at all. And the WWE live event sequence had me rolling with laughter at how badly handled it was. During the cop scenes, we get some B-roll footage of wrestlers warming up. Then we’re treated to clips of The New Day, The Ascension, and the Lucha Dragons making their entrances for a triple threat tag team match at a house show. But as the cop stuff picks up steam, the WWE footage takes this weird turn as we see shots of Brock Lesnar having his entrance at the Royal Rumble, followed by another shot of pyro in front of a Royal Rumble tron. So you’re telling me that this house show turned into a pay-per-view within the span of 7 minutes, with different lighting and different angles? I had to pause the film because I was laughing so hard. Let’s not forget that Ray brought a gym bag into the seating area of the arena, which would NEVER happen in a million years. What a mess. 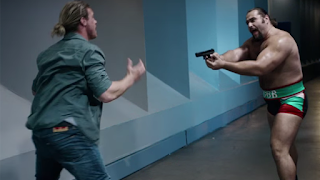 So COUNTDOWN - yeah, it’s a pretty bad film. Is it the worst WWE Studios film out there? No, as it isn’t as bad as THE CONDEMNED 2: DESERT PREY or INSIDE OUT with Triple H. At least COUNTDOWN has some decent acting and action going for it. But with a generic story that doesn’t add anything new or interesting, and editing that’s just laughable, I couldn’t possibly recommend this to anyone. Plus, what wasted potential compared to that surreal trailer that could have created a memorable wrestling B-movie if the entire film took place at a WWE live event (which it doesn’t). There’s nothing here to show the world. 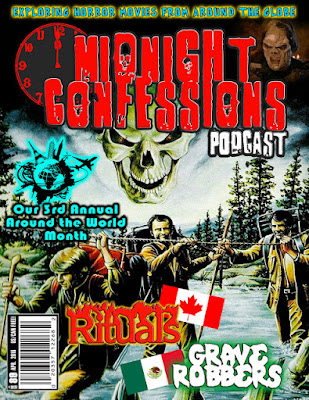 We kick off our 3rd annual Around the World series with RITUALS (1977) from Canada and GRAVE ROBBERS (1990) from Mexico.

Plus the guys play a game of who's the most American. America--fuck yeah!

We're now on Stitcher! - Stitcher Version
Posted by Fred [The Wolf] at 9:14 PM No comments: