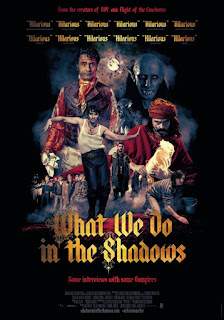 PLOT (from IMDB)
Viago (Taika Waititi), Deacon (Jonathan Brugh) and Vladislav (Jemaine Clement) are vampires who are finding that modern life has them struggling with the mundane - like paying rent, keeping up with the chore wheel, trying to get into nightclubs and overcoming flatmate conflicts. 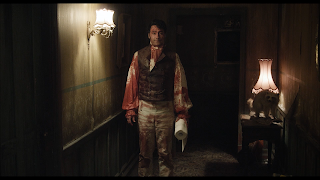 Did you ever wonder what THIS IS SPINAL TAP would look like if it involved vampires instead of a fictional rock band? Well you’re in luck, as WHAT WE DO IN THE SHADOWS is pretty much that film. A horror-comedy that’s played more for laughs than scares, WWDITS is a 2015 film that is produced by Jemaine Clement & Taika Waititi - the men responsible for the cult favorite Flight of the Conchords. With the film now having been adapted into a TV show on the FX Network, I figured it was time to finally watch it and see what the fuss was about when the film was released four years ago. And while it’s not a perfect horror-comedy, WWDITS is definitely a must for anyone interested in a comedy based on horror roots.

What makes WHAT WE DO IN THE SHADOWS work is how self-aware it is. Unlike a terrible spoof film like 2010’s VAMPIRE SUCKS, which used TWILIGHT and other pop culture elements to “make people laugh”, WWDITS is a mockumentary that follows a few vampires who live in a house together and film their lives in a human society [with some werewolves mixed in]. It’s The Real World with fanged creatures who attempt to adapt to a modern world and use this learning experience to feed on victims and figure out where they fit in within a society that sees them as sort of a joke. They dress as if they’re still living in their previous era. They have trouble getting inside establishments because they need to be invited. They still pine for a lost love from ages ago from afar. They feel out of place in a world that doesn’t take them seriously nor understand them in a way they want to be understood. Even the werewolves they encounter have a better grasp on the world than they do. Watching them fumble and live their lives within a society that has already moved on is both funny and clever, as most vampire films never really do that sort of thing. It’s also great that they mention pop culture references, such as the noodles from THE LOST BOYS and even mentions of TWILIGHT. It’s obviously the creators are in on the joke and allow us to be on it as well. 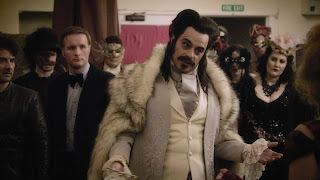 The characters are what makes WHAT WE DO IN THE SHADOWS works, as each one has a distinct personality and allows the story to play out as one would expect out of a reality show documentary. Vladislav is the aristocratic Dracula wannabe who loves sex while still being heartbroken by “The Beast”. Viago is the nice vampire who is love sick, a bit effeminate and is innocent in a childlike way. He also seems to be the most grounded and the leader of the house.  Deacon is the bad boy who believes he’s a hipster and just the coolest vampire ever. Add in Nosferatu looking Petyr [who never says a word and has been living in the basement of the house since before the trio moved in] and you have unique characters you’ll be invested in. The drama ramps up when young Nick, a victim-turned-vampire by Petyr, joins the fray. While he’s the youngest and hippest of the group, which angers Deacon, he’s also kind of a douche bag as he goes against every single vampire rule throughout the film. The only reason they keep him around is due to Nick’s best friend Stu, a human the vampires refuse to turn because he helps them adjust to the modern era. Plus, the vampires just like him for some reason. We don’t know why but because they like him, we do also. We also get familiars, werewolves, and that previously mentioned “Beast”. A colorful cast of characters that you entertain you during the film’s short running time. 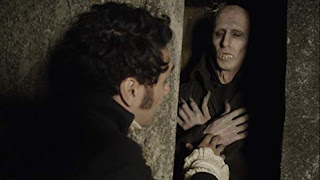 The direction by Jemaine Clement and Taika Waititi is pretty damn great. There’s nothing too stylistic about it, but it works because it’s meant to look like a documentary/reality show. It flows well between characters and the way the character arcs play out are visually expressed well. The film also has some great special effects considering the budget, especially when the vampires turn into bats and start fighting each other. The werewolf costumes are laughingly bad though, but luckily they’re kept in the shadows when they do make their appearance. I also enjoyed a lot of the editing and transitions in the film, which spiced the look of the film. It was simple filmmaking, but it kept your interest the entire time.

The acting is spot on. Jemaine Clement, inspired by Gary Oldman’s performance in BRAM STOKER’S DRACULA, is great as the sex-crazed and aristocratic Vladislav. I also enjoyed Taika Waititi’s performance of the innocent Viago, which was inspired by his own mother. The nagging, effeminate nature of the character was comedy gold. Jonathan Brugh was cool as Deacon, a vampire who thought he was younger and cooler than he actually was. I thought the three of them had great chemistry together, playing off of each other as if they really had been living together for centuries. Even Con Gonzalez-Macue’s cocky performance as the unlikable Nick didn’t hurt the chemistry, even though it sure raised the drama. I even thought Stu Rutherford’s performance as human background player Stu added a lot to the film, even though he was quiet. The cast was totally into their roles and I thought they played loving homages to past vampires while goofing on them at the same time. 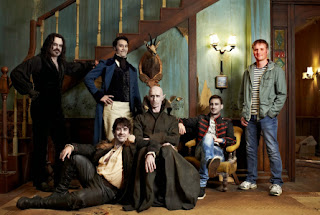 I can’t believe it took me so long to sit down and watch WHAT WE DO IN THE SHADOWS. It’s a clever, witty take on MTV’s The Real World, but with vampires who decide to get real and attempt to adjust to a modern world that doesn’t quite get them. The characters have depth and all feel unique from one another, thanks to the cast who seem to enjoy goofing on the vampiric pop culture while also playing tribute to that world. The direction isn’t anything special, but it works for a mockumentary that happens to showcase some nice special effects and cool gore. I’m glad the film was brought back to my attention thanks to the very good FX television series of the same name. Not every horror-comedy works, but WHAT WE DO IN THE SHADOWS’ humor definitely worked on me. Invite this one in if you haven’t already.