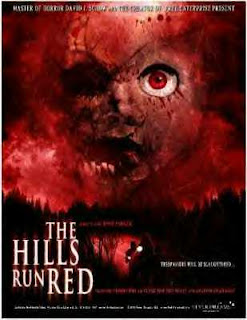 
PLOT - In THE HILLS RUN RED, a young director named Tyler (Tad Hilgenbrink) becomes obsessed with a rarely seen trailer to a film called "The Hills Run Red", deciding to make a documentary about his search to hunt down the film and see it. Apparently, this rare horror flick was directed by Wilson Wyler Concannon (William Sadler) was banned for disturbing content due to its goal to be the most violent and brutal slasher film ever produced. No actor admitted to being in the film. Even Concannon has disappeared. With the help of Concannon's daughter, Alexa (Sophie Monk), Tyler, his girlfriend (Janet Montgomery), and best friend (Alex Windham) go to the location of where the film was shot. Unfortunately, the filming hasn't ended after all these years - and Tyler & gang are the new victims.

STORY - THE HILLS RUN RED arrived with a ton of hype behind it, with many claiming it was going to bring back the good ol' days of the 80s slasher film era. Social networking sites and horror websites promoted the hell out of this independent feature, getting horror fans excited with its cool trailer and premise. Unfortunately like with most films with a huge hype machine, THE HILLS RUN RED doesn't exactly match it.

That's not to say the film is horrible. As a matter of fact, THE HILLS RUN RED is a decent film that does the "film within a film" premise pretty well for the most part. It also takes cliches, like phones never working in the woods, and totally throws them out the window due to the fact that the movie is well aware of other horror films and itself. The self-awareness that sets up THE HILLS RUN RED is the most interesting part of the film, as it makes the film feel fresher than it has any right to be. With tongue-in-cheek dialogue and a genuine feel for the love of horror, the first half of the film works really well.

But once the killer, Babyface [not the R&B singer, though that would be pretty cool too] appears and starts stalking and slaughtering people, THE HILLS RUN RED becomes your standard slasher flick where the characters then fall for the cliches that they apparently threw out of the window minutes before. You get the yokels. You get the usual predictable mistakes by the characters. You get the masked killer who never speaks. The characters who were once interesting become annoyingly stereotypical. You get blood. You get nudity. It's your standard slasher flick when the first half tried not to be that. So it feels a bit disjointed and almost like two different films at times. Not to say I wasn't entertained, because I was until the really uber-predictable ending that sets up the inevitable sequel. It just seemed that the film fell into the trap that it was trying to avoid for 40 minutes and it turns an interesting movie into a generic one by the end. It could have taken a bigger chance, but THE HILLS RUN RED decides to play it safe instead. Oh well.

DIRECTION - Dave Parker does a decent job with the film. It's nothing new from the standard modern slasher fare, meaning it's your typical "point-and-shoot" affair. There is some nice tension and suspense at times, though, and the cinematography does look nice for a low budget film. I also think the best bit of directing was for the trailer of "The Hills Run Red" trailer that's used in the film. It looks like a legit grindhouse-type of trailer and I enjoyed the hell out of it. I kind of wish the entire film had that sort of feel so it would stand out a bit. But Parker does a nice job and it's obvious he's a horror fan giving horror fans what they want visually.

VIOLENCE/SEX/LANGUAGE [aka THE GOOD STUFF] - The language is pretty tame compared to the violence and sex. There is a sex scene in the film, implied sexuality in other scenes, and Sophie Monk and Janet Montgomery show off their boobs [whoohoo!]. And the film is pretty violent, with bodies ripping in half, people getting impaled, and a ton of blood splatter. If you like your characters bleeding and getting tortured, this film is for you.

ACTING - The acting for THE HILLS RUN RED isn't all that bad really. In fact, none of the acting was horrible. Tad Hilgenbrink, who's best known for AMERICAN PIE: BAND CAMP and LOST BOYS 2: THE TRIBE, does really well as the male lead. I think the best performance that I've seen him give in any film so far, so good for him. Sophie Monk does really well Alexa. She gave a multi-layered performance and I dug it. I also dug looking at her. What a babe! Janet Montgomery and Alex Wyndham do well as Serina and Lalo. William Sadler is awesome as Wilson Wyler Concannon, seemingly enjoying playing the villain role. And Raicho Vasiley does nicely as Babyface, even though the villain didn't have much of an effect on me compared to some other horror icons out there. But Vasiley was game and had great presence on film.

MUSIC - Typical soundtrack for a slasher film. I don't remember it honestly but I didn't hate it and it fit the film well.

THE FINAL HOWL
While it doesn't live up to the hype, THE HILLS RUN RED is a decent horror film that gives fans what they're looking for. It brings nothing new like the first act had tried to promise before going into generic slasher mode, but the film is quite entertaining even while trying to figure out the twists and turns. I think it would be a solid buy if it were edgier in its narrative and visuals [and if that crapola ending was better], but I wouldn't be opposed to say this is a great rental for a horror movie night with your friends. I think every horror fan should take a trip to these HILLS at least once.