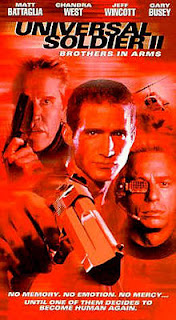 
PLOT
After escaping the Universal Soldier program with the help of journalist Veronica Roberts (Chandra West), Luc Devereaux (Matt Battaglia) is trying to readjust to his new life after being resurrected. While hiding at Luc's parents' farm, the people behind the Unisol program [mainly 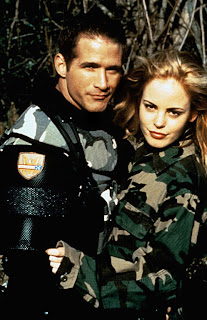 Otto Mazur (Gary Busey) and Dr. Walker (Richard McMillan)] activate some sort of homing device that was supposedly implanted inside Luc's body. This triggers Luc to return to Chicago where the Unisol headquarters is at, where he has his memory reprogrammed for a return into the Unisol program.

Veronica obviously follows and sneaks into the Unisol lab to save Luc. Instead, she ends up finding Luc's older brother Eric (Jeff Wincott), who had apparently died during the Korean War but resurrected for the Unisol program. However, Eric didn't react well to the change and was kept hidden there. The two Devereaux brothers shortly reunite, but Mazur manages to ruin things in order to sell the Universal Soldiers to terrorists.


I have three words for UNIVERSAL SOLDIER II: BROTHERS IN ARMS: 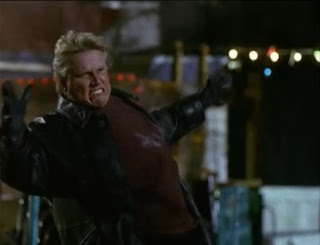 ovie from receiving a BOMB rating. Gary Busey is usually memorable in anything he does. While this isn't his best performance in a movie ever, at least he took the material seriously enough to be a pretty cool villain in Otto Mazur. Too bad he wasn't in a better film, but it's obvious he wasn't just in this movie for just a paycheck. Chandra West takes the role Ally Walker had originated from the original UNIVERSAL SOLDIER, and I kind of liked her more than Walker actually. West has a spunkiness that I dug for the role, plus she's very easy on the eyes. She was also game for anything and had some good one-liners. As for Jeff Wincott, it sucks this martial artist didn't get to do more action scenes, instead sitting down or just standing around most of the time. But he was more believable in the Universal Soldier role than anyone else in this film. Hell, I thought he would have been a better fit for the Luc role rather than Matt Battaglia. I really liked his performance. These three are the saving grace of the film.

- The story. Where do I begin here? While I appreciate that it actually continues from the original film, unlike the first "official" sequel, 1999's UNIVERSAL SOLDIER: THE RETURN, I kind of wish this "Made for the Movie Channel" sequel never existed. While there is a semblance of a plot here, there's nothing really holding it together. For one, why couldn't Eric adapt to the Unisol program? What made him so special and so resistant, while his brother wasn't? Why did they even keep him around, knowing he was a failed experiment? And how come the filmmakers didn't explore Eric trying to adjust to 1998, especially since the last time he was conscious was during the early 1950s? This could have been an interesting subplot to play out.

Also, Otto Mazur wanted to sell these Universal Soldiers to the highest bidder. Yet there were only like 4 guys and he just kept killing people just to reprogram them. Is this what the evil consumer was paying for? I would feel pretty ripped off having a middle-aged man being my personal UniSol! Hell, the UniSols other than Luc and Eric had no personality and were just window dressing until it was their time to die or retreat. What's the point?

And the worst part of the story is that it was pretty much all bones but no meat, meaning I watched two hour-long episodes edited together into one 90 minute movie where 40% of it was actual storytelling and the rest was just annoying padding. I learned nothing about the UniSols. I learned nothing about the brotherly relationship between Luc and Eric. Veronica and Luc were meant to be lovers, but there was nothing really going on there except for a kiss Luc couldn't forget. There's just really nothing to chew on here. The original film had an actual story you could be entertained by. This was a shadow of that film. Even as a TV show, I doubt anyone would watch this for longer than three episodes until giving up.

- Direction and non-action. Jeff Woolnough directs UNIVERSAL SOLDIER II: BROTHER IN ARMS like a made-for-TV feature, which is fine because that's 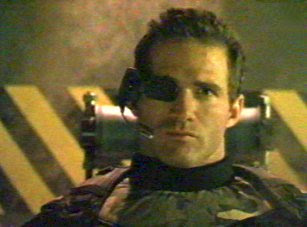 what it was supposed to be. The film doesn't look particularly interesting to look at photography wise and just is what it is. The problem is that Woolnough has no idea how to direct an action film. I'm sure budget restrictions had a hand at how the film turned out [meaning cheap], but that's no excuse not to have decent action sequences during an action show/TV movie. What does qualify for action here is pretty lame, and few and far between. If you consider action one guy kicking and another guy blocking that kick really slowly before they repeat the sequence again, then this is for you. Sure we get explosions and gunfire and stuff like that, but there's not much of it. Instead, the film is making people discussing what they're gonna do and/or doing something, like riding a train for 10 minutes when that could have been edited in three minutes. It doesn't help that the dialogue is boring is hell. Plus the slow motion was terrible. The quick editing sucked. The production values were pretty bad. Money or not, there should have been something that fans of the original film could enjoy. Instead, they'll end up stopping this before getting to the end. Shame.

- Matt Battaglia. I've seen Battaglia act in other projects and he isn't a terrible actor. But he's not the right guy to replace Jean-Claude Van Damme in a UNIVERSAL SOLDIER movie. For one, Battaglia has a gruff Southern accent. Isn't Luc's family French? Also, he takes the robot thing a bit too far by acting like a machine rather than a human struggling with being programmed as a machine. Plus he doesn't get much to do anyway. He's either sitting or standing making duck lips, spouting one-liners Arnold Schwarzenegger wants back, or showing off his ass. Not much acting and not much of a good impression either.

- The soundtrack. Oh God, this is probably the one thing I hated the most about this film. The songs themselves aren't terrible. Hell, Norman Greenbaum's "Spirit in the Sky" plays near the beginning of the flick - to Gary Busey and some noobs walking in slow motion before killing someone. What does that song have to do with any of that? Then we have a pop-rock song while Veronica finds Eric in some sort of chamber that has doesn't reflect the situation or mood at all! We even have a country line-dancing moment that doesn't add to the film at all. It's like the director and/or editor had no idea about sound design. If you're gonna use music to enhance the film, at least have the songs make sense and go along with the film in a way that it's telling us something. I laughed at how bad this was at first until I just found it sad and annoying. It pretty much ruined the film for me. 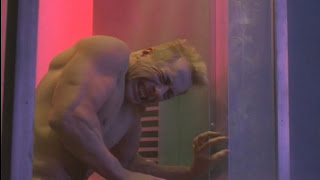 UNIVERSAL SOLDIER? UNIVERSAL SOLDIER II: BROTHERS IN ARMS is a horrible film in almost every way. The story is non-existent. The direction is bland and distracting at times. The soundtrack is used wrong. And there's not enough action to make this qualify as an action sequel. If it wasn't for three actors who actually tried to make the most of this crap, I would have given this the lowest rating possible. But I've actually seen a lot worse than UNIVERSAL SOLDIER II: BROTHERS IN ARMS, although this came close. I'm sending this sucker to the WTF? Vault where I can reprogram it so I can forget it even exists while it can...