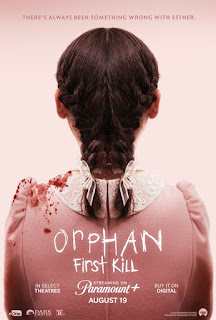 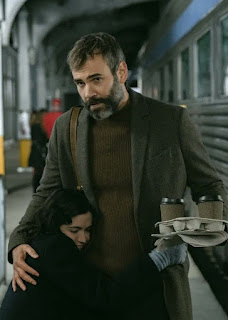 Considering ORPHAN was released in theaters back in 2009, I was surprised that not only a new ORPHAN film was in production, but that it would also be a prequel with the same young actress now 13 years older. While I was curious enough to want to see what eventually would become ORPHAN: FIRST KILL, I also kept asking myself if a prequel to ORPHAN was even necessary. ORPHAN isn’t a horror film that a whole lot of people were talking about until the new film, even if it did do well enough at the box office. And considering how that film ended, it was obvious that the movie wasn’t meant to create a franchise for future installments.
But then early reviews came out and the movie was being praised for some clever things within the narrative, while keeping expectations low to make it known that it wasn’t as good as the first film. Those reviews got me a bit more excited for the project, especially when it was decided to do a day-and-date release with Paramount Plus. While movies going straight to streaming used to be seen as a bad thing, there have been some good films that were exclusive to streaming platforms, making me hopeful that ORPHAN: FIRST KILL would join that group. So yes, this prequel is nowhere as good as the 2009 film. But considering the lengths the filmmakers went to in order to make this feel like a prequel, considering the main actress is now 13 years old playing an even younger version of herself, ORPHAN: FIRST KILL has no right being as good as it is.
ORPHAN: FIRST KILL is one of those movies that’s hard to review, especially in terms of its narrative, due to a major twist midway though the film. Like the first film, the twist really changes how the film is presented. Before the twist, this prequel is pretty standard in what one would expect narratively. You see villainous Leena in a mental institution, causing a whole lot of trouble. Through stupidity by some of the supporting characters, she escapes and takes the identity of a little girl since that’s basically her gimmick.
Here, we learn where the Esther persona from the first film comes from. Apparently, Esther was a missing child who resembles Leena, making sure to get attention from the family who is looking for her in order to live a new life outside of the institution. While the family does seem happy to have her, some grow suspicious when Leena can’t remember certain things or people, or just behaves in a way that the real Esther wouldn’t previously. At this point, you’re just waiting for Leena to screw things up to a point where she has to defend herself and hurt this family she manipulated herself into, especially considering a local detective is trying to find clues as to how Esther was suddenly found so easily and her strange behavior to everyone around her. 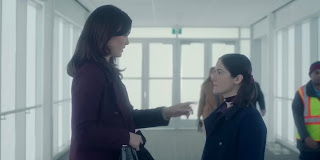 It’s pretty common storytelling for a prequel like this. That is, until the twist midway through the movie that changes everything about ORPHAN: FIRST KILL. I usually see twists coming a mile away in these types of films, but this one threw me for a loop when it presented itself. While the first half was pretty pedestrian, the second half is where the film really takes off and gives itself a reason for existing to begin with. The drama increases. The tension and atmosphere get thicker. With this new information, you’re just waiting for the dam to burst. It’s done so well and the change in narrative is so bonkers, that you actually start to feel sympathy for a character who, before, wouldn’t or shouldn’t get any. It changes the complete dynamic of this sequel and I lived for it every second. While the conclusion is very predictable considering this is a prequel, the ride getting there is more fun than it has any right to be.
The direction by William Brent Bell isn’t as good or as dynamic as Jaume Collet-Serra’s from the original film. Bell’s vision isn’t as stylish, or as thrilling as Collet-Serra’s work on ORPHAN. The use of CGI and body doubles to de-age Isabelle Fuhrman mostly works, especially since the film is filtered and lit in a certain way to soften the CGI work here. There’s nothing really visually inventive about Bell’s work here, but he maintains a nice pace and lets the twists in the film’s narrative drive the film and set the different tones that actually benefit each act of ORPHAN: FIRST KILL. Is the film a horror movie? A B-movie? A comedy? Yes, it is. And it oddly works.
The actors are good, in particular both Isabelle Fuhrman and Julia Stiles in their respective roles. Despite being over a decade older, Fuhrman still captures the evil and manipulative essence of Esther as if she never left. Julia Stiles is probably even better, playing a distressed and complicated mother who is suspicious of Esther. While Fuhrman has a more restrained performance, Stiles really lets it all out and manages to have some of the best moments in the film. I thought the two actresses played really well against each other. Rossif Sutherland is pretty much a repeat of the father character in ORPHAN but less interesting, unfortunately. Matthew Finlan is more interesting as the teenage son, Gunnar. His layers peel off as the film runs on, giving Finlan some nice beats to play with. Not a bad cast, but Fuhrman and Stiles carry this film to levels far more entertaining than I was expecting.
THE FINAL HOWL 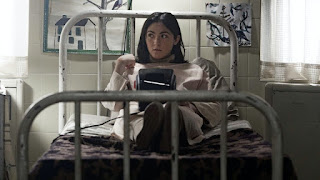 After 13 years since the first film’s release, I was not expecting ORPHAN: FIRST KILL to be as good and as fun as it is. While this prequel starts out pretty pedestrian, the plot twist midway into the film changes the narrative completely, taking the audience on a tense filled and insane ride to its predictable ending. The twist turns a pretty standard horror film into B-movie gold that doesn’t fail to be entertaining. While the direction by William Brent Bell isn’t anything to talk about, despite doing what it needs to do visually, the use of de-aging CGI and body doubles for the Esther character are used well for the most part. And actresses Isabelle Fuhrman and Julia Stiles carry the film from beginning to end, giving multi-layered performances that get pretty interesting as the film rolls on. I’m really surprised how much I enjoyed ORPHAN: FIRST KILL, as this prequel has no right being as entertaining as it is. I wouldn’t be opposed to a future installment if this movie is successful enough.
SCORE