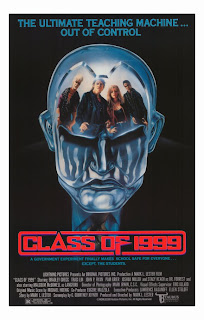 
I'll never forget 1999. Britney Spears, Christina Aguilera, and boy bands ruled the radio. People were livin' la vida loca. THE SIXTH SENSE and THE BLAIR WITCH PROJECT scared the shit out of a lot of people. Then-President Bill Clinton was still denying sleeping with that young intern. And I was 18 years old and graduating from High School. Yes everyone, I AM the Class of 1999!

However while watching CLASS OF 1999, which came out in 1990, I don't remember my High School life being as violent. Gang wars before, during, and after school? Android professors? MULLETS??? If this is what the Class of 1999 would have become, I probably would have found that "Genie In A Bottle" and rubbed her ass the right way so everything can go back to normal! But thankfully, the film didn't come true, even if CLASS OF 1999 is a cool flick in its own right.

PLOT
In the "future" [or is it "past"? or "future past"? aw hell, forget it!] of 1999, the American school system has gone to hell. Gangs who've watched THE ROAD WARRIOR too many times rule the schools. Violence and drug use are normal routines in and out of school. Guards and police barely are able to enforce any sort of rules. And no teaching ever takes place because the students are too busy fighting each other rather than learning from one another.

When the robots begin to do things on their own accord, recently-released-from-prison Cody Culp (Bradley Gregg) begins to notice that things aren't quite right with his new teachers, especially when the students end up being abused or even killed. With the help of Langford's daughter Christie (Traci Lind), Cody decides to see what's going on.

REVIEW
CLASS OF 1999 is sort of considered a "sequel" to 1982's CLASS OF 1984, which also dealt with violence in and around schools. The two films aren't really connected and are definitely different in terms of look, style, and message. I first watched CLASS O 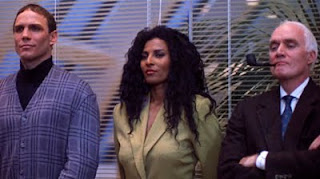 F 1999 in a theater back in 1990 in a double feature with LEATHERFACE: THE TEXAS CHAINSAW MASSACRE III [which will be reviewed sometime in August hopefully]. And quite honestly, this film is the one I mostly remembered of the two. And watching it 20 years later, I see why because it's actually a pretty fun movie.

Mark L. Lester, who also wrote, directed, and produced CLASS OF 1984, seemed more inspired by TERMINATOR, ESCAPE FROM NEW YORK, and the MAD MAX films this time around. We get killer androids. We get gangs that are distinguised by their neon colors. We get shoot outs, car/motorcycle chases, and huge explosions. It's more of an action/sci-fi hybrid rather than the more grounded exploitation style of CLASS OF 1984. In a way, I do feel that the sci-fi stuff dates CLASS OF 1999 a little bit [even though the message of technology taking over in a good and/or bad way is still ringing true even today], CLASS OF 1999 is still nevertheless an entertaining film.

While the story itself is barebones [humans vs. robots - nothing more, nothing less] and the character development not really there, except for the villains [who happen to be robots, go figure], the dialogue in the script is pretty humorous [although I'm not sure if it's intentional or not]. Here are some gems:

"These things are like a bad, fucked up George Jetson nightmare!"

If campy dialogue like that doesn't make you chuckle, then you're probably an android. And there are more of them in this movie, making a fairly straightforward script into something a bit more entertaining.

Like I said, the development of characters is fairly weak for the most part. We have a love story angle with Cody and Christie that isn't deep enough for reality dating shows such as The Bachelor or Rock of Love with Bret Michaels. They hang out. They fight. They 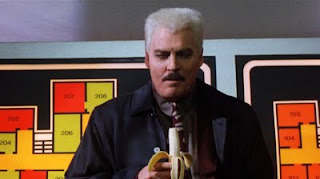 distrust each other. Then they have to save each other. Nothing more than that. They were more brother and sister than romantic counterparts. I also wanted to know more about the gang rivalry between Cody's gang and Hector's gang. They just seemed to hate each other because that was in the script. Also, why was Cody in jail to begin with at the start of the film? When I know more about killer robots, it's kind of sad. But then again, you're not watching this movie for quality screenwriting, are you? Still, it would have been nice.

The special effects are actually very well done for a low budget feature. The androids, when their skin was peeled off towards the end, looked really cool and wouldn't be out of place in a TERMINATOR film. We get arms peeled off to reveal flamethrowers, drills, and a tommy gun. Plus students get murdered in really grisly ways, like being burnt alive and even being split in half. There are those who even get a hard spanking [literally] by one of the teachers. Plus one kid got drilled in the head that sort of reminded me of PHANTASM. The ending of the film is very violence with a lot of shit blowing up, and the effects team did a really great job making it come to life. The budget went to a good place.

The direction by Mark L. Lester is good, although his work on CLASS OF 1984 was better. He handles the action sequences quite well and the pacing of the film is excellent, meaning you'll never be bored waiting for something to happen. I love the locations used and the cinematography is also quite nice. I kind of wish these kids weren't wearing what they were wearing: bulky leather jackets, tight leggings that happened to be in neon colors, and stupid headwear. It looked out of place with the seriousness of the rest of the film. But at least it made me laugh and glad that these fashions never came true.

The acting is good as well. Bradley Gregg, who many horror fans remember as Phillip the human puppet in A NIGHTMARE ON ELM STREET 3: DREAM WARRIORS, as well as River Phoenix's older brother in STAND BY ME, does very well as the lead character Cody. Gregg's character wants to change from his bad boy ways by doing something right by the end of the film, and Gregg brings that out quite nicely. He carries the film well and has nice chemistry with Traci Lin [who does a capable job as the token girlfriend] as well. Malcolm McDowell is pretty much wasted as Dr. Langford, the school headmaster. Honestly, anyone could have played this role and they would have all been interchangable and unmemorable. That's not McDowell's fault, as he's a great actor. I blame the screenwriter for not giving the man materia 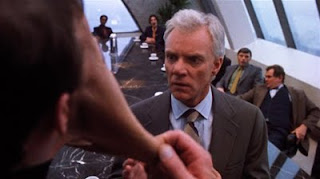 l worthy of his skill. Stacy Keach has more to do as the evil Dr. Forrest, showing off the maniacal nature of his character with ease and glee. I kind of wish McDowell had this role, but Keach pulled it off.

As for the actors playing the androids, they were probably the best actors in the film. Patrick Kilpatrick [nice name there buddy] brought a mean, intimidating presence as the nutty gym teacher. John P. Ryan as Mr. Hardin cracked me up with his pipe smoking, one-liners, evil sneer, and his spanking techniques. But the best one was Pam Grier as Ms. Connors, the badass History teacher who took no shit. These actors had the best and more entertaining stuff to do.

- In 1999, cellmates threw toilet paper at those who got released from prison. That's a really shitty to do. What a bunch of asswipes!

- Don't ever tell Pam Grier to "fuck off". She'll go FOXY BROWN on your ass! And I don't mean like the rapper, although that would be just as bad, if not worse.

- Mr. Hardin, the math teacher, spanked his students for misbehaving. And for those who get aroused by this abuse, anything under 12 inches doesn't constitute bringing a ruler to class. You're still unprepared!

- Mr. Hardin enjoys teaching about The Trojan War. I think more students should learn about this time in history. Knowing the origins of teenage pregnancy, safe and unsafe sex, and the rise in power of one Maury Povich would have saved people a lot of trouble.

- Mr. Hardin made of the students ingest his own drugs to end his addiction. Dr. Drew should take note for the new season of Celebrity Rehab.

- Angel's gang colors are black, yellow, and purple. Either the confused kid is colorblind, or he's one of the new members for Prince & The Revolution. Hmmm...maybe it is the latter. You gotta party like it's 1999, right?

- The battle boys showed Malcolm McDowell how they discipline others. I think I just viddi'd some ultraviolence, my little droogs.

- Hector said that Ms. Connors had "bionic tetas". I wonder if the Six Million Dollar Man had a bionic... you know what? I don't wanna know. 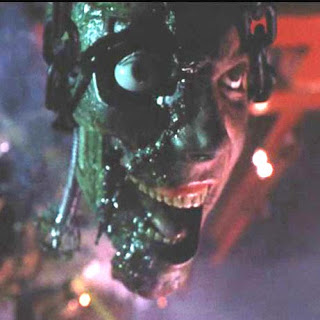 If you're a fan of CLASS OF 1984 and expecting this semi-sequel to be as memorable or as meaningful in its message, you're gonna be disappointed. But if you want to see humans and robots destroying each other in cool action sequences without thinking too much as you watch, CLASS OF 1999 is definitely your film. Sure the story is lacking, has some needless exposition, and campy dialogue and fashion sense. But CLASS OF 1999 never takes itself seriously and knows right away which audience it's targeting. On all accounts, this is a bad movie - but it's an extremely fun one that you can't help be charmed by. Just relish in the campiness of it all and you'll have a good time.