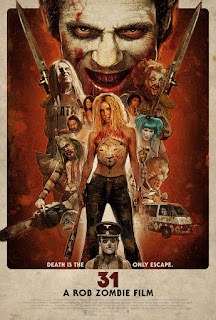 
*Review can also be found at That's Not Current*

There’s no doubt that musician/director Rob Zombie has become a controversial figure in the world of modern horror. His love of the 70’s grindhouse aesthetic, and white trash rednecks who make sailors blush with their profane language, have divided horror fans to the point where fans of the man have been bullied by those who aren’t - and vice versa. Personally, I respect the man for having a true vision and sticking with it for the most part. He’s had some great films [THE DEVIL'S REJECTS, THE LORDS OF SALEM] and some questionable ones [those HALLOWEEN movies], but you can always take something positive from each one of his films.

Now in 2016, Rob Zombie has unleashed his take on “The Most Dangerous Game” called 31. It has already separated the horror community just from its limited theatrical release alone. Is 31 as bad as some say? Is it the “best Rob Zombie film” like others have claimed? Better grab your weapons, because half of you aren’t going to like what I got to say…

PLOT
It’s Halloween night in 1976, and five traveling carnival folk (Sheri Moon Zombie, Meg Foster, Jeff Daniel Phillips, Kevin Jackson, and Lawrence Hilton-Jacobs) end up on a deserted road blocked by a row of scarecrows. Suddenly, they’re abducted by a trio of rich socialites (Malcolm McDowell, Judy Geeson, and Jane Carr) to play an annual game called 31 - a dangerous game where they must survive for 12 hours while being hunted by psychopaths dressed as clowns. If they survive, they will be set free - even though no one has survived a game of 31. 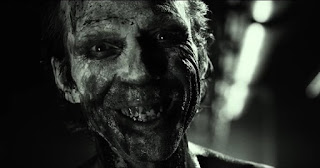 I was really excited for 31. Unlike some people who will already hate a Rob Zombie film even before they’ve seen it, I actually look forward to Zombie’s films since they’ll provide at least some sort of horror entertainment on first viewing. Zombie’s last film prior to 31, the beautiful and haunting THE LORDS OF SALEM, wowed me on first watch in theaters, showing such a maturity from Zombie that he hadn’t displayed in his filmmaking career. So while I knew that 31 would go back to the grindhouse tone of Zombie’s first features, HOUSE OF 1,000 CORPSES and THE DEVIL'S REJECTS, I was hoping it would at least contain the maturity and quiet brilliance that THE LORDS OF SALEM had possessed. Unfortunately after watching 31, I couldn’t help but feel that Rob Zombie regressed as a filmmaker, playing it safe rather than stepping out of his comfort zone.

Let’s get the good stuff out of the way. As with every Rob Zombie film, his love for classic rock infuses the story he enjoys telling. The soundtrack for 31 is really great. Hearing songs like James Gang’s “Walk Away”, The Mamas and the Papas’ “California Dreamin’”, and Aerosmith’s “Dream On” really sets a tone and setting for 31. Plus Rob Zombie’s score with John 5 adds some atmosphere to the film. No complaints here.

I also enjoyed most of the acting in 31, particularly by the actors portraying the villains. Richard Brake steals the show as Doom-Head, a sociopathic clown who is considered the game’s cleaner - taking care of the loose ends in case the other clowns fail. Brake opens the film with a chilling, yet sophisticated monologue that draws you right in. And his entire role during the film’s final act is just wonderful and mesmerizing. Brake is one of the more underrated character actors that deserves more notice. He’s the highlight of the film. I really liked E.G. Daily as Sex-Head. She looked hot and portrayed her crazy character in a cute and sexy way. I even liked Pancho Moler as Sick-Head, making me laugh with his Nazi character. By the way, how can you not like a Nazi who happens to be a little person and Latino?? The irony is hysterical. The socialites played by Malcolm McDowell, Judy Geeson, and Jane Carr do well with their limited roles, bringing some class to 31. As for the protagonists, only the ladies really stood out for me. Sheri Moon Zombie has become a joke to Rob Zombie haters, but she does well as Charly. She has a bit of Baby Firefly in her, but uses it for good instead of evil. But Meg Foster really gave a great performance as Venus. Tough and sympathetic, Foster grounds the film in a way the film doesn’t really earn. If she was the main character and written as well as she was, I probably would have enjoyed 31 more.

I also thought the violence fit the story of 31. While not as gory as I was expecting, considering Zombie’s previous films, the action is definitely brutal and sometimes intense. Throats get sliced open. We get decapitations. We have blunt trauma to the skull. We stabbings and gunshots. 31 is not a pleasant film, but what else do you expect out of a Rob Zombie film? It fits with the whole grindhouse tone very well.

And I also felt some of Zombie’s direction was good, even if it wasn’t his best work. I enjoyed the set pieces and liked the lighting and mood of 31. The transitions that were still-frame and would transition vertically to another scene were a nice touch. And the film looks dirty and gritty for the most part, which fits Zombie’s aesthetic.

Unfortunately, the rest of Zombie’s direction wasn’t great. The shaky cam just annoyed me, taking scenes of violence and making them barely understandable. They lost their effectiveness because I could barely see what was happening. Shooting some of these sequences in close up didn’t help matters either. I’m not sure if this is what Zombie had intended, or the MPAA stepped in and Zombie had to censor himself. And the pacing was off at times - with a first act that felt like it came from a different film, to a dream sequence that didn’t add a whole lot but was fun nonetheless. People knock Rob Zombie’s films, but even the haters can respect and admire his vision. Unfortunately, even 31 fails at that. The visual presentation felt old hat and seemed like he de-evolved from what he had achieved with THE LORDS OF SALEM.

The biggest culprit of 31 is the script itself. I never found Rob Zombie to be the best, or most articulate, screenwriter in Hollywood history. But Zombie can bust out memorable characters, especially on the villain side, with dialogue you could quote long after the film has ended. The only character that really gets a memorable presentation is Doom-Head, but I already praised Richard Brake enough. The villains are a lot of fun, written as well as they could be, coming across as all memorable and different. But when it comes to our heroes, I really didn’t really care about what happened to them or not. Zombie never portrays them as real people until it’s too late. In 2002, these foul-mouthed, sex-crazed characters without much character development weren’t that much of an issue since the colorful villains balanced them out. But the villains aren’t really the focus of 31, having us followed main characters who are paper-thin and just come across as stock characters that audiences won’t really care live or die. Meg Foster’s Venus works the best since she comes across as a human being from the start, taking charge of things and actually displaying a heart and soul when it comes to certain situations. Even Sheri Moon’s Charly is okay since her dialogue gives away on how tough and independent she is. But the male characters honestly have no real arcs, making their acts of survival ring hollow.
I also had issues with the game itself. 31 is a variation of “The Most Dangerous Game” premise that has been used in multiple films [THE RUNNING MAN, TURKEY SHOOT, THE HUNGER GAMES, BATTLE ROYALE], with each one explaining why this game is happening and presenting some sort of commentary about social or class issues. 31 doesn’t even bother with that. Why is this game happening? Why are these three socialites taking pleasure in this? How come the villains all have to dress up as clowns? How come the psychopathic villains end the game when the time ends? There was no real good sense of time in the narrative, especially at the end, and there’s no real purpose other than violence. Maybe that works for some people, but I need a bit more than that. There’s one thing to capture people and play a murder game with them without reason. But if you do this every year, there has to be a reason for the madness. And Zombie never presents us with one. Mystery is good, but not for a premise like this.

And I really disliked the ending of the film. I won’t spoil things, but I just threw my hands up in frustration, expecting more. I guess I was expecting the ending to take a different turn, but it left a dissatisfied taste in my mouth. 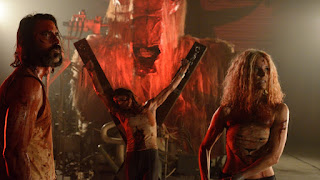 31 is a film I wanted to love, but felt nothing but disappointment once it ended. Rob Zombie has proven himself to be an interesting filmmaker, presenting ideas that most mainstream horror directors won’t touch to go against studio expectations. But 31 feels like a step back from his previous work, giving us glimpses of greatness and promise that would have been presented better with a rewrite or two. I liked the villains, but didn’t care for our “heroes”. The direction was a mixed bag. 31 wants to fit in the world of HOUSE OF 1,000 CORPSES and THE DEVIL'S REJECTS, but just makes itself feel inferior to those two better films. 31 isn’t a terrible film and Rob Zombie fans will definitely find something fun with it. But I was expecting more and it just wasn’t made for me. Maybe with a rewatch, I’ll appreciate it more than I do now.