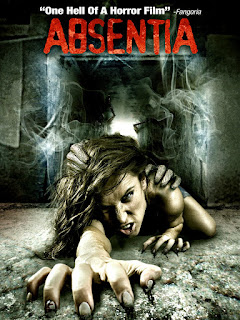 Tricia’s (Courtney Bell) husband Daniel (Morgan Peter Brown) has been missing for seven years. Her younger sister Callie (Katie Parker) comes to live with her as the pressure mounts to finally declare him ‘dead in absentia’. As Tricia sifts through the wreckage and tries to move on with her life, Callie finds herself drawn to an ominous tunnel near the house. As she begins to link it to other mysterious disappearances, it becomes clear that Daniel’s presumed death might be anything but ‘natural.’ The ancient force at work in the tunnel might have set its sights on Callie and Tricia - and Daniel might be suffering a fate far worse than death in its grasp. 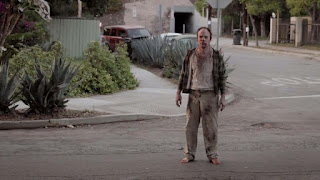 While he had directed some independent films prior to this film, 2011’s ABSENTIA was Mike Flanagan’s breakthrough film into the mainstream success he has now. I’ve known about this film for a while, but never took the chance to sit down and actually watch it despite all the praise it has received the past 10 years. In fact, I haven’t watched much Flanagan stuff at all besides 2013’s OCULUS [good] and 2019’s DOCTOR SLEEP [loved] - as well as his 2016 Haunting of Hill House Netflix series that I enjoyed. So it was cool to see where the director started from before given a real budget to really showcase his vision that he’s known for now.

ABSENTIA is a real slow burn of a film, taking its time to build a supernatural psychological thriller that honestly presents more questions than answers by the film’s final second. The slow pace obviously lets the two lead characters, pregnant and mourning wife Tricia and her addict sister Callie, carry the film with emotional and dramatic beats as they deal with the events of the narrative. Both try to use religion to deal with their grief and demons, which doesn’t exactly work all that much by the end. Tricia tries to move on from the fact that her missing husband has been gone 7 years and can be declared legally dead by getting involved with the lead detective for the case, even getting pregnant by him. Callie also comes across strange, malnourished people inside a tunnel minutes by Tricia’s home, leading to strange happenings inside of Tricia’s home. Things take a turn when Tricia finally has a first date with her detective lover, only for her missing husband to return the moment she leaves the house. This should be a joyous occasion, except that the husband is malnourished, confused and acting weird to the point that he doesn’t seem himself anymore. Things just get weird after that, but I don’t want to spoil anything for those who haven’t watched.

While the slow burn and ride from beginning to end is never boring and actually contains some creepy moments, I feel like the film never really tells you anything. Yes, we see people grieve over their missing loved ones, struggling to move on thinking they’ll never return after so many years. We also see people sacrifice their own well-being to help another person who is struggling, only for it to bite them in the butt when past demons are used against them. There are a lot of human elements here that work and the drama is well written and presented nicely. But we never really learn why people in this particular area of town have gone missing for decades. We see glimpses of the culprits but never really learn who, or what, they are. And while the ending is a bit sad and unsettling, it doesn’t really answer anything either. I guess sometimes it’s good not knowing what the real deal is, but an audience should be given something tangible to chew on in a standalone feature. A film or a story shouldn’t leave one with more questions than answers. 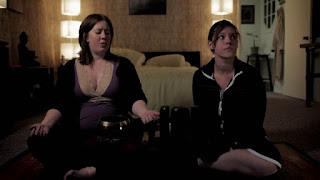 I also thought the characters weren’t the most interesting or deep. Considering there are only a handful of main characters in the film, I would know or even care more about them. Tricia mourned her missing husband, but when there’s nothing about their relationship that makes me want to invest in this subplot beyond the mystery behind it, that’s kind of an issue. There are other moments where opportunities arise for more depth to happen, but the film would rather keep things on the surface than to get any deeper than that. Maybe it was a budgetary issue. Maybe it was just average writing. But mysteries should be explored and I feel ABSENTIA didn’t do that enough for me.

As for Flanagan’s directing, the first thing that should be said is that ABSENTIA is not a pretty film to look at. Considering the film was only made for $70,000 from Kickstarter funding, you’re not expecting a polished, studio looking film that will wow audiences with its cinematography. The film is very muted and has editing issues at times. But then you get flashes of what Flanagan does really well, such as the use of monsters hiding in the background, smart choices of sound design, and a great use of shadow and light. Considering the budget, the malnourishment look for the missing people look pretty damn good, even presented as kind of creepy at appropriate times. Not all the jump scares work, but the camera tricks accomplish more than they don’t. It’s easy to see how Flanagan became a bigger name in the genre because he definitely has a style that stands out.

The acting is good for the most part. ABSENTIA is carried by the two lead actresses - Courtney Bell and Katie Parker. Parker, in particular, is really good as Callie. She’s the film’s guide in figuring out what’s going on and believably deals with aspects of the mystery, while Bell is doing more of the emotional beats but doesn’t get to do as much as Parker. But the two actresses share nice sibling chemistry and play off of each other very well. The other actors are decent-to-good, while frequent Flanagan collaborator Justin Gordon probably hams it up a bit too much as a skeptical detective who feels like he should be in another movie. And it was a nice coup to get Doug Jones to appear in a short role, considering Flanagan wasn’t a huge director yet. ABSENTIA is the film that got Hollywood in noticing director Mike Flanagan, making him a force in the horror scene today. The film itself, done with a $70,000 budget, is a good piece of moody and atmospheric mystery-drama with those horror flourishes that Flanagan has made a staple in his direction for the past decade. It has a nice use of shadows and light, creepy people hiding in the background when you least expect it, and camera tricks that succeed more than they don’t. The narrative itself is bleak - dealing with loss, addiction, and the struggle to move on from the demons that continue to haunt. It’s too bad that the mystery is never really solved or explained in a way that’s satisfying by the film’s end, leaving one with more questions than answers. Also, while the characters are relatable on the surface due to the premise, there’s not much to them depth wise which makes it harder to care about what happens to them in the long run. Thankfully, lead actresses Courtney Bell and Katie Parker bring their “A” games to their roles, carrying the film as best as they can. And the film’s slow burn keeps one invested, rather than turned off, as new things are always presented. It won’t be for everyone, but ABSENTIA is worth a look if you’re in the mood for something downbeat and thought-provoking for 90 minutes.