The WTF Worst Films Extravaganza Presents: The Quick and the Undead (2006) 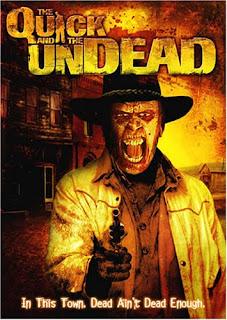 The movie takes place in the present, but in this universe, a plague has broken out and the infected have been transformed into zombies. No explanation is provided for the source of the plague, nor is it explained how the original victims were infected, since by the time the narrative begins the infection spreads by bite. Nevertheless, the action starts 80 years after the initial outbreak. The western United States has devolved into a disconnected series of ghost towns overrun by zombies, and the government is awarding bounties in exchange for the pinkies of the undead. 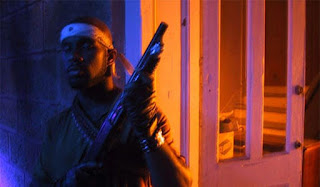 So I’ve been following a few movie lists out there in order to watch films I haven’t given much of a chance for whatever reason. This 2006 indie zombie-western was on one of the lists, which focuses on films that are either terrible or thought to be terrible. But sometimes, there are bad films out there that are genuinely entertaining for all the wrong reasons, making the viewing experience a fun one. Unfortunately, THE QUICK AND THE UNDEAD isn’t one of those films. In fact, I wish I had used my 80 minutes for something else because there’s really nothing to see or talk about here.

It’s rare for me to not have much to say about a film, but here we are. I guess I should get to the positives first, since that will be quick. I thought the look of the film was better than I was expecting for this quality of film - the budget was a bit over $100,000 I believe. Gerald Nott tried to add a bit of stylish shots whenever he could, which made the visual presentation a bit dynamic at times. The special effects were actually decent, with a nice use of squib shots and CGI [wonky at times but not the worst]. The zombie make up was alright, although some zombies looked more defined than others. And the cinematographer, Scott Peck, did his thing boosting the visual quality of the film way beyond than it probably deserved. For a really low budget flick, it looked like it had a higher one.

Also, the film is only 80 minutes. That means it won’t bore you for too long, which I appreciated.

Some of the actors were okay as well. Parrish Randall was alright as main villain Blythe. The script didn’t do him or any of the actors any favors [I’ll get to that in a bit], but Randall made the most of the part and stood out as one of the better parts of the film. I also liked Erin McCarthy as Hunter [Get it? She’s a zombie hunter? Sigh.]. She gets her best scenes near the end and I thought she did as best as one could considering the weak script.

And boy, is this script terrible. The characters don’t have much depth. The plot holes are all over the place. And this film offers you more questions than answers. For example, the film never explains why this zombie apocalypse is going 80-plus years strong. The film never tells us why this world is still stuck in a Western instead of something more modern than that. The Western part is especially problemsome since the film never really embraces that aesthetic [no horses, no saloons, no gun duels] - unless you consider people wearing cowboy hats and attire a Western vibe.

There’s also this main plotline where bounty hunters are murdering zombies to collect their pinkies in exchange for currency. This would be kind of interesting if the script had elaborated more about it. I guess the government enforced this in order for people to kill the undead to maintain the zombie invasion? But considering the lopsided ratio of a hoard of zombies compared to the tiny amount of living humans left, either no one bothered or those who did ended up becoming zombies anyway. And who cares about any kind of currency during a zombie apocalypse? Are there vendors and stores really caring about getting paid while there’s a zombie invasion happening outside of their door? People would just steal and loot whatever they need in order to survive. It’s a really flawed idea that gets more convoluted as the film goes on. In fact, Blythe plans on infecting neighboring towns just to kill zombies and collect pinkies. Why? How does this benefit him or anyone in any way?

It also doesn’t help that our hero seems to be immune to zombie bites or even death, period. Why? Who in the hell knows? The film never bothers explaining it. We get an opening shot where he shoots himself up with a needle. Maybe he’s taking a drug that makes him immune? He compares zombie bites and death to chicken pox and I’m just… confused.

Speaking of our main hero, the actor playing him - Clint Glenn Hummel - is pretty bland and dry to even be interesting or likable. I don’t know if it’s because the script isn’t great, or the fact that Hummel is doing a Clint “Man With No Name” Eastwood impersonation to the best of his ability that makes him kind of dull as a lead. He didn’t leave much of an impression on me and it’s unfortunate since he’s in the film for ninety-five percent of the time.

THE QUICK AND THE UNDEAD is so dull, confusing and flawed that it will make you believe the last few seasons of The Walking Dead were television masterpieces in comparison. The screenplay is a mess - with shallow characters who don’t give the audience a reason to like them, plot holes that leave you asking why, and questionable subplots that aren’t explored at all for whatever reason. The acting is a mixed bag, leaning towards downwards due to a lead actor who is too busy doing a Clint Eastwood impersonation rather than breathing some sort of life to a hero worth rooting for. If it wasn’t for the cinematography, the decent make up and special effects compared to its low budget, some decent supporting actors and a short run time, this film would have been bottom of the barrel for me. For a zombie-western movie, it’s barely a western and the zombies only really appear every now and then for when people need to die. Don’t mistake this film for Sam Raimi’s 1995 underrated THE QUICK AND THE DEAD. One is great and the other one is - well this. Not worth collecting zombie pinkies over.
SCORE