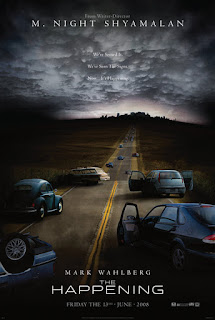 When a deadly airborne virus threatens to wipe out the northeastern United States, teacher Elliott Moore (Mark Wahlberg) and his wife (Zooey Deschanel) flee from contaminated cities into the countryside in a fight to discover the truth. Is it terrorism, the accidental release of some toxic military bio weapon – or something even more sinister? 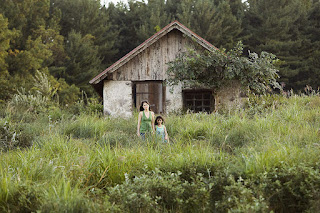 I’m not going to go too deep into M. Night Shyamalan’s 2008 critical disaster THE HAPPENING, which is considered by many to be one of the worst films of the 21st century. You have all seen the memes. There are videos and articles written about why this film is looked down upon. The movie is not good for many reasons - which is disappointing considering the subject matter is quite interesting and could have led to a stronger and better film if executed right.

The central theme of THE HAPPENING is probably the best part of the film, even if Shyamalan has no clue how to tell it in a convincing way. Instead of making it a tense mystery as to why bad things are happening, Shyamalan wastes no time in telling us what’s going on - it’s the plants releasing toxins into the air that makes people lose all sense of themselves to the point of the quickest suicide possible. The wind is constantly a threat to the characters, making them fearful of even going outside in large groups. Characters talk to plants, both real or fake, to show that they’re not a threat to nature. Characters attempt to hypothesize in scientific ways as to what is triggering this phenomenon in the eastern part of the United States. There’s a social commentary being told here by Shyamalan, but he just doesn’t know how to make it resonate in a serious way.

The idea of airborne toxins feels more relevant now, considering COVID, Monkeypox and whatever new viruses are threatening our livelihood currently. Characters are afraid because they don’t understand, even if they think they do. Being in large groups only seems to quicken the threat. Not only are the plants trying to kill people, but so are other people who believe others are carrying the virus and will accidentally give it to them. It’s political. It’s social. This commentary that our destruction of nature has led to climate change and global warming is something that’s still debated about nowadays. These are topics that need to be addressed in a meaningful way, but you won’t find it anywhere in THE HAPPENING. 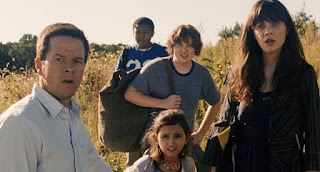 While I’m still on the positive spectrum, I will commend the cinematography. The picture does look really nice and there is some interesting style and shot scales going on here. And the first 15 to 20 minutes of the movie are pretty strong considering the downturn the film takes right after. We see people sticking hairpins into their necks, construction workers jumping off high areas, a domino effect of people taking a cop’s gun and shooting themselves, and so on. There’s even a cool lawn mower demise, as well as a pretty shocking shotgun dummy whammy that takes out two teenagers, which is pretty rare for a horror film. There’s some good stuff going on here. So what happened?
Apparently, Shyamalan wanted THE HAPPENING to be a homage to the B-movies of the 1950s, in particular 1958’s THE BLOB. The characters would be a little bit kooky, the threat would stem from a realistic place within the social culture at the time, and it would be a silly rollercoaster ride from start to end. The problem with this idea is that the commentary for THE HAPPENING is a pretty serious one that doesn’t seem like it could be from the realm of possibility. There are no giant gelatin monsters, giant atomic animals, or even aliens trying to conquer Earth. The idea of nature trying to kill the people who have been making it sick for centuries now is fairly serious. You also have a moment where two teenagers are brutally murdered due to fear and mistrust. How is anyone supposed to find that campy and fun?
It doesn’t help when the scenes involving characters getting poisoned enough to commit suicide are treated with tension and legit horror to the situation at hand. Otherwise, you have atrocious dialogue that no human being would ever say to others, lousy acting from a capable cast, and just poor pacing by a director who ought to know better. The tone is all over the place and it brings down the movie. Bad movies like TROLL 2 or 2003’s THE ROOM embrace their horribleness, knowing exactly what their tone is, which makes those films fun to watch. Shyamalan seems conflicted between his alleged idea for THE HAPPENING and what the studio possibly wants. It’s a no-win situation here.

Shyamalan is obviously a talented filmmaker. He proved it in THE SIXTH SENSE, UNBREAKABLE and mostly in SIGNS and THE VILLAGE as well. But either his ego was too big at this point, or he forgot to tell interesting stories, because THE HAPPENING continued the major downturn after THE LADY IN THE WATER. For a man known for his twists, there aren’t any here. He gives us all the answers right away, taking away all tension and suspense before anyone can settle in. The pacing is all over the pace, making you more bored than anything at times. 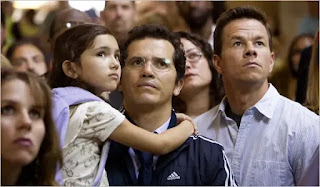 And probably his worst crime - his direction of a capable cast who have done better work before or since. Actors don’t react naturally. They’re required to utter inane dialogue that’s unintentionally funny because it never feels realistic at all. Most of the film is just people walking around and talking about uninteresting things without much momentum. Again, there’s a good movie somewhere within THE HAPPENING but Shyamalan has no idea how to bring that forth. It’s even sadder when you realize that his work would only get worse [THE LAST AIRBENDER, AFTER EARTH] until he would finally hit the jackpot with 2017’s SPLIT.

Speaking of the actors, most of them regret being in THE HAPPENING because they know how atrocious they look here. Mark Wahlberg isn’t the greatest actor or anything, but he’s done much better work. At least he tries here in the role of science teacher Elliot, only because it seems like he does care. But Shyamalan directs him to recite lines and react like an 8-year-old child, which provides an earnest and naive performance that feels forcibly immature. Zooey Deschanel is truly baffling as Alma. All she does really is stare like a deer in headlights for 90 percent of the movie, while reacting to dialogue and situations in a clueless and stoic way for the other 10. Considering Wahlberg and Deschanel are playing a married couple, Wahlberg has more chemistry with a plastic plant than with his fellow co-star. John Leguizamo wants to give a serious performance, but is put in situations where even Daniel Day-Lewis couldn’t salvage. Ashlyn Sanchez adds nothing, feeling more like a background extra than a child star in her own movie. Betty Buckley has unintentionally hilarious moments as a paranoid woman who keeps thinking the protagonists will break or steal her stuff. And Spencer Breslin might give the most memorable performance as a man obsessed with hot dogs [probably the best character moment of the movie]. I hope the numbers on those paychecks were satisfactory. 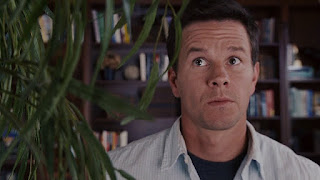 One of the most disappointing films of the 21st century, THE HAPPENING is a film that feels more relevant now due to its interesting commentary. But because of M. Night Shyamalan’s lack of knowing how to tell his story visually and on paper, there’s not a whole lot “happening” in this misfire of a movie. Shyamalan’s attempt at making a B-movie akin to the 1950s falls flat due to an inconsistency in tone, giving away all the answers within the first 30 minutes, and making the film feel more dull than it ought to. The cast just look like fools on screen, barely reacting to things or reciting unconvincing dialogue that comes across as more unintentionally funny than serious. It’s sad when Mark Wahlberg has more chemistry with a plastic plant than his on-screen wife Zooey Deschanel. The film is even more disappointing considering the idea of plants releasing an airborne toxin that hurts people feels way too close to home due to recent debates on climate change and the devastation of COVID. If taken seriously, this commentary could make a movie that’s remembered for all the right reasons. But for whatever reason, Shyamalan was not up for the task, instead making the most memorable thing about the film being about the quality of hot dogs. THE HAPPENING is not the worst film of the last 20-plus years, nor is it even the worst film in Shyamalan’s filmography. But it’s definitely a film that should have been better than it is considering the man is capable of making a thrilling and serious movie that audiences are fond of.