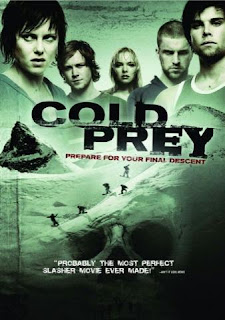 Luckily, Stacie Ponder of Final Girl fame decided to pick a modern slasher as her Film Club choice for July. But she didn't pick just any slasher film. No, she picked one from Norway. A-Ha would be proud, Stacie. FRITT VILT, or COLD PREY to those who don't speak Norwegian, was a pretty big hit in Norway when released in 2006. That allowed the film to be distributed within other countries, including the United States, where it has received some decent praise as well. The question is if this praise is warranted because the film is different from American horror films or because it's actually good? Even though COLD PREY isn't the most original slasher film out there, it still manages to be pretty effective even with its massive amount of predictability. Let's see why slasher fans should get a bit warm by COLD PREY...

PLOT
A group of five friends take a trip to the snowy mountains [in the middle of nowhere] for a skiing and snowboarding adventure. One of the friends accidentally snaps his leg in two, causing the group to help him and find shelter at some hotel that's apparently been abandoned for years. After drinking, clowning around, and taking a tour of the hotel, the group soon realizes that someone else is staying at this hotel. This person, dressed in Eskimo gear, begins killing them one by one with a pick-axe. Will there be any survivors, or will everyone be snowed in?

REVIEW
COLD PREY, even in a different language and location, is still your typic 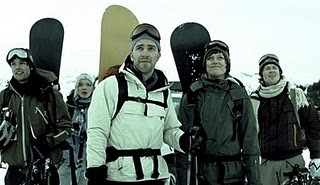 The narrative is your basic slasher formula. We have a group of friends going to a certain deserted location. We have a killer connected to this location. Both parties end up meeting up, making the situation messier than it should be. There's nothing really new here at all. The Final Girl is set up right away and she does what a Final Girl is supposed to do. We have the stereotypical friends of the Final Girl such as the Boyfriend, the Best Friend Who Likes The Final Girl, The Shy Girl, and The Douchebag. We have a killer who's backstory is connected to the motel these characters are staying in. The killer also has a trademark weapon [the pick-axe] and a costume to hide his identity. It's just very formulaic and extremely predictable. You'll know who'll survive longer than most if you've watch a few slasher films in your time.

Even though you can see everything happening in this film from a mile away, I can still appreciate the fact that it's a slasher film through and through without trying to be something else. COLD PREY isn't trying to use self-referential humor to entertain horror fans. It's not using the story to lead up to some sort of weird twist ending to get some buzz and open itself up for a sequel [even though there is a sequel for this film]. COLD PREY knows what it is, does what it's supposed to do, and does it quite well. Is it original? Hell no. But I knew what to expect going into it and it didn't disappoint me. It uses the slasher formula well and I was never bored by the film.

One of the reasons COLD PREY stood out at the time of its release, besides its country of origin, is the setting. I'm sure there have been other slasher films that take place in some sort of tundra where there's all snow and hardly any civilization to help the protagonists. But a snowy setting is pretty rare for a slasher film and I thought the way the whole isolated mountain area was used in the film was done really well. It actually reminded me of THE SHINING for a bit, with the hotel in the middle of mountains of snow. I think it's a pretty creepy setting and it made the protagonists' attempt to survive more of a challenge. It's easy to hide within the woods or a suburban neighborhood. But how do you hide within miles of snow without freezing to death? Either way, you're in trouble. And since I know nothing of Norway, it made COLD PREY more effective.

I also liked the fact that the characters are more develo 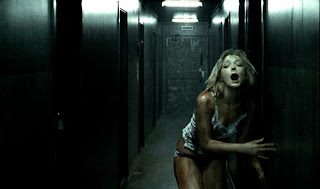 ped than you would expect in a slasher. I'm not saying I know everything about them. In fact, Jannicke and Morten Tobias were probably the two most fleshed out characters while the others were still portrayed in a "cannon fodder" way. Still, it's nice to see slasher characters bonding over drinks and music, and actually having conversations with each other that doesn't involve arguing and sacrificing one another just to survive. They all come across as real people with real feelings, doing real things that I can believe. Even the Douchebag guy was believable because he was never portrayed as over-the-top. I actually kind of cared about these characters and that's pretty rare for a lot of slashers, especially modern slashers. It gave their struggle for survival more tension than I was expecting.

I do wish the killer was fleshed out more, which is probably the biggest flaw about COLD PREY. I knew who he was just by what was presented before he appeared, but that's about it. We don't know his motivations. We don't know how he survived for so long in this area. There are a lot of questions that needed to be answered about this villain that weren't.

The violence in COLD PREY is very tame. We hardly see any gore in this film. We do see blood trails and there is one moment where one of the character's torso gets visibly impaled by a pick-axe. We also get a neck being snapped and stabbings. But most of the kills are off-screen, which doesn't really matter since they're done in a generic manner anyway. And for a slasher, there's no nudity either from anyone. I guess this part of the formula got lost on its way to Europe.

The direction by Roar Uthaug is actually quite good. The film looks extremely polished as it was shot on Super 16mm. I thought the outside cinematography [by Daniel Voldheim] showcasing the snow was really stunning. The look of inside the hotel was beautiful as well. Everything was pretty much blue-grey and dim - which set up a gloom feeling from the start. The editing is solid. The tension and suspense is there somewhat. I'm not sure how much the budget for this film was, but it wasn't wasted in the least. Just a really nicely directed film. It's obvious Uthaug has seen a few slasher films in his time because he filmed a pretty decent one.

The acting in the film is excellent. I won't go into every actor, but Ingri 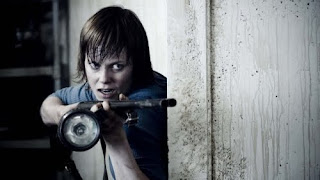 d Bolsø Berdal is fantastic as Jannicke. She's likeable from the beginning, giving probably a one-note character on paper a lot of dimension that was appreciated. She was my favorite for sure. Rolf Kristian Larsen as Morten Tobias was also strong. He had to act like he had a broken leg for much of the film and was actually pretty funny at times. I tend to like characters that are portrayed as the underdog - in this case, he had feelings for Jannicke that weren't recipocated. Larsen played the character well. If I had to point out another actor, it would be Endre Martin Midstigen as Mikal. He played the douchy, bad boy of the group who just wanted to get laid. He had a good performance too because I liked him and hated him at the same time.

- Morten's soul mate is his right hand. 90% of the male population feel the same way.

- This group of friends enjoy hitting the slopes. So do Courtney Love, Lindsay Lohan, and Charlie Sheen.

- Mykal got startled by a red stained bath tub. Looks like Carrie White didn't get to clean her mess after her mom tried to murder her and stuff. Lazy bitch with her dirty pillows...

- Never argue with a girl who says the room is too cold during sex. It's a great excuse in case you have a small penis!

- With just one bullet in a shotgun, Jannicke was afraid to blow her opportunity in shooting the killer. That's why you need Arnold Schwarzenegger around. He never misses a target. Just ask his 9 children [4 of which he knows nothing about]! 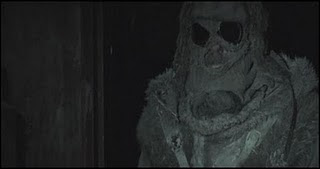 m, but it's a well-made one and worth a look for anyone who loves slasher films. The characters are likeable, the direction and acting is solid, and the setting definitely compliments the film. It won't completely rock your socks off but it's more than serviceable nonetheless.