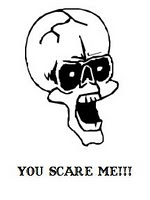 Wow, so Petunia Scareum of Deadly Serious [FOLLOW HER!] has created a blog award called the "You Scare Me" Horror Blog Award to acknowledge Horror Bloggers who, as she says, deserve their day in the sun or moon. She named me the first ever recipient of the award and wrote a wonderful statement as to why I was picked that really touched my heart. Sometimes I wonder why I even do this blog and it's great people like Pete who remind me why. So thank you Pete for this award and for commenting on my posts. It truly means alot! :)

Here is how this award works.
1. You must thank the blogger who sent it to you.
2. You must choose two Horror Bloggers that you feel are outstanding and deserve to be recognized for their work and dedication to the Horror genre.
3. You must describe why you think each recipient deserves this award.

It was really hard only being able to choose TWO Horror Bloggers because I think there are so many out there that are just truly incredible. But I had to pick the two that inspire me to become a better horror blogger and actually reveal me to movies I probably would have never known unless I took a day off to research. So here are my two choices:

I've known the other Fred for over three years now, thanks to MySpace. I believe he read my WEIRD SCIENCE review and wanted me to write for his Phantamorte MySpace page. Ever since, we've always commented on each other's stuff and helped each other whenever there needed be. We both love the same things pretty much, although his taste for horror is a bit more European and exploitative than mine is currently [I'm getting there, Phantom!]. But he always takes his reviews seriously, always giving you information that may not have known about, as well as throw in some humor when there's a need for it. Because of him, I remembered movies that I had long forgotten about, or I'm introduced to some crazy ass shit that I want to see and add to my Netflix queue. He was pretty much one of the first of our MySpace crew to start doing video reviews and has since become a reviewing star on Midnight Confessions and on YouTube with his over 400 subscribers - all well earned since he was my inspiration to doing video reviews in the first place.

He's always been a true friend to me and never has an ego about things. He truly loves film and graphic arts. Without him, I probably would have stopped reviewing a long time ago. One of these days, we will meet and our reviewing powers will combine, creating a massive crash in the reviewing blogosphere that will be felt for years to come. But until then, he gets a "You Scare Me" award.

Zach was one of my first Blogger followers back in 2008 and has always supported me quietly ever since. His blog is incredibly impressive and so damn entertaining. He writes reviews with a chock-full of information and trivia that I wouldn't have known until reading his stuff. He's another blogger that introduced me to other films I have never seen, broading my horror film knowledge tenfold. He has different segments for his blog, like "Once Upon A Time In Italy", "Ladies Night", and so forth - all equally entertaining. He never shies away from a film, even if it's cinema trash, always giving us his honest opinion whether it's good or bad. Zach is a true horror blogger in every sense of the word and definitely one of my biggest inspirations. If you haven't checked his stuff out, then you definitely need to. He gets my second "You Scare Me" award.

Email ThisBlogThis!Share to TwitterShare to FacebookShare to Pinterest
Labels: award