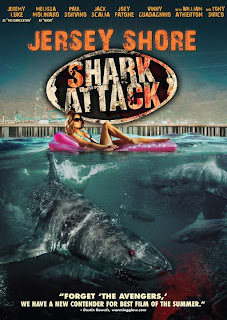 
PLOT
It's your typical holiday weekend at the Jersey Shore. While the Guidos are celebrating, the Preppies want to take the Shore for themselves by starting crap with the Guidos. As they feud, Mayor Palantine (Paul Sorvino) is ordering for some illegal underwater drilling at a local Seaside Heights pier in order to raise the property value and gain some money for the community. Unfortunately, a school of albino bull sharks are attracted to the vibrations and begin a hunt for anyone in the Jersey Shore waters.

After a friend of theirs is killed by one, popular local guido The Complication (Jeremy Luc) and his friends Paulie Balzac (Daniel Booko), J-Moni (Alex Mauriello), Donnie (Joey Russo), and BJ (Audi Resendiz) decide to take matters into their own hands after the police [including The Complication's sheriff dad (Jack Scalia) and the local government] discredit the shark attacks. It gets more personal when The Complication's ex, Nooki (Melissa Molinaro), decides to hang out and sail with the Preppies on their yacht, which soon happens to be surrounded by these albino bull sharks. 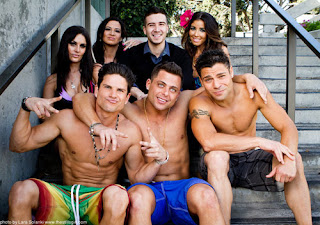 - Screenplay: JERSEY SHORE SHARK ATTACK should not be expected to have a quality script. Inspired by the extremely popular MTV reality show, the screenplay is dumb, cheesy, and will probably be forgotten about within the next five years due to its novelty factor. The main characters in the film are obvious attempts at parodying the cast members of Jersey Shore, while adding the usual premise to JAWS to bring in the shark element. You would think these two things wouldn't mix so well, but surprisingly, the script doesn't suck!

While there's not a ton of depth to this story or its characters [besides The Complication or Nooki, who are the focus out of everyone], you can tell that the screenwriters are somewhat fans of the MTV reality show and doing this for fun, rather than to insult a popular television show and pop culture topic. Most of the Guido characters resemble and act like their real-life counterparts at times, especially Pauly Balzac [who does the occasional "Yeah buddy!" like Pauly D]. While it does get a bit tiresome by the third act, you get who these characters are somewhat and find their antics silly, yet entertaining.

The Complication and Nooki are the characters with the most depth, since they're on-and-off again romantic relationship is the nucleus for the narrative. Since he's so "Complicated" with his washboard abs and charm, he has trouble staying faithful to Nooki. Having enough, Nooki exits the relationship and decides to flirt with The Complication's enemy, Bradford, who is one of the main Preppies. Even though the two try to make each other jealous, they're too stubborn to forgive and forget. It's not until the threat of the sharks that they realize they're meant for each other. It's not a complicated love arc, but it's efficient enough to carry the story. The Complication also gets more depth through his Sheriff father, who is a good man, proving that The Complication is a good guy but just really misguided in life. This makes him likeable enough. The other Guidos are charming in their own respective ways as well, even if you wish the sharks would eat them due to feelings over their real-life counterparts. Let me just say, in that aspect, you might feel disappointed. I know I was.

As for the sharks themselves, it's your typical plot device for most of these films. The sharks are attracted to the vibrations done by an evil corporation, releasing them into the ocean and killing people. We even have a greedy Mayor, who refuses to listen about the shark attacks because he wants to build a lot of money for Seaside Heights. We also have Captain Salie, who is JERSEY SHORE SHARK ATTACK equivalent to Quint from the classic JAWS, giving the characters information and sort of leading them out to sea to take care of the sharks themselves. Sure, it's a bit lazy but at least it's a great film to rip off.

I thought the best part of the narrative was actually bringing in some factual history about possible shark attacks at the Jersey Shore. Captain Salie mentions about shark attacks back in 1916, which I actually researched to find that these attacks really existed. Apparently between July 1 and July 12, 1916, four people were killed and one was injured. It was believed that a great white shark and some bull sharks were involved in the murders. This event actually inspired Peter Benchley to write a little-known novel called Jaws, that inspired a film of the same name no one ever watched. Seriously, I think it was a nice touch to add that realism to the film. It's not something I would actually expect from a film called JERSEY SHORE SHARK ATTACK. Call me pleasantly surprised.

I do think the story could have been campier and cheesier than it actually was. The love story stuff played a bit too serious for this kind of film, but none of the main characters ever really feel as if they're in real danger [although this happens somewhat in the final act, but not much]. I also think there were too many players in the game, which lessened the depth of the characters and the story. A lot of subplots either ended too soon, didn't end at all, or fell flat. It's obvious the screenwriters wanted to throw everything in here and the kitchen sink, taking advantage of that luxury. And while some of it does work, I think focusing mainly on the Jersey Shore idea mixed with sharks while leaving some other subplots out would have made JERSEY SHORE SHARK ATTACK more fun than it was. Instead, it would rather focus on the Guidos vs. the Preppies, which isn't written strongly and feels so cliche that you stop caring by the final act. 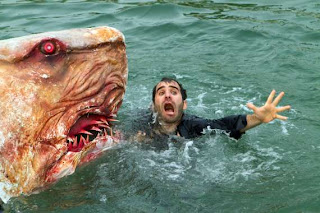 - Direction: The visual presentation by John Shepphird [a pseudonym for B-movie icon, Fred Olen Ray] is hit and miss for me. What I did like are the use of the transitions and the opening credits. They are modeled by the Jersey Shore show, making them a nice touch. I also thought some scenes did have a bit of tension at times, plus some surprises as well. But other than that, it's pretty much a point-and-shoot affair. Not much style here at all and looks like you're average SyFy Channel feature. I was hoping it would look more like the reality show, because that would have been a nice touch. Shepphird already used the transitions and stuff. Why not go all the way, you know? If you're going to somewhat parody the Jersey Shore, don't half ass it. I didn't hate the direction, but there wasn't much interesting about it either. It was what it was.

- Acting: For a film called JERSEY SHORE SHARK ATTACK, I was really expecting terrible acting. While the thespian work isn't fantastic or anything, it's a lot better than I thought it'd be. Not all the actors are all that great or memorable, but some do stick out. I thought Jeremy Luc was good as The Complication. I wish he had played the role more like a douche, because that's how I view The Situation, but he's the hero of the film and had to be likeable. In that context, Luc works and looks the part. Melissa Molinaro was also quite good as Nooki. She was way hotter than her real-life counterpart, but brought the same sort of sass and slight cluelessness the real Snooki seems to be known for. I thought Daniel Booko and Joey Russo were very good as Pauly Balzac and Donnie, really playing up their roles to be as similar to the real Pauly D and Ronnie.

I thought the veteran actors were solid for the most part. This goes especially to Jack Scalia as Sheriff Moretti, who plays the hero cop really well. In fact, he was the best actor in the film for me. Tony Sirico of The Sopranos also does well as Captain Salie. Paul Sorvino and William Atherton are decent in their cameo roles. And I thought Joey Fatone was pretty funny as himself. I'm sure Justin Timberlake loved the shoutout he makes during a complaint about performing at the Jersey Shore. As for real Jersey Shore castmember Vinny Guarindino, who plays a hyper reporter during certain intermissions to explain what's going on [which got quickly annoying], he should stick to trying to 'get it in' on the Shore. Decent-to-good stuff here. 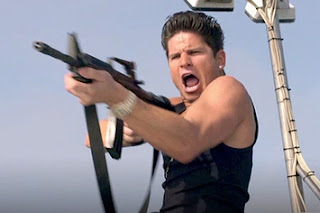 Not a totally violent film, but it does have it moments. We get fist fights. We get a final act full of Guidos shooting guns to kill the sharks. Sharks kill stupid people in the water, and out [sorry Joey Fatone]. We see detached heads, torsos, arms, and other body parts. Not the most realistic violence, but it gets the job done.

SEX
I think the actual reality show has more sex, as JERSEY SHORE SHARK ATTACK is pretty tame. While we do get certain sexual innuendos [one character mentions giving a girl some "protein"], there's really no sex scenes or anything. We get a lot of girls in bikinis. A lot of the guys are shirtless. We even get a wet T-shirt contest [where the girls are wearing bikinis underneath - what's the point?]. Just standard stuff really.

CHEESE
Just using the Jersey Shore brand is cheesy in itself. But we do get horrible, yet laughable CGI. Joey Fatone gets eaten by a flying shark. We have actors playing convincing Guidos, who enjoy shooting sharks with AK-47s. I do think the film takes itself more seriously than I would have liked it to, but it's cheesy enough to be fun. 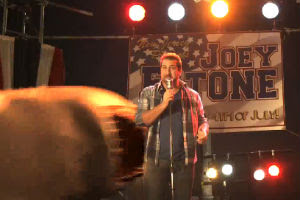 JERSEY SHORE SHARK ATTACK is a surprise and a disappointment at the same time. It's better than you would believe if you like silly B-movies involving sharks with decent direction, good acting, and pretty solid narrative [at least for a film like this]. But expecting certain characters getting eaten by sharks, due to their perception by society, and not getting to witness that was a huge flaw for this movie. Also, it could have been cheesier considering its source material. JERSEY SHORE SHARK ATTACK starts out pretty strong, but grows tiresome by its conclusion. But it was above my low expectations for it and worth a look if you like stupid shark movies. A possible rental, but not a buy at all. 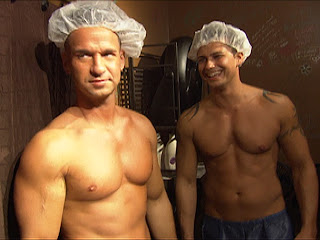