A few weeks ago, I posted a press release on a very anticipated indie horror film called V/H/S and promised I would post more if new information was sent in to me. Well, not only has a red-band trailer for the film been released, but a regular green band trailer has also made a presence. Looks like an awesome time. 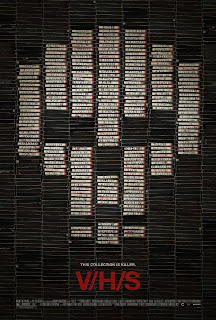 Here's the synopsis for V/H/S:

When a group of petty criminals is hired by a mysterious party to retrieve a rare piece of found footage from a rundown house in the middle of nowhere, they soon realize that the job isn’t going to be as easy as they thought. In the living room, a lifeless body holds court before a hub of old television sets, surrounded by stacks upon stacks of VHS tapes. As they search for the right one, they are treated to a seemingly endless number of horrifying videos, each stranger than the last.

I also have news on another anticipated horror film. [REC] 3 finally gets a red band trailer that also looks pretty sweet. Magnet Releasing will distribute the film on VOD on Friday, August 3rd. Those who want to see it in theaters will get a chance when it's released selectively on Friday, September 7th. As a fan of this series so far, I'm looking very forward to this one. 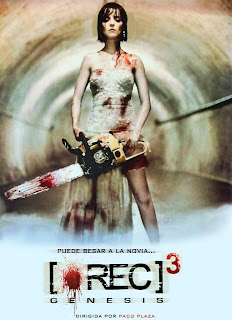 Koldo and Clara are about to celebrate the most important day of their lives: their wedding. Everything appears to be running smoothly and the bride, the groom and their families are enjoying a wonderful day in the countryside until some of the guests start showing signs of a strange illness. Before they know what’s happening, the bride and groom find themselves in the middle of a hellish ordeal, as an uncontrollable torrent of violence is unleashed on the wedding. What started off as an idyllic day quickly descends into a nightmare of the worst kind…

It has a running time of 80 minutes and is rated R by the MPAA.