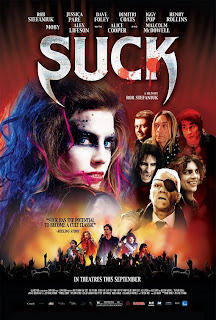 
PLOT
The Winners are a pop-rock band that are having trouble living up to their name. The lead singer, Joey Winner (Rob Stefaniuk), is so focused on making the band successful that he's blinded by what's in front of him. Joey lost the love of his life, Jennifer (Jessica Paré), who happens to be the bassist. His relationship with his current girlfriend, Susan (Nichole DeBoer), isn't great either. The rest of the Winners, Tyler (Paul Anthony) the guitarist, Sam (Mike Lobel) the drummer, and Hugo (Chris Ratz) the roadie are frustrated by Joey's situation.Things for The Winners begin to rapidly change, as Jennifer suddenly becomes attracted to a groupie named Queeny (Dimitri Coats). What she doesn't know is that Queeny is a vampire and he seduces Jennifer into becoming one as well. Although already sexy, her vamp state makes her even hotter and gives her a magnetic stage presence that music fans can't keep their eyes off of. Unfortunately, her new condition has left Jennifer killing people for their blood, leaving Hugo [as her Renfield] to clean up each mess. Jennifer tries to convince the band to turn and use being vampires as a way to gain what they want: fame and fortune. While most of the band is willing to go for it, Joey is hesitant. A creepy bartender (Alice Cooper) tells Joey to go for it, while his studio owner Victor (Iggy Pop) tells Joey to really think about the repercussions.Meanwhile, the vampires are being hunted by Eddie Van Helsing (Malcolm McDowell), who wants to kill every fanged creature for what they [especially Queeny] did to his old girlfriend (Barbara Mamabolo) back in the 1970s. Will everyone involved get what they want? Or will things start to SUCK?

HITS
- The acting. I thought, besides the cameos, that SUCK had a very cool cast of actors. Rob Stefaniuk, who also wrote and directed this film, can also act very well as lead singer, Joey Winner. He's plays the straight man to the comedy believably and I thought he did a good job keeping the film together. Jessica Paré was a lot better as Jennifer. She has got to be one of the sexiest vampires to have ever graced a television or movie screen. She has a presence you can't ignore, plus she had nice comic timing and seemed to be having fun in her role. Malcolm McDowell, although not in the film as much as I would have liked him to be, does a fine job as vampire hunter Eddie Van Helsing. He brought a sense of class to the film by being all McDowell-y. Dave Foley is pretty funny as the band's manager. I think of the main cast, Chris Ratz was really the last standout. He has the best lines as the French-Canadian roadie who was the Renfield of the film. I thought he was pretty funny.

- The cameos. SUCK has a lot of cool appearances that really heighten the fact that this is a horror-comedy that's definitely rooted in rock-and-roll. Alice Cooper plays a creepy bartender who may, or may not, be a vampire. His daughter, Calico, plays a waitress. Iggy Pop plays Victor, who runs the recording studio for The Winners. Henry Rollins plays a jerk of a DJ in a great bit. Rush guitarist Alex Lifeson plays a Canadian border patrolman in a funny scene. Dimitri Coats from Burning Brides plays Queeny, looking like the Mad Hatter from 2010's ALICE IN WONDERLAND. My favorite, however, had to have been Moby, playing Beef Bellows - a metal singer of the band Secretaries of Steak. He was a douche and a self-proclaimed ladies man. Seeing Moby in a role one wouldn't expect out of him, since he's an electronica/techno artist, just made me laugh in a good way. Just a great sign of respect for these artists, who did a bang up job in making SUCK very memorable.

- The soundtrack. Just a rockin' soundtrack, which SUCK should have. The Winners have the majority of the music, which I dug. Plus we have music by Alice Cooper, Iggy Pop & The Stooges, David Bowie, Burning Brides, and The Velvet Underground. This is what a music-horror film should sound like. Definitely created a mood and atmosphere that makes SUCK more successful than it has any right to be. 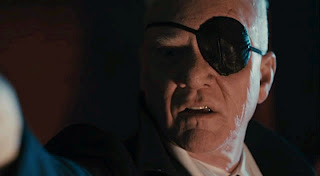 flashback for Eddie Van Helsing, where he watches his love sing and then get seduced by Queeny, we get clips interspersed with current footage from the 1973 Malcolm McDowell film, O LUCKY MAN! At first, I thought Stefaniuk had found a way to make CGI so powerful, that it turned McDowell young again. But he cleverly used footage from another film that fit in perfectly to the story, making the flashback one of the most convincing flashbacks ever. Just amazing and cool of McDowell for even allowing the footage.

- Exciting direction. Rob Stefaniuk did a great job behind the lens. We got a few montages that look like music videos. I thought these were great, as it really reminded the viewer that this film is about rock-and-roll first. Plus they were shot well and pretty funny. I also loved the scenes where the band performed on stage, as they had tons of style - from slo-mo to slick angles. I loved the stop-motion scenes where a toy hearse was driving on a map whenever the band traveled to another venue. I thought they were cute. I also thought the pacing was good. The editing was iffy at times, but mostly okay. The film is low budget, but looks great thanks to nice cinematography and excellent lighting - especially for the vampires. Each vampire had a glow about them, making them stand out in each scene they were in. Just like characters in the film, the viewer can't take their eyes off of them. I thought that was a great touch. Just really cool visuals. I dug it a lot.

- Good script. The screenplay by Stefaniuk is pretty standard if you've seen any other film where a rock band goes through trials to become big and famous, which leads to dissension and an inevitable downfall. But the vampire aspects, as well as some comedic moments, help make it seem a bit fresh again. It never takes itself seriously, as it doesn't send a message that reads 'Be careful what you wish for...yadda yadda.' It's a satire of the fickle music industry, one Stefaniuk knows all about since he's been a member of bands. In a lot of ways, the vampire aspect is really a horror way of conveying the idea of addiction. Jennifer, once she becomes a vampire, is completely addicted in killing others for their blood. When she promises she won't turn her fellow members into vampires, she breaks it and does it anyway because she couldn't help it. It's this addiction that helps the Winners gain popularity and much success, as the typical rock-and-roll lifestyle is making them legends in the industry. It's the band at their most creative, which is cliche but it works. It's not the best written film, as some of the characters could be deeper and some aspects of the story could be stronger [the vampire hunting stuff could have been paced a bit better]. But for the most part, it's a solid script.


MISSES
- Comedy hit and miss. SUCK is a 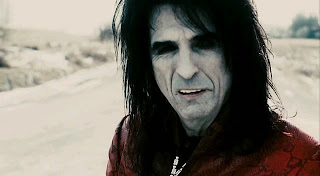 satire, so obviously the film will have comedy to get its point across. Not all the jokes work, however, as I wasn't laughing much for a pretty decent amount of time. Stefaniuk had a really tough balance here with trying to do horror, music, and comedy all in one. A film like THE ROCKY HORROR PICTURE SHOW did it well. And while SUCK does have great music and enough elements to make it a horror movie, the comedy could have been better. A lot of it is predictable and cliche, which hurts the pacing and dialogue a bit. It does have great comedy moments, however, but it's not a total success.

- The ending. I really didn't like the way the film concluded, sorry. It just seemed out of place and unnecessary in my opinion. I get what it was trying to get across and why it was there, but it did nothing for me really. It felt like a set up for a sequel rather than a logical end to this story. I guess it was supposed to be ironic, but I just didn't dig it. Oh well.


THE FINAL HOWL
SUCK does not live up to its title. 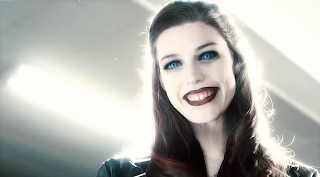 It has a lot of charm due to its decent script, solid musical numbers, energetic direction, and cast of actors and rock stars. I honestly didn't think I would enjoy it as much as I did, but I'm glad I took the risk and streamed it off of Netflix. If you're looking for a vampire film that's Canadian and focuses on great songs and decent comedy, SUCK is right up your alley. Definitely an underrated gem more people need to bite into.